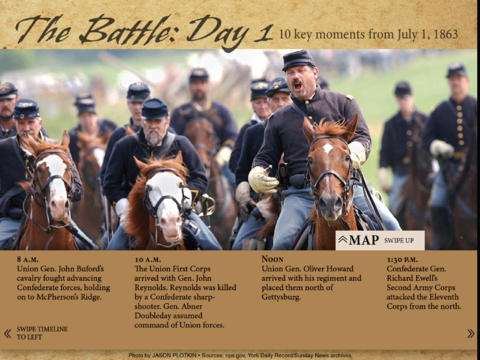 ‘Gettysburg 150 facts about the 150th,’ an iPad app developed by Digital First Media newsrooms, is a finalist for the Eppy Award, Editor & Publisher’s 18th annual contest. This is a page from the app.

The York newsroom, the Hanover Evening Sun, Chambersburg Public Opinion and Lebanon Daily News teamed up to produce a GameTimePa.com app that won in under 1 million unique visitor competition. It was entered and awarded under the GameTimePa.com brand.

The York Daily Record led an effort with the Hanover Evening Sun and Chambersburg Public Opinion to produce a Gettysburg 150 app, as part of Battle of Gettysburg 150th activities. Gettysburg 150 Facts About the 150th also scored as a finalist in the same category.

A winner will be declared on Oct. 30.

This is the third straight year that the York Daily Record/Sunday News has scored well in EPPY competition.

In 2011, the YDR’s Jason Plotkin won a category for “Carrying Darisabel.”

In 2012, the YDR entry “Finding Their Way Out,” a retrospective on the 2003 Red Lion school shooting, received a nomination.

This is the logo for GameTimePa.com, a high school sports website that covers prep sports across the southern tier of Pennsylvania. An app connected to the website is an EPPY Award nominee.