Covering news in the newsroom 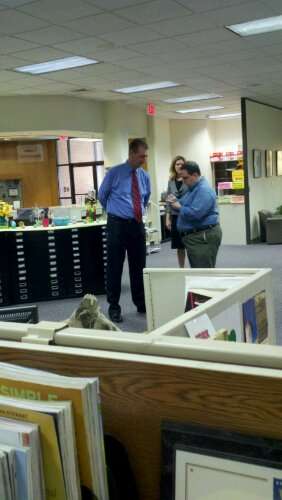 This morning, business editor Cathy Hirko walked by reporters Sean Adkins and Ashley Wislock. She told Sean to grab his notepad and Ashley to grab her phone and start tweeting because there was going to be an announcement.

Managing editor Randy Parker told photographer Jason Plotkin to get his camera, and Jason rushed to record the moment.

Minutes later, everyone found out that publisher Fred Uffelman was retiring and that Sara Glines would be the new publisher of York Daily Record/York Sunday News.

Sean took notes during the announcement and went to work getting individual interviews afterward.

At right, he talks with Jeff Bairstow, president of Digital First Media.