Posted by YDR InsiderJanuary 27, 2014 Behind the scenes, Editor, Newsroom visitors 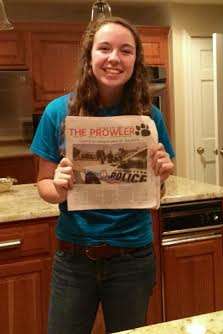 At about 6:30 a.m. a week ago, a high-school age girl stood at the York Daily Record/Sunday News’ side door as the snow was starting to fall.

She was at our Loucks Road plant to pick up copies of ‘The Prowler’, Central York High School’s student-run newspaper. No one had answered in the loading dock area in the back, so she was trying another door.

I let her in and accompanied her through our cavernous building to the mailroom where her school’s newspapers were stacked after printing.

I introduced myself as we walked. I was delighted to be in the company of the ‘The Prowler’s’ editor, Erin O’Neill.

We talked shop, of course.

You know. I said how much I like her Central colleague Sarah Crawford’s work on our Teen Takeover staff. She talked about how she would distribute the newspapers. We talked about how school was closed that day because of the snow.

As we walked and talked, I was thinking about how this young journalist had the stuff to be a fine editor some day.

She was here at dawn on a snowy day. Finals were coming up. She had a big stack of newspapers to haul into her car and then transport alone through the snow to the school.

The staff of Central York, Pa., High School’s student-run newspaper ‘The Prowler’ is joined by language arts teacher Cindy Hogentogler, left, in this 2011 photo. That was the year that the instructor earned a scholarship to attend the Reynolds Journalism Institute at the University of Arizona.