Posted by YDR InsiderApril 6, 2014 Awards and honors, Behind the scenes, Blogs, Smart

April Trotter has been named to Editor & Publisher’s 25 under 35 list. E & P said of the award: ‘Our nomination form for this year’s 25 Under 35 feature asked for “people who are young, bright, and capable of tackling whatever the changing newspaper climate throws at them. People with business acumen to lead through trying times and vision to implement bold, new strategies to move their newspapers forward.”

This is the second straight year a YDR staff has garnered the honors. GameTimePa.com editor Lyzz Jones was on the list last year. 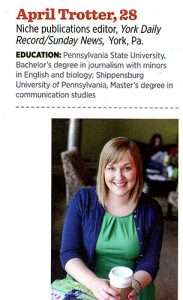 April Trotter is a one-woman band. As the editor of the Smart magazine brand, she expands the reach of what was once merely a glossy magazine to audiences on multiple online channels, from blogs to Google+ to Pinterest to Twitter and Facebook. As an assistant features editor for the York Daily Record/Sunday News, she works with reporters to develop award-winning content and packages. And as the regional niche publications editor, she leads many unforeseen special efforts, such as a last-minute tab focusing on breast cancer awareness. Last year, she also led a team of journalists who developed the outstanding Smart Cookies iPad app — a collection of more than 120 local recipes. This was all new work for Trotter and her team, but they taught themselves how to use Adobe DPS to create a stunning presentation. They also produced how-to videos and incorporated them into the app.

What advice do you have for other young professionals in the newspaper industry?

Find your niche. And be creative—even if it’s on your own time, at first.

If you want journalism to be your career and not just a 9-5 job, it’s important to find something in the field that makes you happy. Maybe that’s being a cops reporter or a page designer or managing the company’s social media accounts or manning the breaking news desk.

As niche publications editor, I plan events, build a brand, direct photo shoots, manage social media and perform a host of other (fun!) duties in addition to traditional editing and story assigning for the magazine. I’m also highly involved in community engagement and guerrilla marketing through the York Daily Record’s other efforts.

What is the mission of Smart and why do you think it’s so important for a newspaper to have a magazine for women?
Smart began in 2007 as a place for women to share ideas, be inspired and learn about south central Pennsylvania. We want readers to see their friends modeling clothes from a local boutique and learn about what local businesswomen are up to and find ways to decorate their home from their design-savvy neighbors in every bimonthly issue. 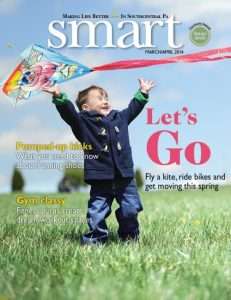 We share the news that matters to women in the 35-55 demographic in a way that ensures they’ll actually read it. And, from a business standpoint, Smart’s target audience allows advertisers to reach those who make the purchasing decisions for their home and family.

Smart is a challenge in that the position pushes me to think about advertising and marketing and what is working and what isn’t. Building and maintaining the brand requires interdepartmental cooperation and the ability to walk the line between advertising and editorial. It also involves taking a hard look at numbers and strategizing ways to grow them with input from those other departments.