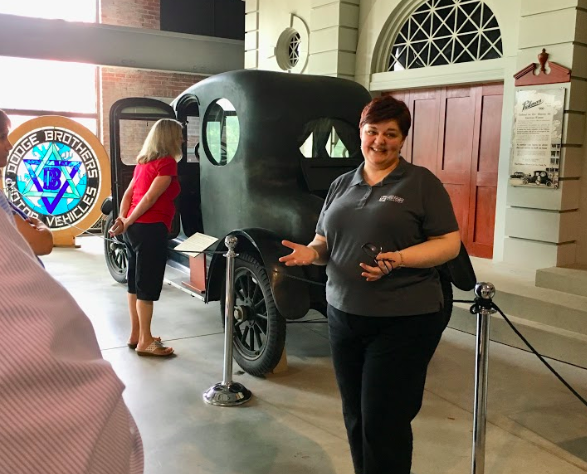 Leaving the Agricultural and Industrial Museum, I felt excited.

Like when you’re driving home from work on a Friday, the window down, your left arm gliding over the air currents that force your fingers up and down in a wave. Right hand gripping the steering wheel with your thumb tapping because the best song just came on the radio. Energy and ideas flashing into consciousness between green lights and passing brick buildings.

This is how I felt after the first York County History Center Education Committee meeting.

I wasn’t approached to be on the committee. But when Dallastown teacher Tom Melhorn suggested I join, I unhesitatingly searched for the History Center’s Parthena Bowman’s email address. A few years ago I took a personality test that focused on career development.

My weakness? I wait for opportunity to knock. Whoever came up with that saying didn’t understand that opportunities don’t knock. They’re the elusive white tail deer that stands broadside in a field. Once it’s seen, it’s up to you to go after it.

So, I emailed Bowman and extended my inquiry to join the committee. She enthusiastically accepted.

If you haven’t heard, the York County History Center will be moving to the former Edison steam plant building on West Philadelphia Street. With the move comes many exciting new changes and additions including a committee of educators to create ways to engage youngsters.

Back in January, I gave an update. Here is the most recent information about what to expect at the new YCHC.

As Bowman, the director of education, led the 10-12 educators making up the education committee around the Agriculture and Industrial Museum, she pointed out the macro artifacts moving to the new locations. Items such as the Conestoga Wagon, the a Phineas Davis engine, a the diesel tractor, and Reddy Kilowatt will shine with importance within the new museum.

In fact, Reddy Kilowatt will be lighting up the lobby leading to the “energizing wall” that anchors York’s energy history through a STEM lens. Known as “The Show Stopper” by YCHC designers, the massive ice machine, will be waiting in the rear of the center, building curiosity in visitors. Additionally, the mezzanine will provide a second-story view of the engineering feat.

Others, such as the 1916 Pullman DeLuxe Couple, also known as the Opera Car, will not only survive but will be reimagined. For example, Bowman pointed out that the artifact highlights the automobile manufacturing history in York. However, the automobile contains so much more depth than sheer industrial history.

Geared toward women, the shape resembles Cinderella’s carriage including curtains on the windows. With an advertisement that reads “Tailored for her majesty the American Woman,” it’s easy to see how Pullman steered their sales toward York County ladies. Furthermore, the C-H magnetic Gear Shift, Bowman tells me, switched gears at the “touch of a button.”

At the new location, the automobile will also include women’s role in York’s history including suffragettes and other social histories, especially since a group of local women raised funds to purchase the car to exhibit and continue the story.

“We’re re-thinking how we tell stories,” Bowman told the group.

Anther reinterpreted artifact will be the printing press. Right now, guests  become lost in the plethora of mysterious gears and plates. But, the press will more clearly explain York as the site of the printing of paper money when Congress visited here in 1777-78.

As we’ve been told, the campus feel will run alongside the revitalization of the downtown. With Codorus Creek renovations coming soon, YCHC will be in the hub of that transformation.

As for the architectural design, the YCHC want it to be aesthetically pleasing yet functional as well as fitting with the historical integrity of the building.

Parking for buses, the rail trail, and the central location all create a viable new spot that highlight York’s history.

Joan Mummert, the YCHC’s CEO, wants to provide an experience that attracts all different visitors to the new center. For instance, the York Plan will be presented in a way that allows streakers to fly past and leave with the big ideas, the strollers to open the lid to peak at the history inside, and the scholars to plunge head-first into the complex stories that are York’s past.

With limited space, the YCHC is problem-solving ways to allow for the “scholars” to go more in-depth. So, digital touch screens will open pathways to un-chartered territory without expanding the walls into the neighbor’s plot.

Furthermore, all ages and skill levels will find their entry point into history. A wallpaper machine, for example, will show big ideas for kids, details for teens, and complexities for adults.

The Waldron Press will feature cylinders used to make wallpaper that kids can touch! Parents and visitors will be happy to learn all the interactive elements of the new center.

To humanize the experience, a “Meet the Worker’s” section allows students of all ages to learn about the people who operated the machine, the conditions of the shop, and compare history to today. Instead of taking for granted all the material, consumer products we have in our homes, the new YCHC will unveil the making and history behind the treasures we absentmindedly use on a daily basis.

As we walked and talked about the future of YCHC, Bowman illuminated possibilities parallel to seeing electricity for the first time! Like any good teacher, she fostered a curiosity in which I wanted to learn more.

Fun educational projects for the future

While the group of educators brainstormed during our meeting, ideas after ideas ignited my neurotransmitters like a fireworks show.

Troy Strayer, a middle school social studies teacher at Red Lion, pitched ideas such as scavenger hunts, break-out rooms, Google expeditions, augmented reality, archeological digs, lesson plans for teachers all over the county, and downtown banners. Maybe even exhibits that engage all the senses such as smells, sounds, sights, and maybe even taste and touch!

The goal is to get kids as well as the general public to know and appreciate York’s engaging history.

There’s no guarantee that all these ideas will come to fruition. But so far, YCHC is off to a great start. If you’re interested in helping out, contact Bowman for more information.