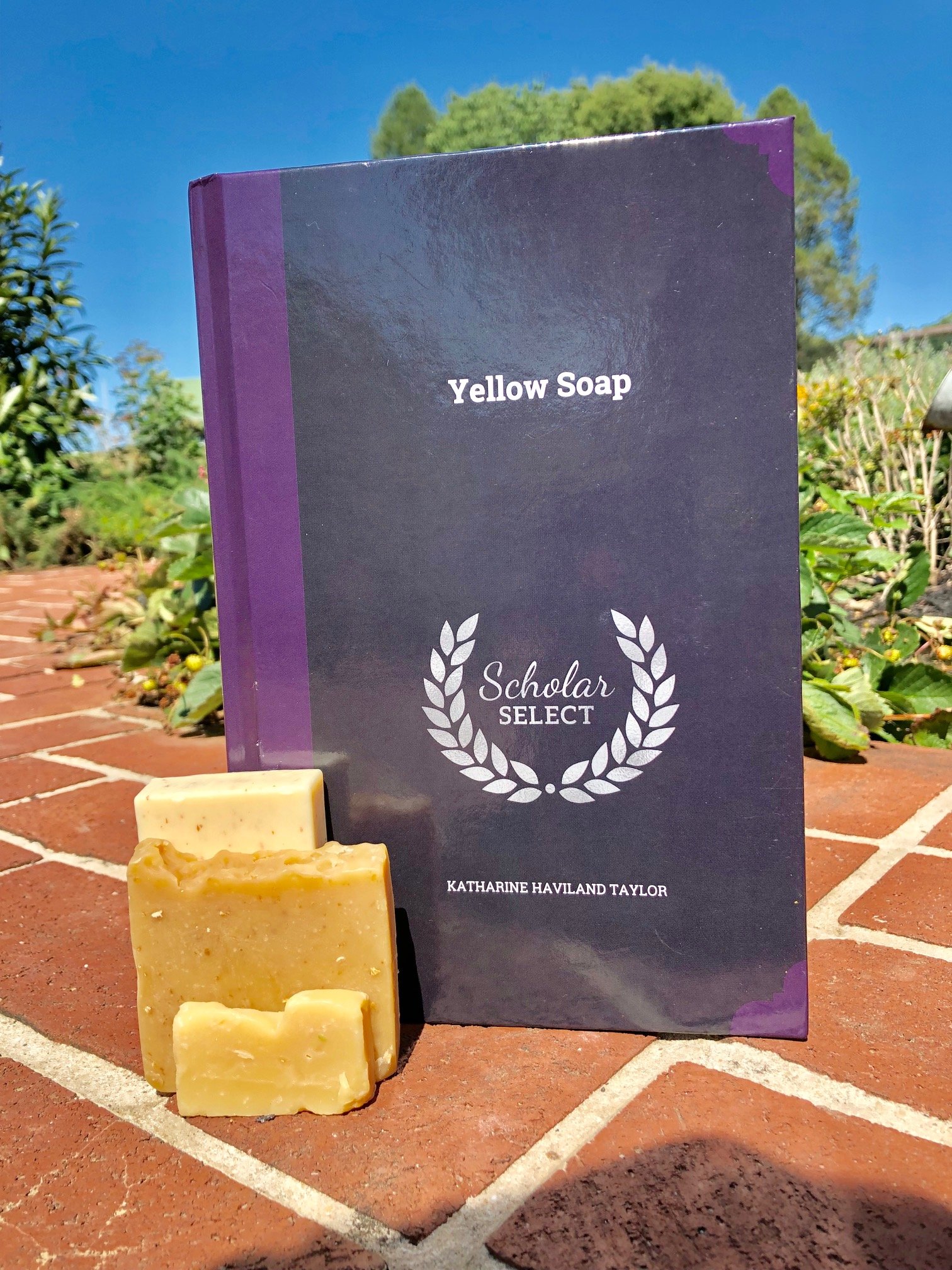 The haunting smell of yellow soap: An author’s portrayal of poverty in 1900s York

Thinking back to your childhood front porch, what kind of materials made up your steps? For Hargraves, a fictional character from York, his wooden steps meant a life of poverty.

Largely a love story, “Yellow Soap” by Katharine Haviland Taylor traces the life of a young man named Hargraves Bradly. Taylor, an author and artist from York, published the novel in 1920 and loosely based the setting in York.

Delia, Hargraves’ mother, became pregnant out of wedlock or her husband left her – it’s unclear. At a time before paternity tests and child support, Delia raised Hargraves on her own, complete with early-1900s shaming. The townspeople constantly reminded her of her transgression from subtle side-glances to outright denying her employment.

Finally finding work as a maid and dishwasher for a wealthy family, the Miltons, Delia sometimes allowed her son to accompany her to work. During those visits, Hargraves witnessed how the other half lives. The smell of the yellow soap from his mother’s wash bin overwhelmed his olfactory senses. The memory of this smell would walk beside him into adulthood.

Delia didn’t make much money. To feed her son, she rescued half-eaten food bits from the trash. It was common for Hargraves to eat bread with bites taken out of it and repurposed ham in soups. Their apartment in an alley of downtown York creaked with drafts of cold wind.

Within the Victorian-era home of the Milton’s, Hargraves gazed at plush carpet, beautiful gardens, and brownstone steps. These steps would come to symbolize the divide between him, a poor boy with wooden steps, and Frances Milton, the young lady whose steps were made of stone. But Frances Milton ignored the class quagmire between her and Hargraves. She appreciated his kindness and treated him as an equal.

The author’s use of imagery to capture the grand opulence served as a reminder to 1920s readers – the wealthy had their place and the poor had theirs, and they rarely mingled. “Santa Claus only visited places were the front steps were stone,” Taylor wrote. Hargraves wished he was a socialist so he could get some presents. “If one lived in a house with brownstone steps, one’s mother did not smell of yellow soap,” he lamented.

With no money and, therefore, no access to healthcare, Delia passed way leaving a teenage Hargraves to fend for himself. Sick of the alley and wooded steps, he searched for a better life. “Everyone takes the hunt for fortune,” wrote the author.

His adventures take him west, hitchhiking on trains and drifting as a farmer, escorting prostitutes, and rafting along the Ohio River. Eventually making his way to the west coast, he comes into a large sum of money.

With his fortune, he writes screenplays to be used in silent films. He gains notoriety and helps his friends financially. But, even with the admiration of Hollywood women, he longs for Frances Milton, the girl who came from brownstone steps.

Serendipitously, the two meet again. Through car rides and long walks, the two develop a bond that’s deeper than friendship. However, the smell of yellow soap haunts Hargraves. His poverty-stricken childhood dented his development, for he believed he needed to find a woman who matched him and his alley past. Frances was out of his league.

He loved Frances, but for Hargraves, poverty had become more than a financial situation. It had become a mindset. Even with a nice house and money, Hargraves’s feeling of inadequacy meant he could never measure up to the level of equality necessary to ask for Frances’ hand in marriage.

Only half a ticket

One crucial piece of information that Katharine Haviland Taylor relays to the reader is Hargraves’ father’s socioeconomic status. We don’t know who he was, but we know he was a “gentleman.”

During this time in American history, individuals born into the upper classes were expected to learn manners, dress in appropriate clothes, speak correctly, and display proper etiquette at all times.

Even with the work-echoing smell of yellow soap reminding her that she was poor, Delia expected that Hargraves grow into a gentleman.

One day, Hargraves gets into a fight at school. Delia’s North Star had been to raise her son like a gentleman and fighting was ungentlemanly. So, she scolded him. However, Taylor wrote that Delia thought to herself, “I wish’t he wasn’t a gent by rights, and then we could enjoy these here fights together.”

She believed the father’s gentility was hereditary. Her self-righteous neighbors talked of her son’s “shame” and “knowledge of his inferiority.” Listening to this, Delia chose not to answer. Not because she didn’t have an opinion, but because “there was no answering people of brown-stone steps.”

Furthermore, as she stood uncomfortable, swaying foot-to-foot, “wishing she could talk like a lady and that an education had made words able to come when she bid and to dance to her thoughts.”

The golden ticket of education

Sometimes, people ask me why I’m going for my doctorate. I have a tough time answering this question. Because I’m a nerd who loves school? Because my employer is gracious enough to reimburse my tuition? Because it makes me a more knowledgeable teacher?

All these are true. But, I like education simply because it has provided me with the art of language. You know what it feels like to be frustrated when words fail to rescue you. You have these feelings, but no way to communicate. While I have a long way to go, reading, writing, and researching has helped me to express myself – just like Delia wanted to.

For some, generational poverty can hold people back. It’s difficult to break a cycle. However, Taylor wanted her 1920s readers to know there is hope.

First, Delia sent her son to school. Learning to read served as the first step toward upward social mobility.

However, just like famed abolitionist Frederick Douglass, Hargraves mourned the freedom of his books. He could weave in and out of stories, experiencing an imagined life of faraway characters, but lacked the power to experience life himself.

Hargraves found this frustrating. “Why does she let me learn to read and see what other kinds of life are like, when I gotta live in an alley, and live like a hog?” he asked.

Eventually, Hargraves’ ability to read allowed him to follow his dreams of writing screenplays (what Taylor herself did as well). Plus, reading and education gives people something more to talk about than just the weather. As Eleanor Roosevelt said, “Great minds discuss ideas; average minds discuss events; small minds discuss people.” Books gave Hargraves deeper ideas that he could share with the rest of the world.

However, even with his money and library, Hargraves still could not muster up the courage to ask Frances to marry him. The smell of yellow soap and wooden steps acted as a fence, a barrier to reach toward his potential.

Transplanting himself from poverty to a middle-upper standard of living, his mental landscape kept him in the alley.

In the end, Frances must encourage Hargraves to let go of the past. “‘Think of those things, if you like,” Frances told Hargraves, “but don’t let them hurt you!”

The point of the book is that life is an echo-chamber. Calling it echo-theory, Taylor argues that the beliefs we have of ourselves project into the world. Then, those projections echo back to us, making those ideologies a reality. Hargraves let his humble beginnings restrict him from reaching toward his fullest potential.

Like a mirror, life reflects the confidence we hold in ourselves.

Delia hadn’t known of nature v. nurture. Taylor wrote, “Had Delia heard of ‘heredity’ and ‘environment’ she would, in all probability, have thought them the names of sleeping-cars, or of romantic isles, but she believed, all unknowingly, in the first, though the second had more to do with Theodore Hargraves Bradly’s making.”

In other words, it doesn’t matter about class.  Ethics, love, and character matter more. Coming from a working-class background myself – complete with an alley and wooden steps – the years have taught me that a good inheritance consists of a well-intentioned moral compass, not money.

Taylor ends the book with those quote: “Yellow soap is still a wall, but it is rose-grown, sheltering, and there are two behind it.”

If you want to find out if Frances and Hargraves’ relationship ends happily or as a tragedy, “Yellow Soap” is available on Google Books at no cost.

Who was Katharine Haviland Taylor?

Born in Minnesota in 1891, Taylor moved to York in 1906 because her father, the Rev. Arthur Russell Taylor, served as rector of St. John’s Episcopal Church. Dying in 1941, she lived most of her life in York and is buried at Saint Johns Episcopal Churchyard.

She wrote over twenty books including Barbara from Baltimore, Cecilia of The Pink Roses (her first book published in 1917 turned into a movie), and Back Roads. List of her other books HERE. She also wrote more than 1,500 articles, short stories, poems, serials, and one-act plays. Some of her short stories were turned into film. “Failure,” for example came out in 1933.

Other books used York as inspiration such as The 900 Block (based off East Market Street where she lived on the 1400 block) and The Boulevard (based off Elmwood Boulevard). Characters were all fictitious, so she said.

Jim McClure wrote about her award from American Association of University Women (AAUW) in 1984 and June Lloyd wrote about Katherine’s work as an artist.

June Lloyd’s in-depth story of Katharine can be found HERE.

1 comment on “The haunting smell of yellow soap: An author’s portrayal of poverty in 1900s York”