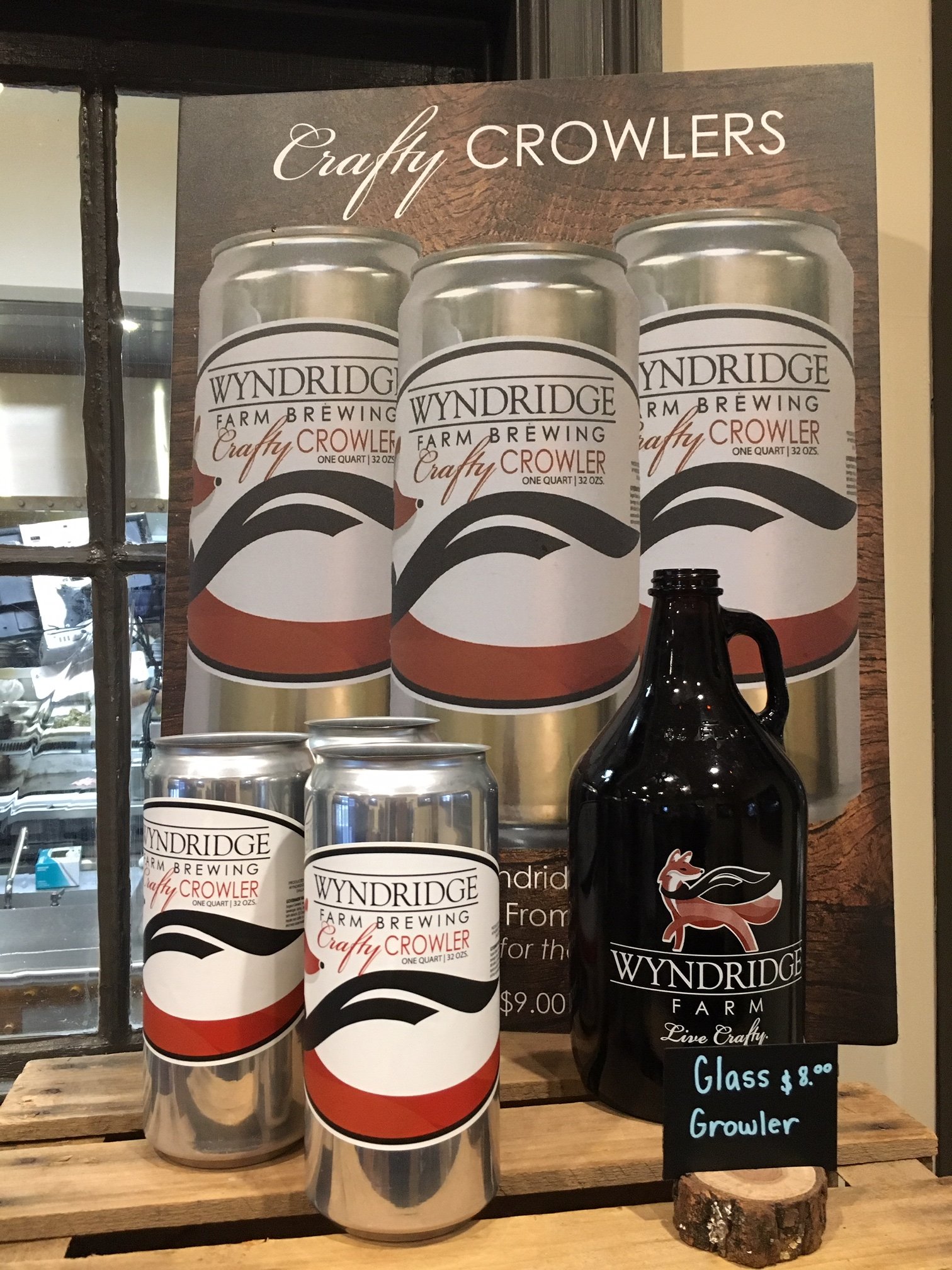 This is the second part of a story about Wyndridge Farm. Please check out the first part: How beer gets from the brewery to the bottle – a York County bottling history.

Bottles out, cans in

Today, more breweries are turning to canned products instead of glass bottles. Wyndridge Farm near Dallastown started canning their product a few years ago when it purchased one of York’s few canning lines.

During our interview, Taylor Groff, COO of Wyndridge, told me that the sunlight that seeps through a glass bottle can ruin a good drink. The quality and shelf-life of the alcohol deteriorate when the rays of light penetrate  the glass, even if the glass is dark-colored such as green or brown.

Cans, on the other hand, prohibit all light from depreciating the liquid. Additionally, cans are cheaper to transport. Groff said 60 cases of bottles will cost the same as 100 cases of cans because the cans are half the weight.

Yet, there is still a stigma that cans only house bad beer. Many people prefer bottles because they believe the taste to be superior. “Canning is a thing of the future,” Groff explains. “Some of the highest-quality beer in this country can be found in cans. In all reality, it’s better.”

Even growlers, a 64-ounce glass jugs, are changing to crowlers, large cans that hold 32 ounces of liquid. Growlers, the brown glass, will not keep out all the sunlight, and they only last a few days in the fridge because the beer loses its CO2 punch. Crowlers, on the other hand, last a month, can go on beaches and trails since it can’t break like glass, and are generally cheaper to produce, according to www.craftbeer.com. At this point, Wyndridge is selling more crowlers than growlers.

According to Growler Station, a supplier of growler stations for breweries, fresh beer used to be carted from the local tavern in a small, galvanized pail during the 1800s. Legend tells us the term “growler” started from the sound of escaped CO2 from the lid when beer sloshed around the bucket.

Not only does it can their own products, but Wyndridge cans beer, wine, and soda from about ten regional breweries. The canning process is quite interesting.

As Groff showed me around the canning line, sounds of hisses, spraying noises, ticks and clacks echoed around the large room. The smell of sweet wine drifted as we walked over hoses and around large tanks.

The canning process begins like this: A large truck, similar to a fuel truck, drives up to their facility with a tank full of beer, wine, or cider. Wyndridge pumps the fluid from the truck’s tank into their tank.

Empty cans are loaded off pallets from a depalletizer. All automated, the cans move onto an assembly line where a mechanized twist rinser rotate the cans so the opening is upright. It also blows air inside the can to

remove any dust particles. After being sprayed with CO2, alcohol is siphoned into the clean can.

Just like the crowler machine at the local breweries, the lid is placed on top of the can and it’s sealed with a seamer.

Have you ever wondered how clean a can is when you press your lips to take a swig of that cold drink? The answer is very clean. The can is rinsed before and after the process with a cleanser.

The label comes next. As the filled can shuffles through the assembly belt, an automatic labeler takes a single label from a round dispenser and secures the label to the can. However, not all cans require labels.

Wyndridge has their supplier already print their logo directly on the can. Printing the design right on the can costs the same as a blank can from Ardagh, their can supplier. However, there are fewer colors to choose from so its choices are limited.

Conversely, the sticker labels can be applied all year long and come in a multitude of colors.

After the can is complete, its are loaded on to a cardboard tray and an employee secures the six-pack plastic holders on the top of the lids.

Groff attributes the success of Wyndridge to their destination location. All at one locale, it can host weddings and corporate events, offer great food from the restaurant, and “fans” there enjoy their beer, wine and cider.

Taylor Groff didn’t start out in the family business. In 2008, we graduated high school together. I went to York College while Groff went to West Virginia University. In 2012, he graduated with a Bachelor’s degree in Agribusiness Management and Rural Development. His career started outside the company where he worked as a Sales Manager for two and a half years.

In November 2014, Groff’s mom and dad, Julie and Steve Groff, asked him to help grow the business as their Senior Vice President of Sales and Operations.

Gross spends a lot of time on “the farm” each week but doesn’t seem to mind the workload. “It’s one of those things that you’re always working whether you’re here or not. But, it’s really not a negative for me. It’s really not like working.” However, he says it’s not like a hobby either. “My family put everything into this. We must continue to keep growing.”

At age 28, Groff makes difficult decisions every day. Whether is dealing with a broken piece of machinery or looking at new marketing techniques, Groff says one of the toughest parts of his job is maintaining their growth, “If you’re not growing you’re dying,” he tells me.

Today, their cider dominates the majority of the business with Crafty Cider being their top seller. In 2019, it plans to have ten to twelve hard cider products on the market and about the same for beer.  Barn Dog Porter is their top selling beer.

Since it distributes to ten states, their large distribution footprint ensures more growth for the future. “I learned every step of the business in four years,”  Groff says. He started at the bottom because in order for the business to run smoothly, “You must understand all aspects of the business.”

In addition to a destination location, Groff thanks its employees for the business’ success. Its 110 employees “make this all happen,” Gross says. “Without the employees we wouldn’t be able to do all this.”

“Employees show up everyday and help us grow. We have great people in the right places.”

Groff also explains the most profitable way to sell a beer is by the glass, “Within one’s own establishment directly from the keg. Every time you do something with that liquid, the profit margins go down.” All the materials that go into canning cost money. Shipping a keg costs money. “For every case of beer, there’s 24 cans, 24 lids, four or six pack of the rings on there, and then a cardboard tray, and an expensive piece of machinery to do it all.”

With the “Craft beer industry crowded as hell,” trying to stay unique and innovative will be crucial to Wyndridge’s success. He says, “Having a business plan is crucial.”

Near the end of our interview, Groff lunged forward to pull a can off the assembly line. His keen eyes spotted a can that was not sealed properly. Luckily for me, he offered a to try it. My senses buzzed from the loud sound of pressurized hoses and dropping cans, the steam and heat from the tanks undergoing their cleaning, and now the smell and taste of a smooth wine.