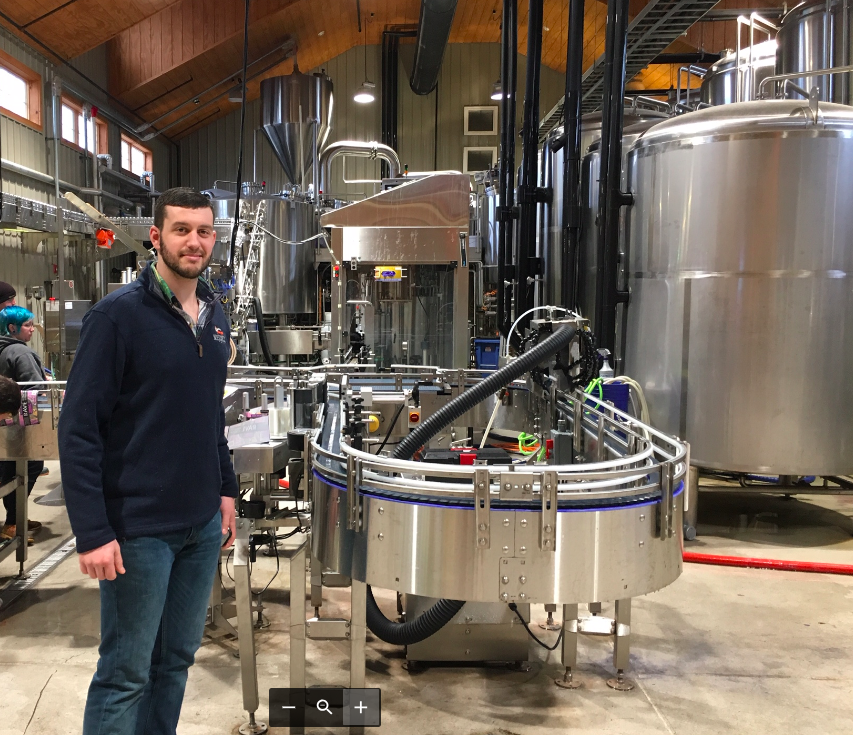 When I asked COO Taylor Groff why Wyndridge Farms picked a fox as its iconic brand, he told me, “It’s a York County thing.”

Just like on my farm in Seven Valleys, the land where Wyndridge is located provides the habitat for many wildlife animals such as turkeys, squirrels, deer, and foxes.

On its website, Wyndridge further explains why it picked a fox: “The fox is known as an elegant, sly and crafty animal, one that visits the farm frequently for a little ‘fun.’ This essence captures the spirit that is Wyndridge Farm.”

Origin stories commonly told about restaurants and breweries go something like this: “They started out small… .” However, Wyndridge’s foundation started with an extreme difference. Instead of slow growth, the business laid the framework for massive growth, very fast.

During our interview, Groff explained that one of the toughest aspects of the brewing industry is growing. Oftentimes, people start with small breweries and build their company as their clientele grows. However, the “scale up” process can be difficult because companies find it’s land locked and frequently run out of product.

Wyndridge’s bottling and canning operation can bottle 12 and 22 ounce bottles as well as 12 and 16 ounce cans. Additionally, the facility has the ability to process 1,000 to 2,000 cases a day, and its impressive canning line is equipped to pump out 100 cans a minute.

Our conversation prompted me to look up the history of bottling in our area.

According to Bottles & Jugs, with a York, Pennsylvania Perspective by Fred Rosenmiller and edited by Don Hartman:

York’s first bottler was C. Pfahler. He used all dark green bottles and had iron pontil marks. A pontil, or punt mark, is a scar where the punt was broken from a work of blown glass. This proves that the bottles were blown freehand because bottles without this mark mean it was mold-blown.

A different company, the Eagle Bottling Works, owned by Casper Loucks, manufactured pop as well as bottling beer. However, it went out of business in 1901.

Another bottling site was the National Bottling Works, created under George William Kiehl in 1892. However, the name is misleading — the company never went national. However, like Dominos, it did deliver.

During two years of its operation from 1900 to 1902, owned by  John J. Boll at this time, the company advertised “private beer delivery” where it would transport beer to private residences, incognito. The wagon would be “unlettered … nothing about the wagon, horse, harness or driver to indicate that beer is being delivered.” However, the delivery of beer couldn’t have been too successful, since all records of the company ceased after 1902.

Andrew Lawrence was another bottler but little is known about him.

Upp, a fifth bottler, was best known for York’s “pop” bottles. They are pontiled, green, squat and blob-top shaped in cobalt blue and sometimes aqua. As Rosenmiller and Hartman wrote in their book, this bottle would be “the crowning jewel in the collection of anyone fortunate enough to attain one.”

During their research, Hartman and Rosenmiller found thirty or more different names of beer and soda bottles all dating from 1850-1920 in York. However, these operations came and went so quickly that only twelve probably operated at the same time.

Rosenmiller donated several hundred bottles from his valuable collection to the York County History Center. It took him years of researching and digging through outhouse pits to build his bottle collection.

Teresa Boeckel, from the York Daily Record, interviewed Rosenmiller several years ago. One of his favorite bottles was from George Upp Jr.’s company, a cobalt blue ten-pin from the 1860s. He told the YDR, “I’ve enjoyed the collecting process and (would) hate to see it dispersed all over again and particularly get out of the area.”

Some of the bottles produced in York were even found in Harpers Ferry.

Deborah A. Hull-Walski and Frank L. Walski conducted research on the history of bottling in Harpers Ferry. Their article,  “There’s Trouble a-Brewin’: The Brewing and Bottling Industries at Harpers Ferry, West Virginia,” explains the bottling process from the 1800s.

The Industrial Revolution brought mechanization and mass production to companies. In 1895, the Harpers Ferry Brewing Company sold its first beer, a lager, with a semi-automatic bottling system. However, even with the modern equipment, many elements of the bottling process were done by hand such as the washing and drying of the bottles.

In the 1870s, many bottlers still owned the bottle even after they sold it. How did this work? After the invention of the Hutchinson stopper, people returned the bottles to the owners for a refill. So, when beer was sold to consumers, the price of the bottle was not included in the sale of the beer. For example, during the early 1900s, a soda cost 5 cents but the bottle would have added an additional 2 and a half cents.

A company could sell more soda if it only charged for the price of the drink, not the bottle it came in. However, people frequently did not return the bottles, throwing them into pits and privies much to the merriment of collectors down the road.

Unfortunately, many people were hurt on the job. For the men and boys who worked there, pressurized glass bottles sealed by hands led to frequent accidents. Additionally, the Harpers Ferry book points out that the brewery in Harpers Ferry had a “free beer” system, common for the time period, which lead to “cases of drunkenness” and more accidents.

Even though the brewery in Harpers Ferry proved unsuccessful, other companies, including Coca-Cola, utilized bottling to their advantage.

Coca-Cola owes some of its success to bottling

Coca-Cola, according to the history page on its website, wouldn’t have developed into a worldwide product if it hadn’t bottled soda. In 1894, Joseph A. Biedenharn, a candy store owner in Vicksburg, Mississippi, sold Coca-Cola from a soda fountain.

However, he soon realized that if he bottled the soda, he could sell more of it. So, he used a Hutchinson, a common glass bottle type, and urged the owner of Coca-Cola at the time, Asa Griggs Candler, to start bottling his soda. Candler declined — fountain sales sold enough soda at the time and bottling would be a whole new level of business operation. It would take five years for Candler to change his mind.

The first bottling agreement for Coca-Cola came in 1899 when Benjamin F. Thomas and Joseph  B. Whitehead, two attorneys from Tennessee, bought exclusive rights to bottle the soda. In consideration of Biedenharn, they avoided selling the bottled drink in Vicksburg. Within ten years, Coca-Cola would have 400 bottling plants operating across the nation.

However, Bob Hoffman, weight lifter and founder of York Barbell Company, advocated for water out of bottles advocated for bottled water instead of soda.

After this interview, in my mind, the York County fox has mutated from a vicious predator trying to snack on my chickens to a delicious treat to enjoy on these cold, winter days.

Look for Part II of this story: “Wyndridge breaks long-time York tradition by canning cider instead of bottling.”