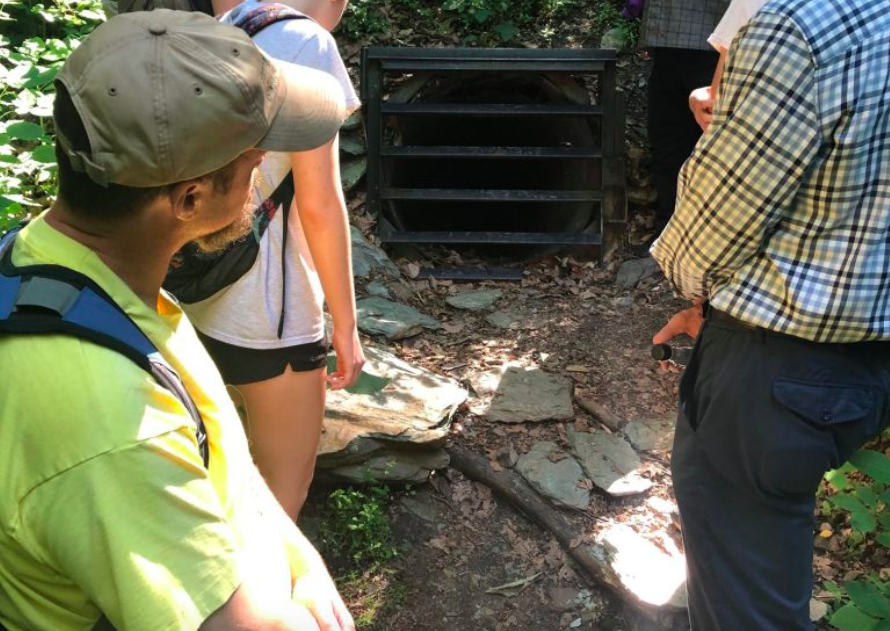 “See those sparklies on the ground?” Jeri Jones inquires. “That’s magnetite,” he says.

It’s a mineral attracted to magnets and one of the main iron ores.

We’re walking through P. Joseph Raab Park, located near Seven Valleys. Jones, a geologist and archeologist who worked for the county parks department, takes us back in time as we learn about mining in the area.

At one point, Raab park was home to one of 170 iron ore mines in York County. Seeing the reflective mineral shining from the dirt reminds me that this area Seven Valleys used to be bustling with industry.

As we trek down the hillsides, we hear leaves shiver as the wind rips through the trees. Since it’s June, I smell the intoxicating odor of ripe honeysuckle vines. Two of my favorite things are being outside and history, and as one of the best preserved mines in York County, the 72 acre park offers both.

While the park may offer serenity today, at one point the area was a bustling digging site. “Picture this as a field, not a forest,” says Jeri Jones.

The York Iron Company mined high quality iron ore called “Codorus Ore” from the area between 1854 and 1888. According to the Second Geological Survey of Pennsylvania from 1874, 12 to 25 miners worked there, depending on the demand for ore. Each day, they carved out 10-20 tons of rock.

People who grew up nearby described loud sounds coming from the mine. Black powder exploded inside the hillside. Locomotives shrieked and chugged away tons of material. Shovels and picks hammered against Earth’s foundation, breaking away chunks of rock that took thousands of years to form.

I try to imagine all this activity while listening to the silence of the woods. We were there to enjoy nature, but a 150 years ago men saw the profit and exploitability of a valuable resource beneath those trees.

Moving to our next site, Jones’ eyes hunt for something on the forest floor.  Soon, he finds his quarry – a hidden, steel rail. Before the railroads, mules hauled the iron core out by pulling carts. I pictured the glorious mine cart scene in Indiana Jones and the Temple of Doom.

Before mechanization, mules served as beasts of burden. Winding through subterranean labyrinths, the animals pulled carts through the darkness. While the mines at Raab Park only go back a few hundred feet, mules in the anthracite coal region of Pennsylvania traversed miles of criss-crossing passageways.

Luckily for the workers, mules were notorious for their memory of the treacherous trails.  I’m sure the mules functioned as companion animals, too, safeguarding the miners with their strength, awareness, and wherewithal. Sometimes, however, mischievous mules would outsmart the driver, running away with carts or bucking the reins. Soon, the invention of electrified mine cars would replace the mules.

When our group reached the back of the old mine, we turned out our lights. Due to light pollution and the stars, we rarely find ourselves in complete darkness – darker than when you close your eyes at night. As someone who lives for the sun, I try to imagine working in the blackness with only crude light sources.

Lewis Hine, a teacher from New York City, photographed children working in Pennsylvania mines during the early twentieth century. I use these powerful images in the classroom with my high school students to build empathy for those who came before us. Historians are unsure if any children worked in mines at Raab Park, but I picture the workers’ dilated pupils as they hammer dangerously into the rock-bed.

The cave is a perpetually comfortable 55 degrees. In the winter, the warmer air thaws the snow. But when we were there in June, the cooler temperatures offered a respite from the summer heat.

We got so quiet that I could hear my heartbeat. Again, I think about the work of the miners. In my cut-off blue jean shorts and breathable cotton shirt, I visualize what it must have been like drenched in sweat and filthy with black grime.

Even with the hardships we’re going through right now,  it’s important to remember history. Thinking back to the laissez-faire labor laws, I’m so appreciative of our societal expectation for worker safety, child welfare, and animal rights.

How did the mine become a park?

By the turn of the century, mining efforts ceased. Farmers claimed the land, planting crops and grain. Again, the land underwent a transition. Instead of blasts and digging, the earth was tilled, planted, tilled, did you mean tilled twice? and harvested. Even though plants began to cover the scars of the mine, seven acres were used as landfill.

Fast forward to the 1980s when a company from Philadelphia wanted to use the area for a low-level chemical waste dump. Passionate locals, however, prevented this from happening by forming a protest organization called OUCH.

Along with Mike Fenton, Jones worked to nominate the site for the National Register of Historic Sites in 1984. About three years later, a waste management company called Modern Landfill and Recycling purchased the land. The company eventually donated the park in 1993, after removing most of the trash. If you go, you’ll still see evidence of an old dump site.

The transition from dump to park wasn’t easy, monitoring the test wells for three years to make sure the groundwater was safe. By the early 1990s, the York County Commissioners reached out to Jones for a tour of the property. Just like me, they were enthralled with the natural beauty and history, ultimately leading to the Board’s approval of the mine’s addition to the park system.

After learning the history of the park, I can see more deeply. I’m not talking about the literal landscape, but the historical layers of our past. Peel away modernity’s blanket, and you can see the railroad, the mules, the workers. Go to the caves. Feel the cool air on your shins. Peer inside. Picture the miners hard at work. Hear the explosions and smell the soot. That is what historical knowledge and imagination can do: excavate sights, sounds, and feelings that make you feel alive.

The park is open daily from dawn to dusk to the public.

Read more about the mine at P. Joseph Raab Park HERE and HERE. 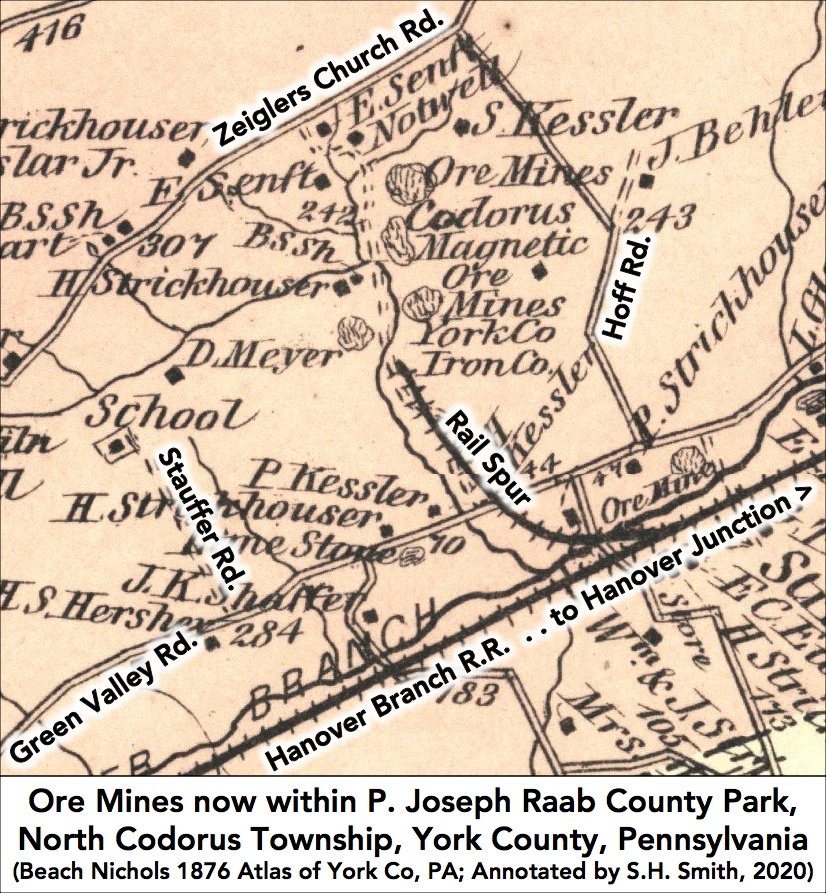