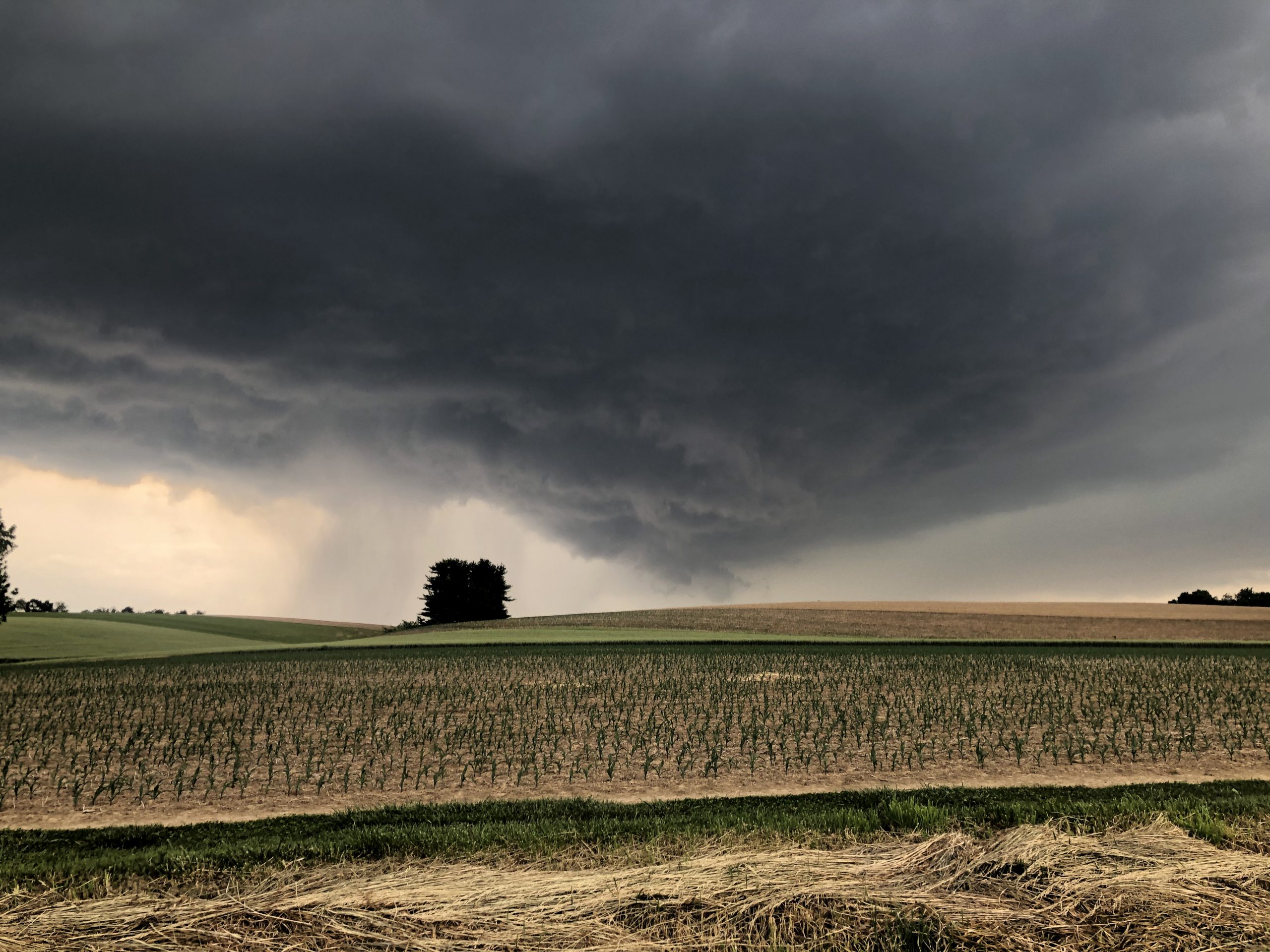 We watched safely under a barn roof as a fierce thunderstorm took its time raining down on my graduation party. Samone Maddox Photo.
Posted by Jamie NoerpelJune 5, 2020 Wandering in York CountyNo Comments

Witnessing the awesomeness of Mother Nature in Seven Valleys, though she drenched my graduation party

This week, we huddled under the roof of my horse barn as we witnessed a spectacle of nature. I had invited four of my closest friends over to celebrate the completion of my doctoral defense. The plan was to chat around a fire, sipping on my dandelion mead and enjoying the company of the ones I hold dear.

As 7 p.m. approached, we realized a thunderstorm was imminent as dark, swirling clouds ascended over the hillside near Seven Valleys. Racing to the protective roof of the horse barn, we stood tight to the wall as the wind ripped across our faces. The rain came down in sheets as lighting shot across the sky. Hail began to bounce off the ground and the brave few ran out to grab the largest ones.

It was beautiful. We watched in awe at the wonders coming from the sky. Each flash of lightning, crack of thunder, or gust of wind excited us, making us feel more alive. Gathered together on the hilltop was not the plan. But as my friend Jason said, observing the power of nature in action was well worth the price of a canceled fire.

The meteoric excitement of 1899

One of the reasons we enjoyed the event so much is because we knew we were largely safe (barring a lighting strike). Of course, people didn’t always understand earth and space science.

In 1899, a meteor shower rocked America’s psyche. The earth plunged through the great ring of Leonid meteors. This occurs annually, but this year was special because a comet accompanied them, making the sky extra bright with illuminated trails of dust rubble.

At this time, scientists could explain what was happening. Because the general public didn’t have access to the scientific literature, they didn’t understand it, or they didn’t care, people got emotional.

In a New England town, people thought the world was coming to an end. Thrown into consternation, they didn’t go to work because, I mean, would you go to work if you thought you were going to die?

It’s understandable that people reacted out of emotion when they read texts such as in this periodical by Walter George Bell. Titled “The Great Meteor Shower of 1899,” Bell wrote, “This year we expect the approach of the swarm itself, a vast precession of myriads upon myriads of flying stones, and if we are fortunate our earth, carrying all its inhabitants, will plunge headlong into the midst of it.” Even though Bell instructed people to not be alarmed, if I read words such as “swarms” and “flying stones,” I would be scared, too.

Some stopped working all together, pleading with God to protect the earth from catching on fire.

Stories about the end of the world have existed for a long time – since the beginning of recorded history, says apocalypse scholar Daniel Wojcik. Think back to Noah and the Flood. Other cultures such as Norse myth of Ragnarök, Hindu, Mayan, African, and Greek belief systems similarly describe the end of the world as we know it.

At the time of the 1899 meteor shower, many believed the light show represented the second coming of Jesus – a spiritual cleansing of the unfaithful. Today, fears of an apocalypse are more connected with nuclear fallouts, biological weapons, or other man-made threats.

Wojcik says apocalypse beliefs reflect the cultural milieu of the time. New technologies and crises impact these narratives as response to the current climate. Ronald Reagan, for example, allowed his interest in biblical prophecies to influence his beliefs on foreign policy. Even though many react to their apocalyptic beliefs out of fear, planning and talking about it alleviates fears by cultivating a sense of preparedness.

The same year as the 1899 meteoric event, a visiting teacher named Miss Edmund taught at the York Collegiate Institute. In November, she stressed to a crowd about the importance of studying nature. She urged teachers to take their students to the countryside. These excursions would reveal the beauties of nature, she said, by dispelling away with ignorance.

Referencing the panic over the meteoric excitement in New England, she felt that teaching York County children about meteors and other science would prevent unnecessary alarm and fear. Just like the light and water show last night, I enjoyed Mother Earth’s performance because I knew that I was safe. Miss Edmund hoped for the same thing when she implored Yorkers to use our natural world to educate.

At this time, women were not heavily involved in science. It doesn’t mean women weren’t experimenting and studying at all, they just weren’t as represented as men. For instance, the Yale Graduate School for Arts and Sciences gave its first Ph.D. to the first class of women just five years prior in 1894. It took 30 years after Yale awarded the nation’s first Ph.D. for women to be admitted.

Again in 1899, The Gazette ran an article from the Boston Herald titled “Women’s Education.” The journalist wrote, “There is no sex in science,” meaning both men and women should be able to study it. “Knowledge is neither masculine nor feminine,” the writer continued. I think this is why I love earth and space science so much. When I am in my garden or watching a storm, there are no cultural biases.

Others could say my graduation party was “ruined” from the rain. But I welcome anytime I can sit with my closest friends, as we witness the amazing power of our earth.

Going to the Nixon Park  or Lancaster’s North Museum of Nature and Science could teach you something you didn’t know about earth and space science, giving you greater understanding. The more we know, the less we fear.

The next period of Leonid activity will be Nov. 6-30. For a list of this year’s meteor showers, go HERE.