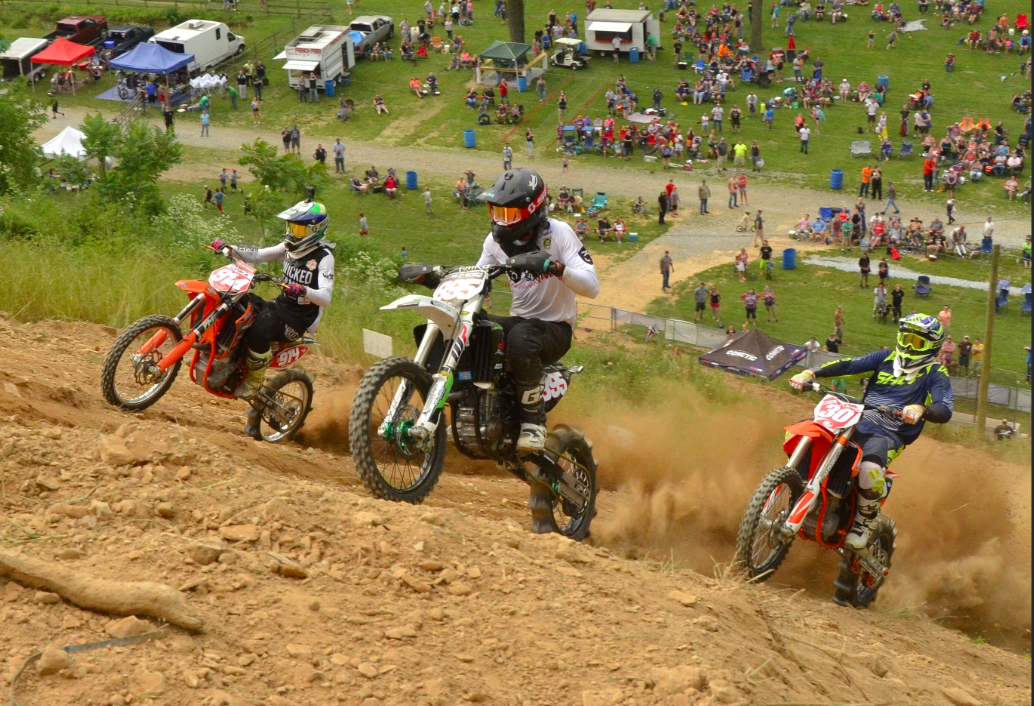 Sitting at the base of the Jefferson Hill Climb, I people watch.

Leather vests, tattoo sleeves, gray ponytails stroll beside me. Ripped American flag tank tops, suspenders, and straw hats walk past. Kids throw a football, stopping only when it hits the passerby or when the motorcyclist begins his ten-second ascent.

Toddlers with ear protection scoot on their tiny bicycles. I even see a woman knitting while sipping from a Miller Lite can. Sounds of engines reverberate through the valley as the smell of fish sandwiches drink past my nose.

What attracts the audience to this event? The excitement of watching a guy or gal on two wheels, swerve back-and-forth, spraying dirt and rocks as they spin to the climax of the 300–foot hill.

Each rider only gets two chances to get up the hill as fast as they can. Some make it, some don’t.

York’s known for many things: the York Fair, the Articles of Confederation, and our rich agricultural and industrial history.

Starting in the 1950s, York’s reputation added another unique (unique is one of a kind and surely other communities do this) rare feature – hill climbing.

In 1952, the first motorcycle hill climb club started near Stoverstown, some tell me. However, others point out that the first event took place in Glen Rock on Claude Rohrbaugh’s farm. As the bikes got bigger and riders more experienced, Yorkers begged for a larger and more challenging hill.

Four years later, the Hill Climbs moved to its current location in Jefferson. The White Rose Motorcycle club started in the white shanty. Today, however, the club has grown to 140 members who maintain all 175 acres.

To fund their club, the members pay $250 a year or work 50 hours a week. Considering a membership used to cost only $12, I appreciated the club’s consideration of members who would rather contribute labor, adding to the community, instead of simply writing a check.

This weekend, the motorists will climb the hill at night

On September 21, the White Rose Motorcycle Club will host its biannual Hill Climb. This time something’s new – riders will trek under the lights. Together, 85 volunteers will “make it happen,” the man in charge, Sam Keiser, told me.

Keiser, now retired, owned an automotive shop for 40 years. Riding over 10,000 miles a year on his motorcycle, he thrives on the feeling of “two wheels down the road.” Since he loves history, especially local and Pennsylvania history, Keiser takes to his bike for vacations because “there’s so much to see in the state of PA, especially on a motorcycle.”

Last year, the club lost $14,000 due to low numbers and flooding. In fact, Keiser tells me they blame the meteorologists the most. If the forecast the night before a ride says rain, Keiser says, 25 percent of people stay home. They lose another 25 percent if the morning brings drizzle.

But, they’re hoping the Saturday night climb will bring people back to the climbs.

Keiser will be able to tell if the Saturday night is a good turn out based on fish sandwiches sales. Yes, fish.

On these days, up to 4,000 people attend. However, the June 2019 climb only saw about 2,000 people due to a threat of thunderstorms. But that didn’t keep me and my friends from attending. The rain also didn’t keep away families such as Chris Baker and his daughter.

Chris Baker brings his daughter to the climbs, hoping to instill in her a love of the sport.

About twenty years ago, the club cracked down on the “party atmosphere” in an attempt to make the Hill Climbs safer and therefore more family friendly.

With their six-pack per person and small cooler limit, kids run around safely. Like a village, the audience keeps an eye on the kids as they play football and ride their own bikes. Just like the adults, the kids cheer on their favorite racers to see who can earn “King of the Hill” status like Beese Wendt used to do. Wendt’s long-time career as a hill climber (he raced into his sixties) led to his appearance on the June 2019 Jefferson Hill Climb t-shirt.

Jim Berkheimer from Spring Grove likes the Hill Climbs because “there’s nothing else like it in York!” Spending his time behind the scenes, Berkheimer mows, orders food, and runs equipment.

Getting out in the country, taking care of the club motivates him to keep coming back. Plus, as he pointed out, people watchers get to see all walks of life having fun together, enjoying a beautiful fall evening.

It will be September 21st starting at 6:30 p.m. I recommend getting there early to get the best seats. Only pack a six-pack of beer per person, no glass and no hard alcohol. Coolers are limited to 16×16 inches. Bring a blanket or chair and maybe a flashlight!

The Hill Climbs aren’t televised yet, so make sure you come out to see the racers.

Nothing beats being there, on the ground, looking up as Yorkers continue what Jim McClure called their “love affair with their wheels.”