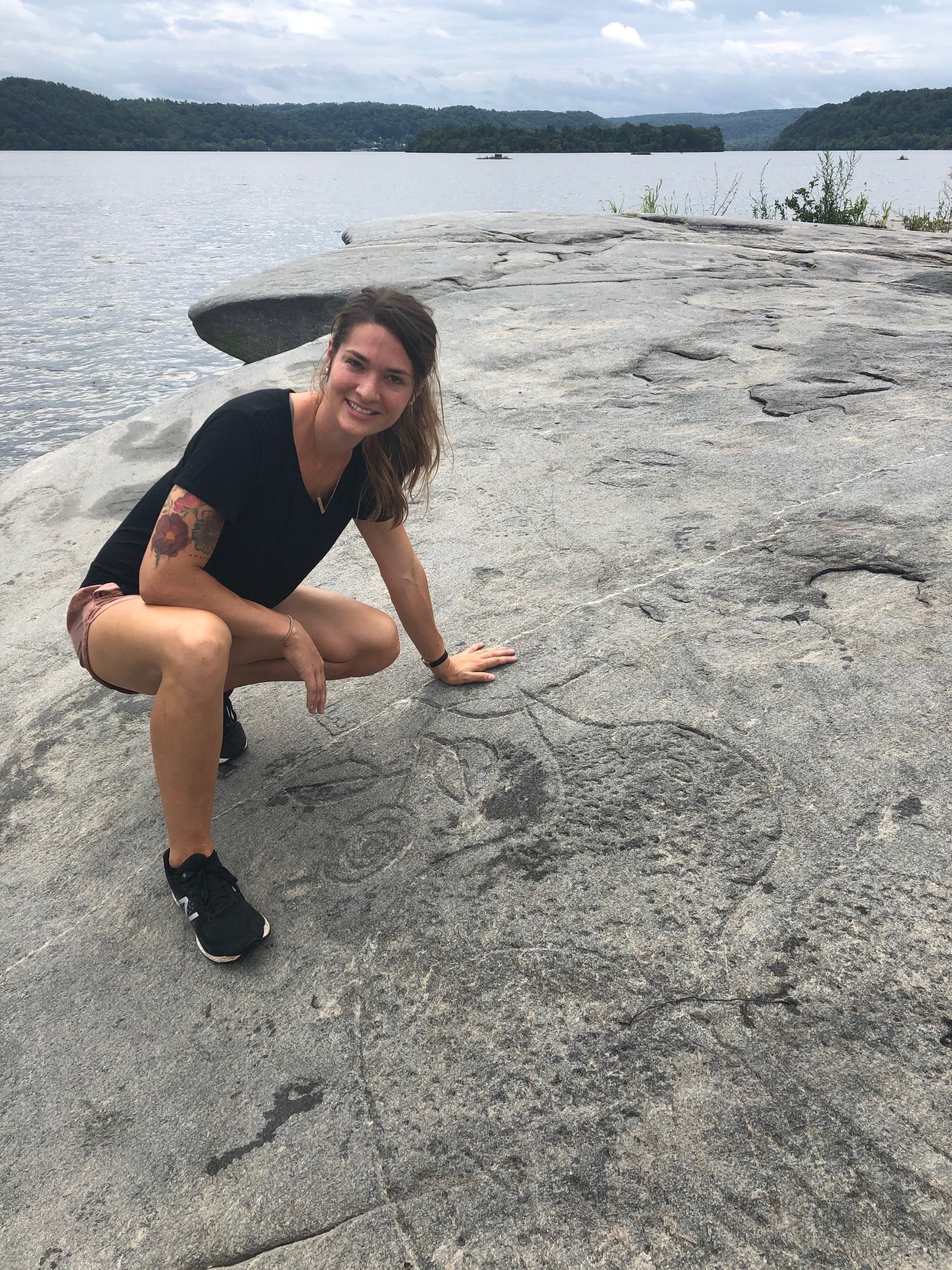 Time traveling on the Susquehanna River: My paddle board adventure to find Native American petroglyphs

If I could have a superpower, it would be time travel.

Picturing a time and place, I would catapult into the moment in history (or the future) that I envisioned. However, I wouldn’t want to interact with the scene. Instead, I would observe imperceptibly like Ebenezer Scrooge in A Christmas Carol.

Nothing in my wandering has come as close to time travel as my recent trip to the petroglyphs – Native American rock carvings – in the Susquehanna River.

Our pilgrimage to the Native American petroglyphs

Finding the rocks wasn’t easy. The only way to locate them is by water. My friend and I park near Safe Harbor dam where fishermen usually go. Since I have inflatable paddle boards, we pump one up and carry it down the steps to the river. Considering how we almost drop my $350 paddle boards down the embankment, I do not recommend this strategy. When we go again, I will launch from the Conestoga River Park in Lancaster County – a much safer route.

My confidence only diminished more when a fisherman said, “You’re brave,” pointing to our paddle boards. “Most people take kayaks,” he said. Even after exchanging worrisome glances, my friend and I decide to go on, fastening our life jackets a little tighter.

We direct our board away from the dam and begin paddling. Call me lazy, but I prefer to sit on my paddle board with my legs crossed. Water crests over the rim, dampening my shorts. By the time we get a half mile downstream, my traps and shoulders ache with the repetitive pulling motion.

At first, I’m disappointed. Where are the carvings? This is supposed to be the largest concentration of petroglyphs in the state.

About a half mile downstream, we scrutinize each rock. Considering there are 1,000 rock carvings at 10 different rock locations, we should be stumbling on them. Little did we know that many of the rocks were removed in the 1930s for preservation, and many more are  covered by water and soil.

Using a map on my phone (yes, I chanced holding my expensive, hand-held computer), we pinpoint Big Indian Rock. Once there, we carefully transfer our body weight to the gray stone and lift our paddle board onto the rock. The last thing I want is for our raft to drift away.

My legs tingle from falling asleep during our quest. But it doesn’t take long for me to forget my discomfort. “There! Look!” I point to the large bird carving. I see dates, initial, and names. I’m surprised at the amount of non-Native American images. Apparently, many of the imprints came from more recent travelers.

After dipping my friend’s t-shirt in the water, we wash water over the engravings. This makes it easier to see them. Unfortunately, the sun isn’t helping us. It’s overcast so the absence of sun and shadows makes it difficult to see. Next time, we’ll come at sunrise on a sunny day.

The reality of our finding comes to life. I see animal tracks, birds, and snakes. A thunderbird stands out. Wow, I think. This is about as close to time travel as I’ve been yet.

What do the carvings mean?

When compared to the more naturalistic designs of the other 40 Native American petroglyph sites in Pennsylvania, these designs are abstract. Some have called them “prehistoric graffiti.” But as others have pointed out, the effort and time needed to engrave such elaborate designs took intentionality.

Some other interpretations of their purpose include designating hunting grounds, accounts of their people, or the marking of sacred site. Out of seven snake symbols, six point to the sunrise or sunset during solstices and equinoxes, indicating astronomical significance. Round holes could reference stars and constellations.

However, the most probable theory asserts that the petroglyphs were boundary markers.

Local history educator Bart Stump and others have called them “teaching rocks,” places where older generations passed values down to their youth. I think about my high school students and how much they would love a field trip out here. I can’t think of a better way to excite my kids about history than to take them to this extraordinary site.

Regardless of my hypothesis, the petroglyphs remain one of history’s mysteries. Even though I’m a curious person, I appreciate this unsolvable puzzle. I find comfort in the ambiguity. As much as we love absolutes, our world isn’t set in stone. Luckily, however, the petroglyphs are set in stone and waiting for you to find them.

Who carved these images?

I tried to picture the artist. Was it a woman? How old was she or he? Did the artist have long hair?

It’s impossible to date the rock carvings because the rise and fall of the river means water tears at the rocks, removing microscopic pieces each time.  However, many believe the Algonquian Indians etched them about 1,000 ago.

Looking along the banks of the Susquehanna River, I envision groups of people along the bank. Some are tending to the garden – a medley of squash, beans, and maize beds. Over to the right are people chiseling spearheads and arrowheads in order to kill wild game. I imagine a family, with kids grabbing at grandma to lift them up. Their outstretched hands pleading for attention.

My mind wonders to Safe Harbor dam’s siren. If it rang, rushing water would strand us on the island. The spell breaks. The Native Americans are no longer here and all that’s left are these carvings – tiny peeks into the incredibly important lives of Native Americans.

Often, we talk about what Native Americans ate, built, or created, but we fail to conceptualize them as people. But I think it’s important to think of them as human beings with fears, wants, and desires.

Unfortunately, local Native Americans dispersed dispersed around during the 1700s thanks to European colonization.

Afterward, I regret standing on the rocks. Not only because poison ivy growing in the crevasses of the rock threatened my skin, but I later read how walking can damage them. I felt like an ignorant fool. With such a precious gift from the past, comes a lot of responsibility. Next time, I’ll take only photographs, leaving them as they are. (I read one person’s recommendation to not even apply water with a sponge due to unnecessary erosion).

Even though I’ll never be able to actually travel back in time, I felt connected to history more than ever that day. I knew little about the people who lived there before me, but I felt bonded to them.

When someone asked Bill Gates what superpower he wanted, he wished he could read super fast. Like Bill Gates, I wish I could read faster. But sometimes, we need to put down the books and see things for ourselves. Just like my favorite movie character of all time, I want to be like Indiana Jones – learned but also up for an adventure. Before cold weather hits, make time to go on a petroglyph adventure so you can see them for yourself.

If you’re not interested in getting on the water, here are some other places you can see petroglyphs:

Here are the best 8 locations of Petroglyphs to see in the United States, collected by the Smithsonian.

Special thanks to John Naylor for help finding the rocks!

6 comments on “Time traveling on the Susquehanna River: My paddle board adventure to find Native American petroglyphs”