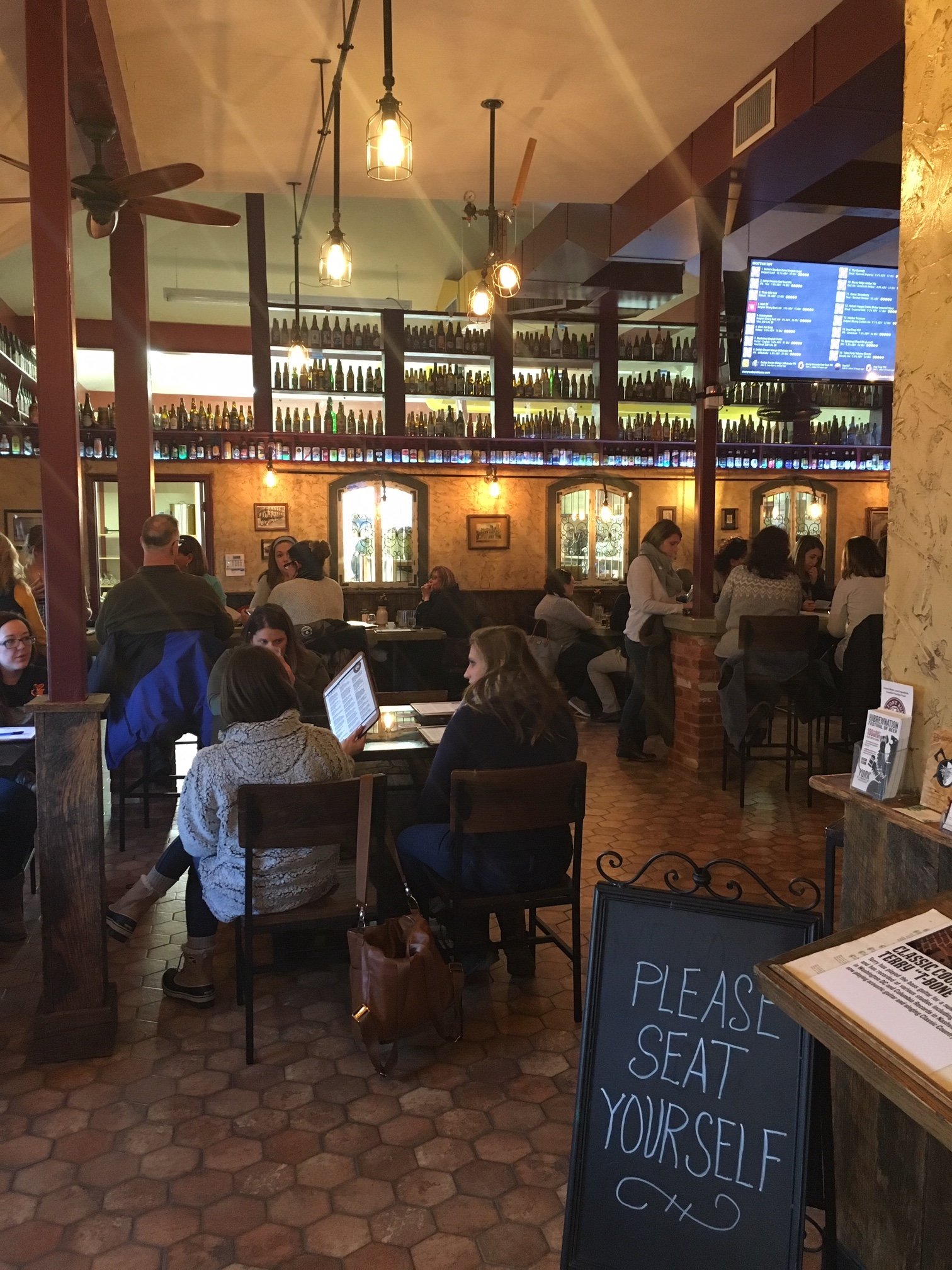 Opening just five months ago, the brew house has a full dinner menu and about a dozen hand-crafted and house-made beers. I recommend the York City Pretzel Bites and Vegetable Spring Rolls paired with Emily’s dream Mango Milkshake IPA.

Owners Tim March, his son Tim March II and Bob Elmiger along with 12 employees operate the brewery located at 3605 E Market St., York. During a visit to the brewery, March told me, “We did everything ourselves.”

Up until June, the trio had other full-time jobs. March was a logistics manager for a construction company, March II was an operations manager for ES3’s automation and robotics department and AAA Southern PA, and Elmiger first got into the brew business when he opened Bailee’s Homebrew and Wine Supplies, located right next door to the brewery.

With their construction skills, the trio laid the tile, crafted the bars, and decorated the restaurant/brewery to resemble the “old world.” The plans started 2.5 years ago to build with a European-style, German-influenced interior design. “The Concept is the old monks,” March told me. “In order to make money for the monasteries, they would make beer and when travelers would come by, they would sell them beer, food, and safe lodgings, of course with a religious connotation. A little bit of ‘Jesus at the well.’”

Bob Elmiger has an interesting life story. He worked construction for over 42 years and played international-level rugby until the age of 64. Caring for the adult education, he taught people who have been underprivileged such as prisoners and non-traditional students in Baltimore City trade skills. To add another layer, Elmiger is an ordained minister.

While March operates as the lead brewer, March II performs the business operations while Elmiger functions as the general manager.

March home brewed beer for quite a few years. His eight years of experience encapsulated all his passions: chemistry, flavors, and getting to drink his experiment.

Stony Run tries to locally source its products and its been quite successful. Most items come from the region including grain from Deer Creek Malthouse in PA and hops from Carlisle and Ritz Hop Yard in Hellam.

Building a community of beer-lovers

With the rise of local, hand-crafted beers, I had to ask, “Tim, is there enough demand in York County to support all these local breweries?” March replied with a secure, “Yes, it’s not a fad. The local breweries feed off one another. We’re all a part of this brewing trend that’s here to stay.”

What attracts patrons to Stony Run is its location. “We’re off the beaten path,” March told me. “Some people may not want to go downtown. People have been waiting for something like this to open up between York and Lancaster.” Due to its immense success since it opened in 2018, the brewery is looking for a satellite location in York’s downtown; however, its only in the investigative stages.

I’ve done a few blog posts of breweries, and I always wonder about the community of brewing. When I asked March about the local relationships, he said, “It’s absolutely like a brotherhood. We’ve had so much help from other brewers such as getting started, asking questions. It’s a friendly community, we’re like comrades.”

Elmiger said, “It’s not a competition. It’s not about winning. It’s about building relationships and becoming friends with other breweries.”

This friendly attitude was laced throughout my entire visit to the brewery. As a researcher/blogger/journalist, sometimes people are hesitant to allow me into their lives, understandably. However, March and Elmiger were extremely warm and welcoming. And, this treatment was not unique to me. I watched as they greeted customers, chatted with people at the bar, and constantly checked on customers.

Now, I could be a little biased because, as my friends know, the animal-lover in me could have fallen in love with Bailee, the affectionate golden lab who accompanies Elmiger to work everyday.

Stony Run Brew House has 14 beers on tap in addition to two guest taps. March matches the style of the beer with a name that reflects York. “The names just come to me,” said March. He went to the York County History Center’s archives to get as many historical facts as he could from the 1700s, 1800s, and 1900s and applies them to his beers.

Here are a list of some of its beers:

Camp Security Redcoat IPA – Named after an American Revolutionary War Prison Camp in York from 1781. March felt his intentionally, British-flavored red IPA reflects the stockade and living quarters built on a local farm where British privates and noncommissioned officers were held. Camp Security was abandoned in 1783 when the war ended.

Three Mile Run Kolsch Style Ale – Named after a waterway crossing in Springettsbury Township under East Market Street, Northern Way, and Eastern Boulevard. The Three Mile Run got its name due to its distance – three miles –  from this point to the square in York as well as a neighboring inn called Three Mile House.

Slow & Easy Belgian Wheat Ale – In the late 1800s, log lumber rafts floated down the Susquehanna River to meet sawmills in York and Lancaster county river towns. On its tap list, Stony Run says, “Almost every rock and projection along the way had a name familiar to the raftsman: Slow and Easy was one of them. After a long day, remember to take it ‘slow and easy.’”

Hidden Treasure Belgian Golden Strong Ale – In 1778, James Rankin, a Yorker, is said to have buried a large amount of gold and silver on his Springettsbury Township property. Remaining a British loyalist during the Revolutionary War, he was arrested and jailed in Yorktown as a “traitor.” After escaping from jail, he fled to England and his buried treasure was never found.

Even Stony Run Brew House got its name from the York landscape. Stony Run, a creek, originates up at Rocky Ridge Park. And, the Rocky Ridge Amber Ale happens to be March’s favorite beer on tap – an amber ale with a malty caramel flavor.

To the owners of Stony Run Brew House, supporting the community is important. Elmiger told me that the brewery “sort of takes from the community when you have a business. That’s why we believe in giving back.” For example, with every beer kit it sells, it makes a donation to the SPCA.

Additionally, two times a year it holds fundraising events for good causes including 4AydenStrong Foundation. It plans to keep its eyes and ears open for children in the area who may have health issues so it can raise money for them, their families, and research.

“There are just so many things to be done.” Elmiger said. “No body can do it all but everyone can do a little bit.”

If you want to visit Stony Run

The brewery and restaurant is open Tuesday through Thursday 11am to 9pm, Friday and Saturday 11am to 11pm, and Sunday 12pm to 7pm.

Its plans for the future include a building expansion, beer garden, event room, and the downtown location.