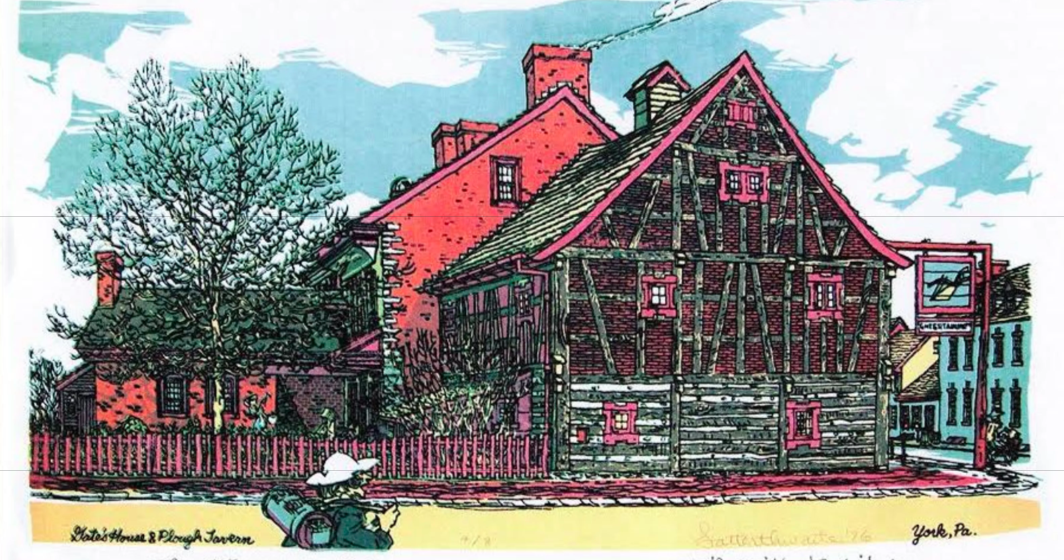 In America today, the unique blending of ethnicities and subcultures mean a fusion of death and funeral festivities. Some prefer services of celebration in their homes, others a traditional funeral service at a local church. Some family members write eulogies, and others prefer to hand out flowers as tokens of their appreciation.

Whatever the unique tradition, York has its own distinct tradition growing from our German roots.

Many say, including Scott Butcher and Dinah Roseberry in Spooky York, Pennsylvania, that Germans built “solen fensters,” “seelen fensters,” or “soul windows” into their homes. Germans believed that if someone died inside a building, their soul could become trapped. Their soul needed guidance — hence the solen fenster.

If you wish to see one of these solen fensters, visit the Golden Plough Tavern. Last week, I took a tour with Downtown Inc. to see the “spooky” side of York’s history. The tour guide, Kristen Dempwolf, skillfully took us around town to see the notorious locations of murders, mysteries, and legends.

One of these stops featured the Plough Tavern’s solen fenster. Dempwolf explained to us (using Butcher’s and Roseberry’s book as a reference) that in 1777, York had 300 houses and 22 taverns. Travelers would stop at the tavern to eat, drink, and sleep. Sometimes, the travelers would show symptoms that signaled that death lingered quite close.

Out of fear that the dead would be trapped inside the tavern, some believe the builders of the Plough Tavern incorporated a soul window into an external wall. If you visit, this is on Pershing Avenue, about waist height, and less than a square foot window in aged wood.

Jim McClure, author of York Town Square blog, wrote that it functioned as “an outlet for the spirit or dying people to escape to heaven” and that it may be mythical. However, a member of the York County History Center informed McClure that visitors from Germany have heard of these soul windows.

The Research behind soul windows

Meg Umphrey, a blogger, wrote early Dutch architecture included an aperture that was opened when someone died to allow the spirit to escape. Once enough time had passed, the family closed the window to “separate the earthly from the spiritual.” She wrote that may other houses in Pennsylvania featured seelen fensters but were covered once modern owners acquired the property.

A quick google search also revealed that people in Denmark practice the tradition of opening windows when someone dies. Denmark’s official website says, “Regardless of one’s beliefs about the afterlife, there is something comforting and revitalizing about opening a window for that certain loved one after he or she has died. It’s a gesture of letting go, but also letting in; bringing in the fresh air from the outside world and the promise of another day.”

But really, how prominent were solen fensters in traditional German practices in Pennsylvania?

Fortunately, I had the opportunity to study under Simon Bronner, a prominent folklorist, at Penn State. When I asked him about the validity of solen fensters, he spoke of  the openings as “only referenced to apparently impractical windows on early buildings.”

He said, “I had the sense it was probably an occasional practice among early settlers in isolated areas. There is also a possibility that the windows were put in but without the belief in mind. Like hex signs, it might have been a statement of ethnic identity.” Bronner also referenced Amos Long’s discussion of seelen fensters in The Pennsylvania German family farm.

June Lloyd, a prominent York historian and fellow blogger of Universal York, also researched the solen fentser. She’s similarly skeptical of the window’s purpose. She said, “Some of our Pennsylvania Germans were pretty superstitious, but not everyone, just like today.  So some people might believe a small window was meant to be opened to let out a soul, but more than likely they were put there for ventilation.”

So, what have we learned? The Golden Plough Tavern has a blocked-out wooden feature on an exterior wall. Outside of this fact, the rest is speculation. It is possible the architect or builders of the tavern incorporated their spiritual beliefs into the construction of the building. It does make sense, for what else could the aperture be? However, little research defends the claim that this is in fact a solen fenster. Bronner suggests solen fensters would NOT have been built into a public location; they were more common in private dwellings.

Regardless of its function, the wooden panel on the tavern teaches us about other worlds. During this time of year, Halloween evokes a desire to experience strange and supernatural realms. Yet, I encourage Yorkers to remember we have other worlds to study right here in our county – That of the past.