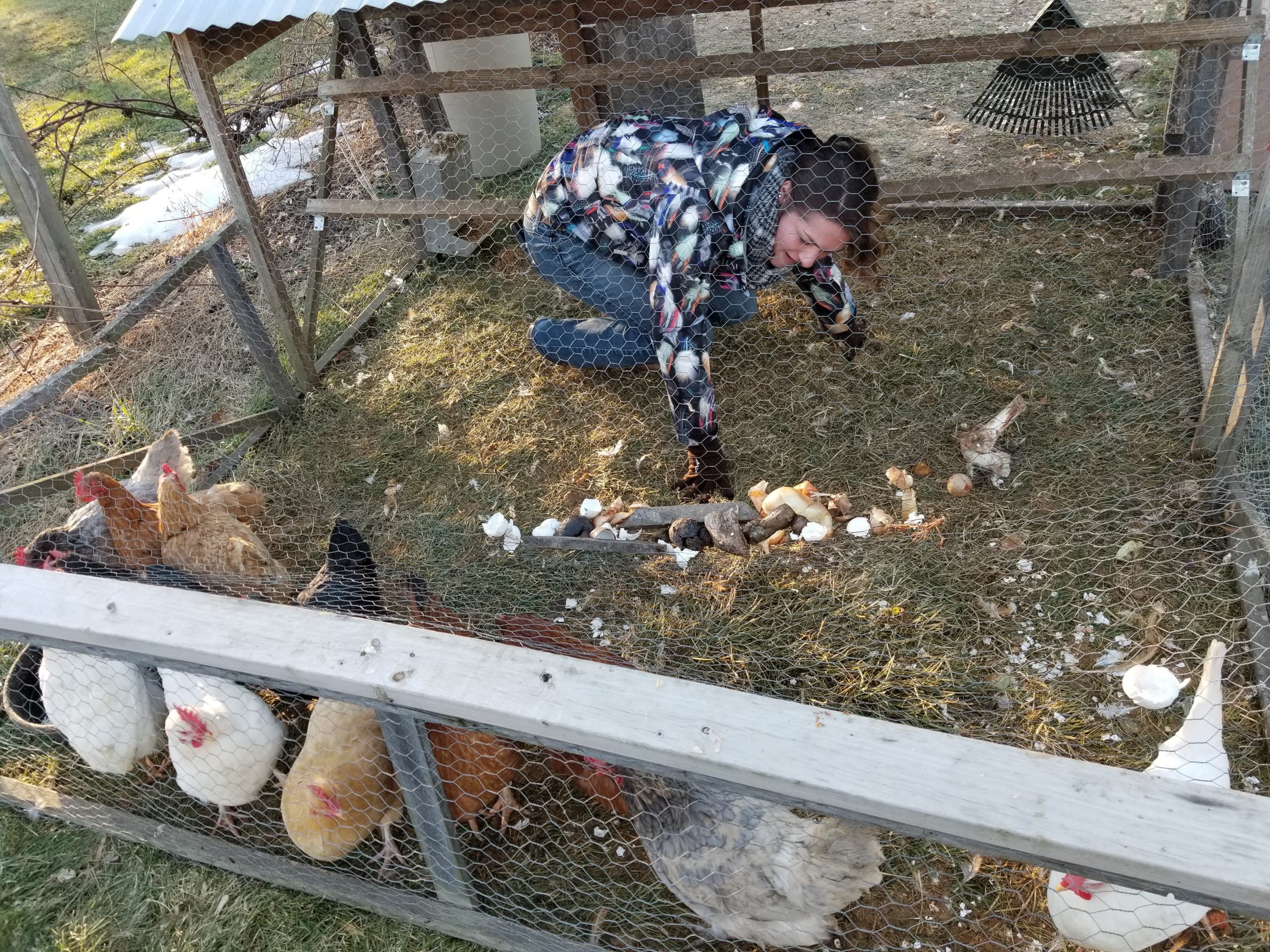 I wonder what the hens thought of me, a grown woman, climbing around in their coop. Jamie Kinsley Photo.
Posted by Jamie NoerpelJanuary 4, 2021 Wandering in York CountyNo Comments

I recently went to my first livestock auction. A friend of mine was getting rid of 13 chickens, so I tagged along to experience it first-hand.

Before we sold them, we needed to catch them. We watch them dart back and forth inside the mobile coop. We decide the best way to gather them is  is for me to climb inside the three-foot tall space. Of course, I’m wearing my good jeans.

One at a time, we capture the chickens by placing a hand around both sides, securing their wings to the body. Gently, we placed the chickens in spacious and breathable cardboard boxes. Since my friend and I both consider our birds more as pets than livestock, we attentively handle them with care.

Next, we secure them in the back of a 1986 Chevy S-10, driving the 13 miles to the Carlisle Livestock Auction.

The journey to the auction made me wonder about poultry journeys from Pennsylvania’s past.

Before the invention of the automobile, how did backwoods people take their flocks to market? Walking them, of course. Between 1790 and 1830, York County farmers brought their chickens to Baltimore or Centre Square York markets. Lancaster farmers brought their domesticated turkeys to Philadelphia, and I found a cool story about one such adventure.

Julius F. Sachse in The Wayside Inns on the Lancaster Roadside between Philadelphia and Lancaster (1912) described the walk from Lancaster to Philly.

Called a “turkey army,” the drive of birds proved a difficult task, Sachse wrote. Not known for their intelligence, the turkeys would trample one another when they crowded too close together. Dead birds meant lost profit, so the farmers sectioned them into smaller lots of 50 to 70.

Taking a long pole, a “shooer” would would wave a stick with a piece of red flannel at the end to corral the turkeys in the direction he wanted.

When we traveled to the Carlisle Livestock Auction, we averaged 40mph, about 40 times faster than the 19th-century turkey army. I picture a young man or boy, the typical demographic for a shooer, walking a mile an hour, and getting annoyed as the turkeys scurried in all different directions.

I experienced something similar when attempting to catch the chickens for auction. Even though they are nice birds, they weren’t too keen on being put in a box, understandably.

On the way from Adams County to the auction on Alexander Spring Road in Carlisle, we take backroads so we can travel slowly. My friend worries that one of the boxes will fly open, hurling a sea of feathery catapults toward the driver behind us.

Considering the slow and clumsy pace of the turkey mob, the shooers opted for all backroads during the 19th century as well. I picture the chaos of the chance wagon parting the stampede like Moses parting the Red Sea.

Once we arrive, we park the truck and approach an entrance. The door looks like it belongs to a speakeasy or an underground fighting ring. It seems like eternity to find the handle, but I finally located the peg that pulled back the wooden latch to open the door.

“They can tell we’re newbies,” I thought.

After checking the chickens in for sale, we ascended the old, wooden staircase to the auction arena.

Carhartt jackets and camo baseball caps adorn folk who seem to all know one another.

We lean up along old coolers that line the back wall — the nosebleed section — to maintain some level of social distancing considering not many people are wearing masks. People wearing leather work boots stained with mud and manure shuffle past, my favorite being a Mennonite toddler in her mother’s arms who waves as she passes.

Tonight is the Carlisle Livestock Market’s last night in business.  On December 30, Jim and Barb Degaetano, the owners, will close their doors.

After 40 years, the couple are ready for retirement. In an interview, Barb tells me she’ll miss it. “I think a lot of people came out tonight to see old friends,” she says. “It’s a gathering place for the farm families.”

Built in 1969, the auction used to be surrounded with nothing but farmland. Now, a hospital, hotels, and packaging facilities fill the landscape.

“It’s just the way America is growing,” Barb says. “The outskirts are getting developed, and that’s nothing to mourn. It’s just a part of a changing country.” Unlike many other people I’ve met who are involved in agriculture, Barb doesn’t lament the expansion of industry: “It’s just the way of the world. What are you going to do? Life moves on.”

The Degaetanos have their business and land up for sale, but no one has placed an offer yet.

To mark the end of the era, the auction house is fully stocked with buyers, sellers, rabbits, chickens, pigs, sheep, goats, and cows.

Dennis Calaman, a pig and beef farmer who regularly attends the auction, tells me that a normal Tuesday evening brings only about a third to half the amount of people we see that night.

Calaman introduces me to another couple. Bob and Jean Noss of Upper Frankford Township in Cumberland County have been coming to the auction for years. Bob’s family were dairy farmers, but he stopped milking in the 1980s. Bob and Jean then turned their attention to beef cattle, but that only lasted until the late 1990s when they sold the farm. Today, they live on two acres and raise two steer along with a pig for their own meat consumption.

I ask them how they feel about the auction closing. “What’s the poor farmer going to do?” Bob Noss says. He knows first-hand what it’s like to see a piece of American agricultural history be laid to rest.

“If you don’t have something to eat, then what are you doing to do?” Calaman asked.

Even though the Nosses no longer farm, they find ways to stay involved in agriculture.

After about an hour, we leave the auction with an empty truck bed.

The shooers of the 19th century turkey army didn’t have as much choice as to when their night ended. When the sun sank behind the trees, the birds decided they were finished marching by roosting in the trees, turning the “trees black with birds” wrote Sachse.

Throughout the night, the sentry shepherd watched for predators — beasts and thieves alike — to make sure their flocks were safe, taking turns to nap in the covered wagon.

A 1873 article from The York Dispatch reported that prices from a local market were 8 to 11 cents per pound for turkey. Chickens were 45 to 75 cents per pair (either alive or recently killed), whereas a butchered or “dressed” chicken went for 40 to 60 cents a piece.

The chickens at the auction were selling for three to four dollars a piece, so my friend should receive a check in the mail in a couple weeks for the sale. I wonder what the new owner is going to do with them.

In Pennsylvania Agriculture and Country Life, 1640-1840 Stevenson Whitcomb Fletcher reported that Pennsylvanians from the 1800s described turkeys as “mischievous and offensive.” Because of this, turkeys and other poultry were kept in low numbers.

Turkeys have been bred to have such large breasts that they can no longer naturally breed. Modern hybrid turkeys are all artificially inseminated, according to PennState Extension. That means if humans stopped impregnating them by hand, most domesticated turkeys would go extinct. If you want to watch the artificial insemination process, Mike Rowe from Dirty Jobs can show you how (start around 26:30).

We didn’t see any turkeys at the Carlisle Livestock Market, but we witnessed an essential part of American history still thriving. Yes, the closed auction means local farming families will look for another way to buy and sell livestock. But as Barb teaches us, this is just another step in the evolution of agriculture. Like my friend who decided to temporarily cease raising chickens for a while, change isn’t always a bad thing.