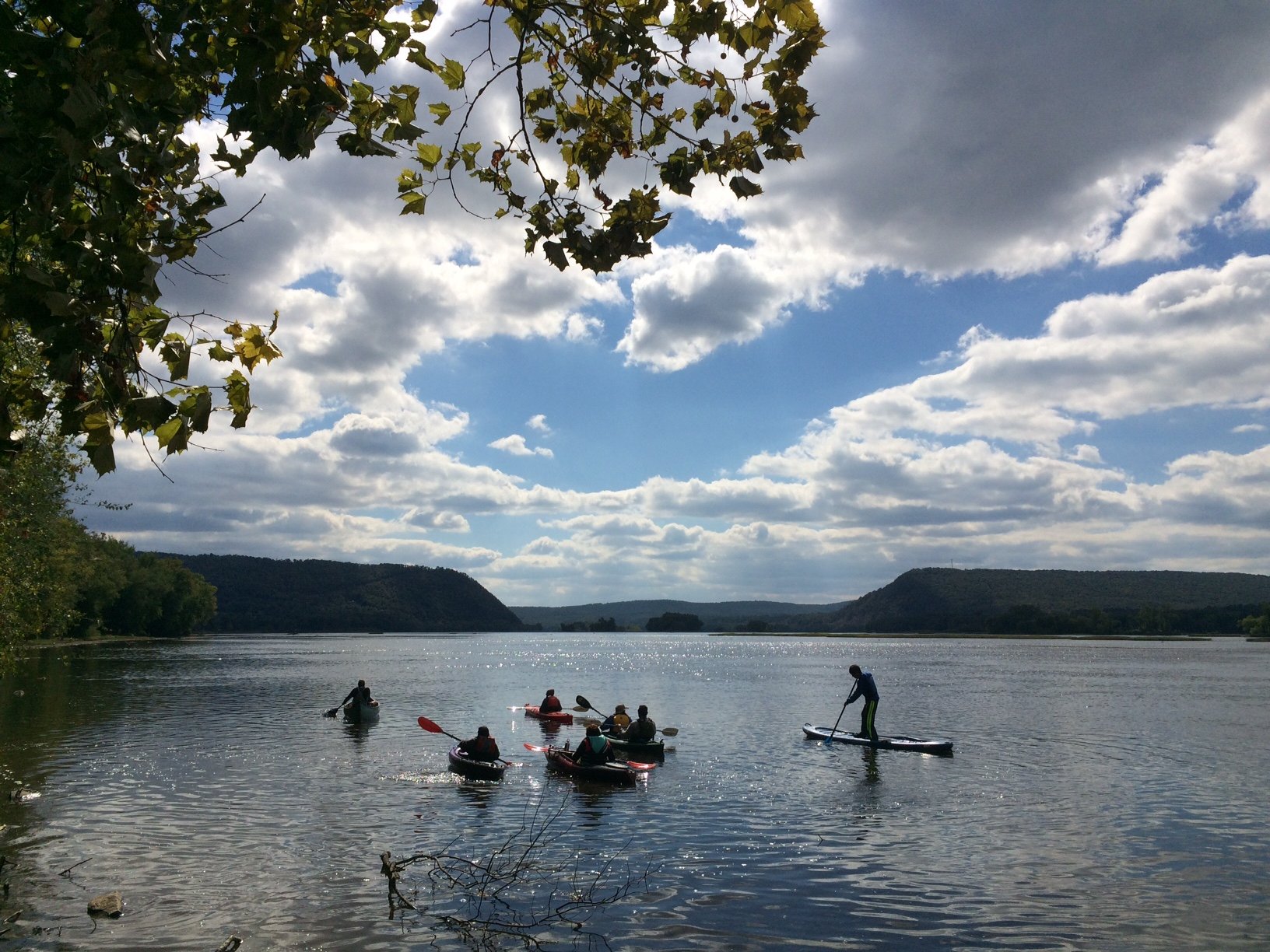 Many are drawn to the river as a form of relaxation and adventure. Brook Lenker Photo.
Posted by Jamie NoerpelSeptember 2, 2019September 2, 2019 Wandering in York CountyNo Comments

The Restorers: a novel about conservation and adventure along the Susquehanna

When I heard there was a new fiction book written by a local man about the Susquehanna River and conservation, I immediately ordered it from Amazon.

Released in 2019, “The Restorers” follows a group of people floating down the river. They encounter crime and corruption, love and loss, peace and violence. The author, Brook Lenker from Camp Hill, spent his weekends over the past 15 years crafting a story that’s ties in the right amount of adventure blended with social consciousness.

Using his experience from coordinating river Sojourns for the Alliance for the Chesapeake Bay, Lenker’s inspiration came from spending many days and weeks on the river himself. He also worked for the Pennsylvania Department of Conservation and Natural Resources and the Susquehanna River water trail project where he collected the mental images of the islands, wildlife, and scenery that inspired his book.

While reading, it’s easy to sense the deep contemplative thoughts Lenker pondered while floating. He infuses both a beautiful narrative and detailed imagery to make the reader feel like they could be paddling themselves.

For those who like to read about romance, travel, nature, and adventure, this book is for you. Furthermore, the book isn’t overtly religious, but Lenker believes church groups would enjoy discussing the spiritual-like voyage. Those who read classics such as “Moby Dick” or Walt Whitman writings know the spiritual lessons woven into their passages.

Like Jesus going into the desert, Reily, the middle-aged protagonist, signs up to journey from the spring of the Susquehanna in New York to the bay in 40 days. After his marriage ended and his only daughter grew emotionally distant, he yearned for the re-set button. The river acted as his counselor while trying to find himself again.

In an interview, Lenker told me that “rivers have a way of bringing out the fun, creativity, and quirkiness in people.” He’s met many people on their journeys and their personal qualities influenced characters such as Reily.

With trees and rocks slowly passing by, Reily’s odyssey of rebirth opened his heart as much as his mind. An intelligent and funny woman named Sol caught his eye, bringing him a sense of excitement. With the rest of the group, Reily and Sol grow close while drinking in the longevity of nature.

The river sprouted into a place where Reily could “stroke his soul” and find salvation. It made me think where I go to consult my own soul.

“Time and place had no meaning on the river but relationships did,” wrote Lenker, “especially one as eternal as the surrounding ridges.” Passages like this helped carry worries away for not only the characters, but for me as I read the easy-flowing novel.

I thoroughly enjoyed the book and unhesitatingly recommend it. But, a minor criticism crept into my mind while reading – it’s relatively easy to guess the plot. A close reader can pick up hints without difficulty. And, there is only one mention of York! (Page 218).

However, I highly recommend the novel for anyone wishing to ponder life. Like Lenker wrote,“Without occasional hardship an expedition lost its value, its significance; the joy was cheap and meaningless. Life required suffering to foster appreciation for the serenity of the routine.”

Like Mark Twain, Lenker has “an affinity for water,” he told me. Paddling, snorkeling, and sailing eased his worries and ironed out the creases caused by life’s stresses. As the Executive Director of the FracTracker Alliance, a nonprofit that investigates health concerns surrounding fracking, Lenker oversees strategic programing, fundraising, and operational aspects for the company. So, it’s easy to see where some of his stress originates.

Also like Twain, Lenker based his pen name off his connection with water. Near his family’s diary property trickles a small, unassuming stream known as Lenkerbrook.

Sam Clemens selected “Mark Twain” from his experiences on a river boat. Since such boats need about twelve feet to safely travel, measuring the depth of the water proved vital. A “mark” measured six feet and “twain” means two; hence “mark twain” for twelve feet, the safety level for river boatmen.

On October 9, Lenker will speak from 6:30 to 8:30 at the Shank’s Mare Outfitters. The event called “Restoration by the River” will include Lenker’s reading and discussion of the story in more detail including his experiences, insights, and reflections. “The natural world today is in crisis. The story is about getting involved. We need everyone to step up now more than ever. Maybe I can reinforce that through the lends of my story,” said Lenker. Come with your own stories to share as well!

See conservation at work during the Sasquatch Preservation 5 & 10k

Along the way, the characters in the novel learn of a development project that threatens to swallow up a large tract of land. Known as “Whispering Heights,” pristine farm and woodland stood dangerously close to demolition to make way for new houses.

“Was murdering the land a learned behavior or a genetic defect?” questioned Lenker in his book. The main conflict of the story included the paddling group’s efforts to thwart the development project.

Hoping to “entice [readers] to learn more about environmental topics,” Lenker worked hard to balance a story, nature, and issues such as development. However, he wanted the novel to be “informative and insightful without being too heavy.”

Even though development is necessary to some degree (we all need a house to live in), conserving nature provides spaces close to home that are wild.

On Saturday, September 7th, there will be a rare opportunity to run wild on preserved land in York County. The Sasquatch Preservation Trail Run, supported by the Farms and Natural Land Trust of York County, will take you through hundreds of acres of woodland, pastures, farmland, and trails in Seven Valleys. Whether you chose the 5k or the 10k, the journey starts with fellow runners and ends with food from The White Rose, smoothies from Smoothie King, fruit from Flinchbaugh’s Orchard, and beer sampling from Brewery Products (21+ with ID).

During the run, you’ll run along corn fields, hurdle over horse jumps, climb up large hills, and finish with a sprint through the South Branch of the Codorus.

This is the fourth year I’ve run it, and each time I witness another corner of nature that glitters with beauty.

In the novel, Reily found his “hill worth dying on” – the fight to stop the development of Whispering Heights. Considering the height of the trail climbs in Seven Valleys, you may just find the hill you die on as well. But, it’s totally worth it!

A brief history of trails and spending time in nature

Lenker is the only local who enjoys writing about nature. Published in 2016 by Yale University Press, “On The Trail” by Silas Chamberlin, Vice President of Economic & Community Development of the York County Economic Alliance, covers the history of American hiking.

Chamberlin writes that industrialization and urbanization generated a new appreciate for nature. By the nineteenth century, walking and hiking resonated with Americans who found themselves with more leisure time and higher wages. By the mid-1800s, Americans longed for the “pastoral-ideal” where people could celebrate the sublime tranquility of nature, just a short walk from their city lives.

Rather than fear the wilderness, this “middle landscape” provided a picturesque scenery, tamed by the trail keepers yet primitive enough to escape the city. Either as a community of trail-blazers or as individuals autonomously climbing on their own, Americans desired to be in nature.

Whether you prefer a quiet paddle ride on the Susquehanna or racing with your neighbors on the private trails of the Sasquatch race, I hope you get outside before fall hits.