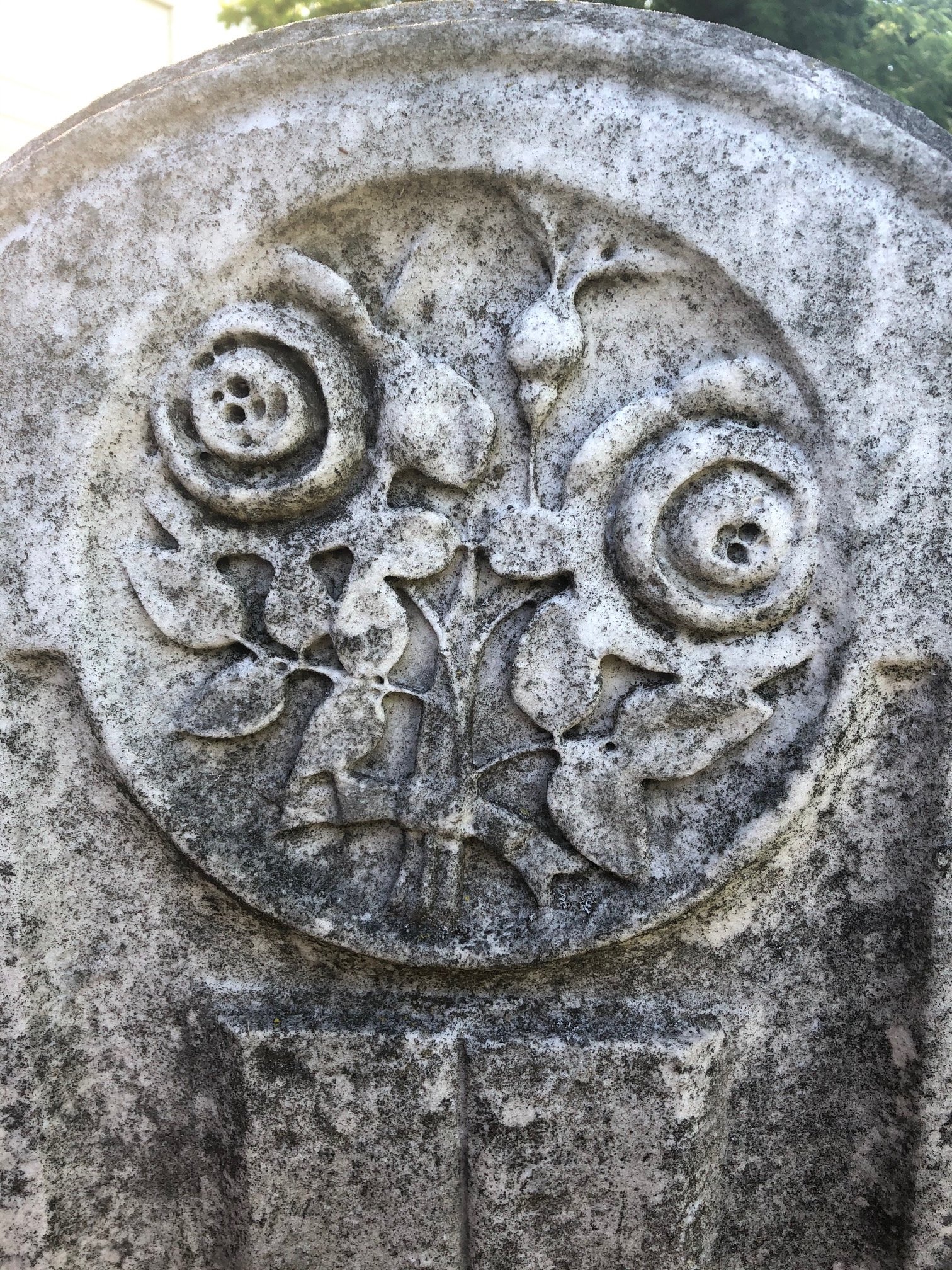 Who has the right to a written death, forever recorded on stone?

Some people are cast into unmarked graves. Others have elaborate tombs like the pyramids in Cairo, Egypt. Here in York County, we may not have pyramids, but the spectrum of gravestones span from unmarked potter’s fields to grand mausoleums.

In some cases, like my own family, we cremate our loved ones, and bypass a headstone all together. Sometimes, it makes me sad that I can’t visit my Nana or Pop’s gravestone (Jean and Leonard Giknis). Nonetheless, I appreciate visiting them at a special place where they live in my memories.

For those with a headstone, we can uncover many things unnoticed by those who do not know what to look for.

When I hear the word “read,” I think of a book. But in reality, to read is to interpret the meaning of something. In the middle of a hike, I’ll look up, scrutinizing the sky for rain clouds. I’ll read the classroom when I think my high school students need a brain break.

In this way, I read the gravestones in the southeastern York County’s Wildasin cemetery, looking for clues to the people and community that lived there hundreds of years ago.

Previously used as a family’s graveyard, the Wildasin family opened the land to public burials in 1829. By 1841, a building was constructed to function as a public school and house of worship. Today it’s called the Wildasin Meeting House and Cemetery, and it’s open to the public.

About a hundred or so headstones stand as the last representation of the individuals who called York County home. With the park surrounding me, I feel enveloped while standing just outside the metal fence. I go in and start reading the inscriptions.

At the top of Jacob’s small limestone headstone is a plant stem that is missing the flower’s head. When flowers are featured on tombstones, they serve as “mirror symbols” or “antithetical meanings.” This means the image represents two opposites – hope and loss, grief and relief – revealing the complexity of bereavement.

The Association for Gravestone Studies writes that broken flowers and roses specifically symbolize that life has been cut short – the death of a child. Considering that Jacob was an infant, it makes sense that the stonecutter and/or family chose this iconography.

Interestingly, the use of flowers on gravestones decreased during the twentieth century. Some scholars say this is directly correlated with the popularity of funeral flowers. As we started using live flowers for funerals and viewings, the use of them in iconography went down.

The more I look around, the more I see smaller stones – an indication that this community suffered the loss of many children. Revisiting my purpose of “reading” the cemetery, I can conclude that child and infant mortality must have been relatively high. Between smallpox and other epidemics, the dangers of living along the frontier, rudimentary medical practices, and poor diet and nutrition, I can empathize with the parents who struggled just to keep their families alive. Surviving was a full-time job.

My appreciation for the time period in which I was born increases with each second I spend in the cemetery.

What epitaphs say about us and our community

When studying history, we try to understand how people lived based on what they left behind. Considering I can’t ask the people in the Wildasin Cemetery about their beliefs, ideas, or even personality, I turn to an immediate source of their preserved material culture – gravestones.

So, what can we ascertain from examining the carvings on gravestones?

Epitaphs, or inscriptions on tombstones, can include a person’s birth date, age at death, and familial relations. For example, the photo below shows two gravestones side-by-side. Clara L. Hess on the left, and her husband, Jacob L. Hess, on the right. In addition to their birth and death dates, we also read “At Rest” on the bottom as well as two ferns along the top. Some scholars say that couples are buried this way to replicate how they were standing when they were married.

Let’s talk about gender for a second. I’d like to point out that these stones are very similar. They are the same size, with the same iconography, facing the same way, made from the same material.

I argue that these stones largely denote a sense of equality between the two individuals, at least in death. With that said, there are some differences. Clara does not have her last name on her headstone. That means that if anything were to happen to Jacob’s headstone, we wouldn’t know how to identify her. Additionally, her stone explains her relationship to Jacob, “HIS WIFE,” whereas his specifies no such connection.

Some feminist scholars, like Betty Friedan, argue that women have not been acknowledged for their own accomplishments, but rather their relationship to others. A woman was someone’s daughter, wife, or mother, but not an individual with her own aspirations. I get a hint of his ideology while standing in the Wildasin cemetery.

Much of gravestone research is educated guesses. We can never know for sure what exactly people intended by the carvings. But, we know enough to provide a speculative interpretation. This is my interpretation, and I hope it helps you think about how people in 100 years will interpret your own gravestone, if you go that route.

Read Part 2 on reading tombstones, in which I will discuss more about the Pennsylvania Germans and Scotch Irish.

Watch Domi Miller and I talk more on Witnessing York!

If you want to read more about material culture in general, I recommend Henry Glassie’s Pattern in the Material Folk Culture of the Eastern United States.