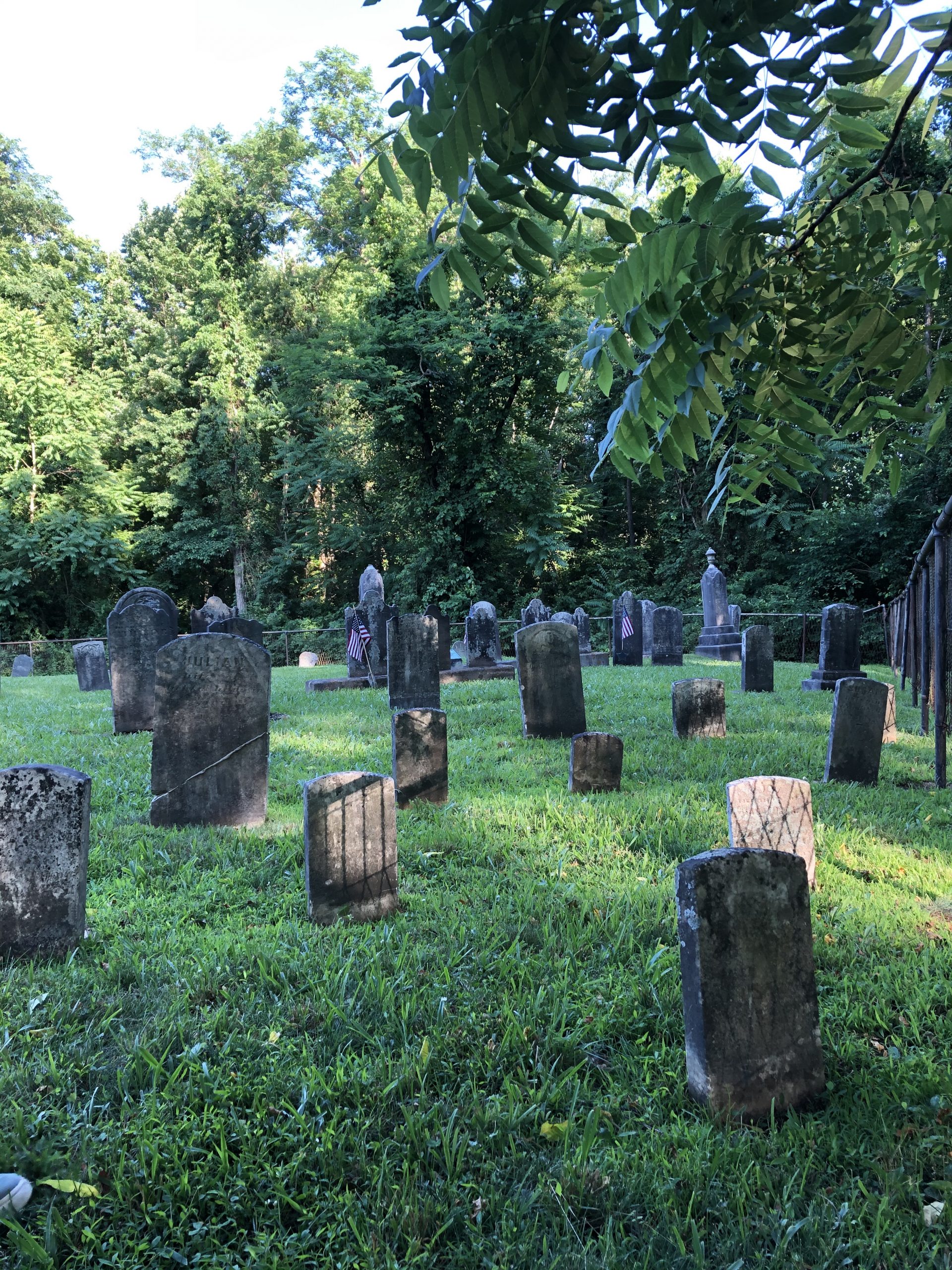 The ways we memorialize our family members say a lot about us. Within the rich tradition of remembering the deceased via stone markers, scholars can connote values, belief systems, lifestyles, relationships, and much more.

The Association for Gravestone Studies writes winged hourglasses symbolize the way time flies, speeding past us. If you ever see an hourglass on its side, it means time has stopped for the departed.

Last week, I analyzed the ways we “read” gravestones in Part 1 of this blog article. I visited the Wildasin Meeting House and Cemetery located at  Codorus State Park. This article continues that discussion.

Gravestones as an art form

I try not to take the craftsmanship for granted, so I closely examine the stones. To make sure they left no evidence of the chisel, stonecutters would use time-consuming soft blows, several times, to refine the cut as much as possible, leaving behind their artistic flair with each letter and design.

For instance, the pinwheel off-center and divided into five sections in the image below strikes me. It’s different from the pinwheel between the Ds, presumably Date of Death.  The gravestones record the outlook of the individuals who are now buried under the soil, or at least the person who chose the iconography.

The local craftsman or family selected this iconography to send a personal message to you and me – the people visiting these sites hundreds of years later.

The gravestones serve as an art gallery with stylistic variations and individualism, but also an anthology of the community’s identity. They function as a personal and social document. It includes names, birthdates, and death dates, but also relationships to others, their church, and their heritage.

The images and words reveal the social codes and shifting values regarding religion, ethnicity, heritage, occupation, and patriotism. For example, stars or eagles show pride in the country.

On another gravesite I find a hole in the stone – eternity with no beginning or end. It invites me to touch it. The imperfect notches resembling a crude weeping willow tree remind me of pain felt by the family when their loved one died. How long did they stare at this image? The one I am looking at right now.

The Wildasin cemetery bridges the gap between two distinct identities in York County: Pennsylvania-German and the English and Scots Irish. Renae Weidner, the Environmental Education Specialist for Codorus State Park, believes most of the people buried there are from German descent. She hasn’t seen any burial records that prove Scots Irish lineage. However, the language change to English proves there was an influence.

Folklorist Simon Bronner writes that the Pennsylvanian Germans used gravestones as a “public statement recognizing the individual as a family member and a member of the Pennsylvania-German community.” Popular iconography included hearts, angels, stars, rosettes, and tulips.

These images were also common on birth certificates via an art form called Fraktur, specifically Taufschein. “The birth and baptism certificate, or Taufschein, is by far the most common form of fraktur and is unique to Pennsylvania German culture,” writes Penn State and their Pennsylvania German Fraktur Collection. Local historian June Burk Lloyd has also written extensively on the topic.

Early Pennsylvania Germans came from socioeconomic classes from Europe that most likely did not install tombstones. As beginners, they started with smaller stones with rounded tops. Jeri Jones, a geologist, says many of the early stones are slate, such as the one with the six-pointed star below.

During the late 1700s, stonecutters deviated from gray slate and red sandstone to white marble or limestone. Gravestones also became taller and thinner.

Bronner writes these changes resemble a “certificate” of a worthy life: white, vertical, and articulate with more lettering and embellishments. This “whitening” also could be seen in home decor such as ceramic tableware and paint colors.

These are traits that mark the community. But beware, do not be mistaken into oversimplifying the individuals into one homogenous group. Anytime we over-generalizing people, it can lead to stereotyping. We can tell a lot from the graves stones, but we will never get the full story of the human beings that lived and worked on this land.

When looking at the Scots Irish community in North Carolina and Pennsylvania, David Patterson wrote that verse epitaphs first became popular during the Revolutionary War. In his book, The True Image, Patterson explained that during the early nineteenth century The Great Awakening affected the tone and themes. For example, phrases turned from brief and modest, to prideful assertions of their faith. By the end of the nineteenth century, language and symbols declined.

Most Americans prefer a burial plot with a headstone, but other cultures differ. In South Korea, for example, cremation is becoming more popular. Places where urban development limits the space for large burial plots means taking up space is unsustainable.

In Ghana, elaborate coffins showcase the deceased’s’ interests, occupation, and status such as designs of Coca Cola bottle, animals, or a Porsche. Sometimes, the funerals cost more than weddings with advertisements on billboards to encourage the community at large to attend.

Muslims tend not to believe in cremation or embalming since their physical resurrection will take place on their Day of Judgment. Facing Mecca, their graves tend to be flat stones, preventing people from walking across the body since that would be a sign of disrespect.

Facing our own mortality can be difficult. But reading gravestones provide a cursory look into the lives of the people whose bodies lay just below our feet. When walking through a cemetery where loved ones rest, we recall stories. These memories give us a foundation to better understand ourselves and our community.

The saying goes, “stop and smell the roses.” But I implore you to stop and read the graves. Become a witness. Take time to temporarily suspend your daily tasks so that you may have a chance to reflect on the lives of our ancestors.

Where to find the Wildasin Meeting House and Cemetery

If you want to see the cemetery for yourself, it will require a small hike. Park in the lot off Bankert Road and look for the gravel road to begin the easy three-quarters of a mile walk. There are lots of mountain bike paths, but the trail to the cemetery is by far the most distinct.

Under a canopy of trees, you’ll see the meeting houses’ white corner jutting out. A clearing opens and you’ll find the cemetery with a gate. Since I’m curious, I wanted to see if the meeting house door was open. It was. Visitors can go inside to see the wooden pews and platform. Please show respect for this sacred place.