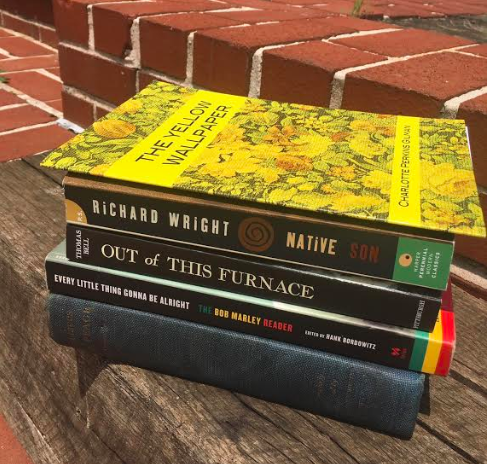 What valuable lessons can we learn from reading and talking about books? Jamie Kinsley Photo.
Posted by Jamie NoerpelJune 2, 2019June 3, 2019 Wandering in York County2 Comments

About two months ago, my 97-year-old great grandfather, Leonard Giknis, passed away.

Going through his belongings, I found a few books in his collection that surprised me: Moby Dick, The Autobiography of Benjamin Franklin, and my personal favorite – Goethe to Ibsen, in which he scratched out the title to read “Go to hell.” (My Pop was pretty spunky).

Pop never talked about the books he read – they just became a part of him. And, I’m sad that I didn’t get a chance to chat about what these books meant to him. What surprised him when Moby Dick‘s Ishmael wakes up in bed with another man? Did he apply Franklin’s lessons on humility?

For many, Moby Dick is a voyage of discovery that gives some readers personal insight into their own meaning in life.

In fact, for my last graduate class at Penn State, I took a literature class in which we read Moby Dick. At the conclusion of discussion that night, the professor, Dr. John Haddad, bestowed gifts of whale bottle openers, calling us up to shake our hands as our peers waved electronic candles on our phones. This ritual symbolized a passage we journeyed individually yet collectively, coming out the other side with new found knowledge.

For me, Moby Dick made me think of how man desires control over the natural world (Ishmael and the whale) in order to conquer it for a sense of power.

What did my Pop think when he read it? As a noted artist, he painted a picture of a whale. Was it based on the book?

For many of us, we remember our grandparents and great-grandparents as elderly, sitting in their living rooms or kitchen tables with eye glasses and a newspaper in front of them. My Pop, for example, always played classical music in the kitchen, a cat on the table, and ranted about the government or shared his honorable service in World War II.

I didn’t realize what a lifetime – over 500,000 waking hours of thinking, reading, talking, painting, and crabbing – could amount to in a person. He walked on this earth for almost a century, and I didn’t get a chance to talk about his books with him.

I mean, I found books like The Works of Voltaire, Prefaces to Peace by Herbert Hoover and Hugh Gibson, and Every Little Thing Gonna Be Alright: The Bob Marley Reader! I don’t know if he read all of them, some have notes in them and some do not, but he clearly exposed himself to some deep-thinking that, frankly, I’m sad I missed out on unleashing.

So, I thought I would take the time now to write down some of the most powerful books I’ve read as an inspiration for you to 1) also read and 2) talk with others about what you read.

Since this is a history blog, I’ll stick to classics, knowing there are many more pieces of excellent literature out there.

Native Son is a fictional story about a young Black man who lives with his mom, brother, and sister in a cramped, 1930s Chicago apartment. Throughout the novel, Bigger Thomas, the main character, struggles to find economic stability and opportunities to escape the cycle of poverty. I don’t want to give you any spoilers, but let’s just say it gets pretty dark. As a twenty first-century reader, you’ll find yourself both rooting for and angry at Bigger for his choices.

While many people criticize the books – stereotyping young African American men and portraying women as powerless victims – Richard Wright, the author, wrote the book to confront racism. A part of his book was a reaction to Uncle Tom’s Cabin, which he felt did not challenge the readers enough. He vowed his novel would different, more deep, and would require facing issues without tears (Bigger is no tragic hero).

Born in 1908, Wright’s father, a sharecropper in Mississippi, abandoned the family. This left Wright’s disabled mother dependent on others.

Even though the book is about a crime, it covers more of the societal elements that created the mentality that would produce a criminal.

By the way, please, don’t watch the 2019 HBO movie before you read the book. It fails to capture the inner monologue of Wright’s (through Bigger’s) hurt and pain that most of us can only imagine.

Those of you looking for a faster read, this dystopian-like short story depicts the way women are treated in the late nineteenth century.

The Yellow Wallpaper is about a woman suffering from mental illness who is put away in the attic of a colonial mansion to spend most of her time in one, isolated room. The prisoner fixates on the florid, yellow wallpaper decorating the walls until it becomes an obsession.

Some believe the author, Charlotte Perkin Gilman, wrote the story based off personal events. After having her daughter, Gilman experienced nervous disorders – today we guess it was postpartum depression – and was sentenced to a “rest cure.” S. Weir Mitchell, the physician who invented the treatment for women in their twenties and thirties, believed the cure for anxiety and nervous disorders was for women to be alone, in a solitary room without visitors, exercise, fresh air, reading, artwork, or correspondence.

Do you maybe see the problem here?

We know today that the exact opposite – going outside, expressing oneself, and friendships – can actually help those experiencing anxiety.

Unfortunately, Gilman committed suicide in 1935 with chloroform. But, she left us with this thought-provoking story that makes me appreciate the modern age since it includes talking about mental health and empowering women.

(I actually read The Yellow Wallpaper with two friends a few months ago. It was helpful because we all came to the discussion – at York’s Liquid Hero because who doesn’t love books and beer – with different perspectives. I tend to miss things when reading, so talking about our books can illuminate skipped-over “ah ha” moments.)

Out of This Furnace by Thomas Bell, 1941

This historical-fiction novel tells the story of immigrant labor in the steel mills of Pittsburg around the turn of the century (Briefly stopping in Harrisburg). Out of This Furnace chronicles three generations of Slovaks and their acculturation into American society as well as their evolving role in politics and unions.

No matter how hard people worked, it never seems like there was enough money. However, their desire for a better life never slowed them down. They kept working, keeping their families close.

The characters are fictional, however many of their experiences are based on historical truths. What I liked most about this book was the way Bell, the author, depicts the working class: frequently moving while pinching pennies yet almost always with pride. They found creative solution for things they couldn’t afford such as learning trades and skills for a source of economic freedom.

Talk, write, and live about the ideas you read

Near the end of Out of This Furnace, a character says, “The only trouble with books, is they’re written by writers.”

In other words, some people write who have no experience living. As I sit here writing this blog, my husband took our dogs back to the creek with about ten of our friends. I missed out. However, I’m going to enjoy seeing them all tonight at my cousin’s wedding and Sunday at the Jefferson Hill Climbs. Life’s about balance.

The last time I saw him, Pop gave me a painting. And, since each painting has a story, he told me about the inspiration behind the scene.

He and my great-grandmother, Jean Giknis (my Nana), were riding their horses on a balmy summer day. Not to my surprise, they were fighting (They loved each other deeply but they both had short tempers and quick tongues). At one point, they stopped and argued pretty heatedly near a stone house with a large tree in the backyard. So, when they returned from their semi-ruined ride, they separated themselves – Nana to the garden and Pop to his paint room.

After a few hours, Pop took the negative scene where they fought down to Nana as a gift, transforming the location into a positive memory filled with apology, beauty, and love. Even though my Nana died almost ten years ago, my 97-year-old great-grandfather cried as he told me that Nana also cried when she saw the painting. That was the last moment I had with my Pop.

As I’m tearing up now writing this, I remember the tumultuous love they had for one another. If Einstein was right, energy never disappears; it’s only converted into new forms. Even though my great-grandparents are gone, their love and passion has been converted into the paintings hanging on my walls and the affectionate memories in my heart.

My Pop didn’t write about his life experiences – he painted them.

So, talk about the books you read, share them with friends, hand down your books to your kids, grandkids, and great-grandkids, or paint them.

Books are about what it means to be human, to live. Life doesn’t occur in a vacuum, so why should reading?

Jim McClure has also recently written on reading in York on his blog, York Town Square.

And, by the way, you don’t have to write alone either so come to the York Writers’ Roundtable June 6th at 7:00pm!

P.S. Shout out to one of my readers who corrected an factual error about Out of This Furnace! Even blogging doesn’t occur in a vacuum.