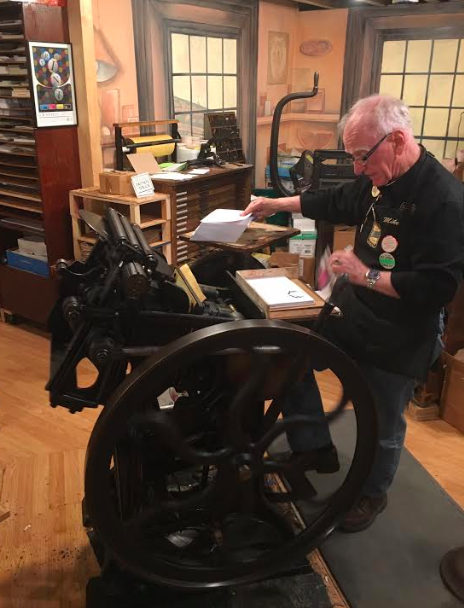 Reading books on iPhone and paper: The death and life of the printing press

Living in Seven Valleys, my commute to Hershey eats up a large chunk of time. It takes me an hour to drive to work, one-way.

Luckily for me, Bluetooth technology and Audible speed up my commute by narrating my favorite books. Right now I’m enjoying Jane Jacobs’ The Death and Life of Great American Cities.

With more people turning to electronic forms of reading, I wondered if the printing industry, as we know it anyway, was dead?

Through my research, I’ve learned the printing press is not dead but very much alive. It just doesn’t look the same as our grandparents’ time.

A brief history of printing in the United States

For my last semester at Penn State Harrisburg, I wanted to take my favorite professor, Dr. John Haddad, and his American Literature class. The following information on printing came from one of his lectures:

Between 1825 to 1850, the advent of mechanized printing expanded publishing. This, in addition to cost-effective railroad transportation, made books affordable so the average person could read.

Before this, books were expensive so if an American did own a novel, they would read it over and over again.

At this time, authors and printers concocted their own contract (including the author’s earnings, which amounted to whatever the printer agreed to pay for the rights to the content). That means an author’s only income came from money paid up front; no royalties existed.

Noah Webster was one of the only people who did well selling blue spelling books and, later, the dictionary.

Owning a printing press meant printers mastered many skills. Since no marketing department or book distributors such as Amazon or BAM existed during the mid-nineteenth century, printers wrote advertisements for newspapers, sold books in their own shop, and arranged exchanges with other book sellers.

Furthermore, printers set their own type and edited most of the book themselves – with no computers. Can you imagine?

This is the reason why early American novels such as the 1791 book Charlotte Temple by Susanna Rowson were so short – a printer is less likely to pick up a longer book because it means more money and more risk.

For this reason, printers had to know their audiences. For a budding author, printers produced only a few hundred copies, just in case they didn’t sell.

Yet, sometimes a book would score a success and fly off the shelves. However, by that time it was too late for the original printer because others produced pirated copies, taking away potential income from the first printer.

It was quite the gamble.

So, farmers almanacs and Bibles were the most reliable money makers.

Across the river in Lancaster, a club champions the preservation of the printing industry. The .918 Club and museum host hands-on workshops, special events, and demonstrations.

The name .918 comes from the height of type set – the individual letters and numbers arranged into sentences so printers could stamp ink onto paper.

When I chatted with Mike Donnelly, a master printer, he described his love for the craft: “There’s a satisfaction in doing things yourself.”

Donnelly explained the independence that comes with printing. “There’s no IT guy,” he said. When Donnelly prints, it’s raw manpower, and he has to fix things when they break.

In addition to feeling the freedom of making something on his own, Donnelly says printing enthusiasts enjoy teaching  people about our history. Visitors savor the tactile feel of the equipment as well as the beautiful product of their labor.

What is the future of the printing industry?

This is a contested issue. With the rise of electronically socialized media, many believe the printing press will fade.

For instance, print as a communication tool has changed rapidly. Look at how you’re reading this blog post right now.

Let’s examine some ways in which technology has replaced print.

However, Donnelly points out that the printing industry is not dead – it’s just evolving.

For example, more and more engaged couples, Donnelly believes, want wedding, bridal, and baby shower invitations that are indented. That intoxicating, tangible sensation you feel while running your fingers over the impressions of pressed letters attracts people to the traditional printing press.

While digital technology may be replacing some things, print still plays a vital role in our lives.

What types of print is here to stay?

Just as in the 1700s, religious texts and children books saw an increase in production and sales in 2016, according to the Association of American Publishers.

While Kindles and other eBooks build popularity, reading preferences continue to support print books. In fact, eBook sales have declined in recent years while print books sales have been trending upward since 2013 (even if it is at a snail’s pace).

If you want to learn more about the printing industry, the Lancaster’s Printers Fair will take place on Sept, 20-21.

So, while the printing industry is not the same as it used to be, it is still alive.

Those who love and study history understand that change is inevitable.

And even with my Audible audiobook purchases, I still often buy the print version of the book. I think I just like to look at them on my bookshelf. Every time I pass them, I think about the messages of the text while reliving a part of my commute. For example, I always think of the Sheetz off Route 30 near 616 when I open my Edgar Allan Poe collection to The Black Cat because that is the exact location where I heard the excruciating details of the fictional murder.

I hope you enjoyed my digital blog about printed texts as I continue to listen to my audiobooks.