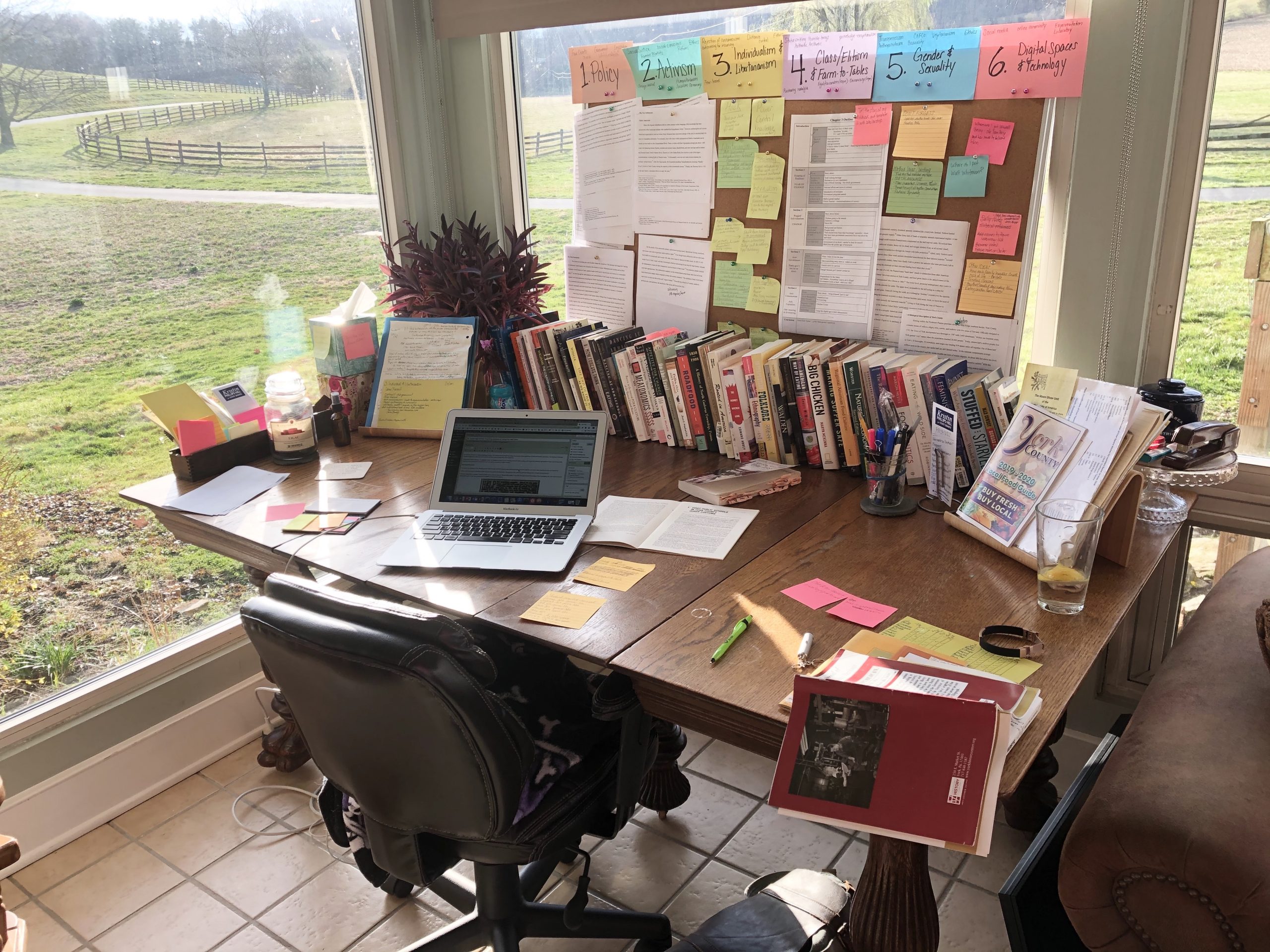 On Monday, March 16, I started teaching virtually. The Coronavirus is simply too contagious to chance large gatherings of brick and mortar classrooms.

My freshmen American Cultures students at Milton Hershey School will learn about history through their computers. From my home office overlooking Seven Valleys area fields, I chat virtually with my students who are spread cross multiple states up and down the east coast.

Unlike other school districts, I’m relatively lucky. My students are one-to-one, meaning they each have a laptop, and we give our students wifi boosters if they need access to the internet. Even though we’re locked-up inside our homes, our school is still in session.

We’ve got many challenges facing us (Would you have disciplined yourself to do five hours of classwork everyday when you were fifteen?), but the first week is off to a great start.

Over a century ago, an epidemic hit York County that caused the schools to shut their doors, too. However, they were too slow and too quick to act. The Spanish Flu came in waves.

With limited technology came limited information. After enough people succumbed to the illness, the school shut down. However, they re-opened before the time was right.

By December 19, 1918, the virus entered Red Lion borough with more vigor. Physicians “felt that it was causing more people to take their beds than did the first attack, and that it would be necessary to close schools, churches, and other public places a second time,” reported a newspaper. The lesson learned is to take precautions and exude patience. Life will get back to normal but we don’t want to risk another contagious wave.

What did teachers do? Many volunteered at city hall to tabulate the cases of influenza and pneumonia that physicians reported

A newspaper article from The Gazette and Daily on October 26, 1918 reads, “It cannot be gainsaid that they took hold of the situation in York with great energy and that little was left undone to keep down the influenza.” The article continues, “Of course, the action of the state authorities in calling off the York Fair and the general closing order had much to do with the situation.” I can’t help but notice the similarities to today’s pandemic.

Teaching at a distance and spotting fake news

Teaching is my purpose in life. Studying people from the past and their choices helps students develop their own identity and explore their character so they can improve it.

I focus a lot on primary documents so kids can examine sources for themselves. Recognizing bias cultivates informed citizens who critically analyze sources.

With the Coronavirus outbreak, I want my kids to know when to listen to officials and experts in the field, but also to check the validity of their messaging. So, I use advertisements from York’s past to help them evaluate the credibility of sources (see below).

This is an advertisement from The York Gazette on January 6, 1885.

I like this document because it reveals the power of persuasion. For example, many people in York identify with the “working class.” The direct call-to-action for “all ages” and “both sexes” means, of course, the advertisement applies to everyone.

I ask my students, “What warning signs can you identify that indicate this advertisement may not be authentic?” For starters, the document doesn’t explain what it’s selling. Readers are asked to send in ten cents for empty promises. The takeaway? Know what you sign up for, be informed, and do your research. Let’s look at another advertisement.

On September 1879, The York Gazette published this advertisement. While 35 cents only equates to about $9 in today’s money, the advertisement plays on people who are lonely. It may have been fun for teenagers to send in a few cents to reveal the identity of their future spouse, but this brings me to a very important point.

People who are desperate, whether it’s from a chronic illness, mental illness, or feeling of helplessness, reach for any shred of hope. These documents target vulnerable populations of people who send in their hard-earned cash for the sheer possibility of money, love, or a better future. It’s important to empower the disenfranchised – people who are easily manipulated by fruitless promises so they don’t succumb to scams and others who may use them.

For teachers who might start teaching virtually in the next few weeks, here are my recommendations

While it’s not the same as being in my classroom, online learning is a great alternative. For example, I record my lectures via “screencasts.” That means I present my PowerPoint (or Google Slides) while recording my voice, explaining the lesson. Seeing my face and hearing my voice brings a sense of normalcy into this chaotic milieu.

I originally made assignments due by the end of the school day – 3:15 P.M. However, many parents were asking the kids to babysit other children or to perform house chores, inhibiting their ability to complete my work. Changing the due dates to midnight or giving students at least 24 hours to complete the assignment decreases the amount of email requests to unlock an activity.

As a recommendation from a friend, I hold “office hours” everyday. It’s like a conference call where students can ask questions face-to-face. Just being able to check-in with them, asking how they are holding up assures them that everything will be alright.

Everyday, I have an assignment that I grade. It’s called the “Essential Question” and captures the main point of the lesson. Their responses must be four sentences, similar to an essay, to help improve their writing. This is to check to make sure they’re learning and provide valuable feedback. If you stop giving feedback, they’ll stop doing the work. Write more than a “good job!” or “well done!” Provide tailored comments that let the kids know you’re actually reading their work.

Finally, cut back on the material. Our kids are already stressed from the change in their routine and the fear of the unknown. 30-45 minutes a day keeps them engaged without burning them out.

Most importantly, be that positive light for your kids. They need someone to lean on and, as teachers, that should be us! We’re all in this together. Go team!