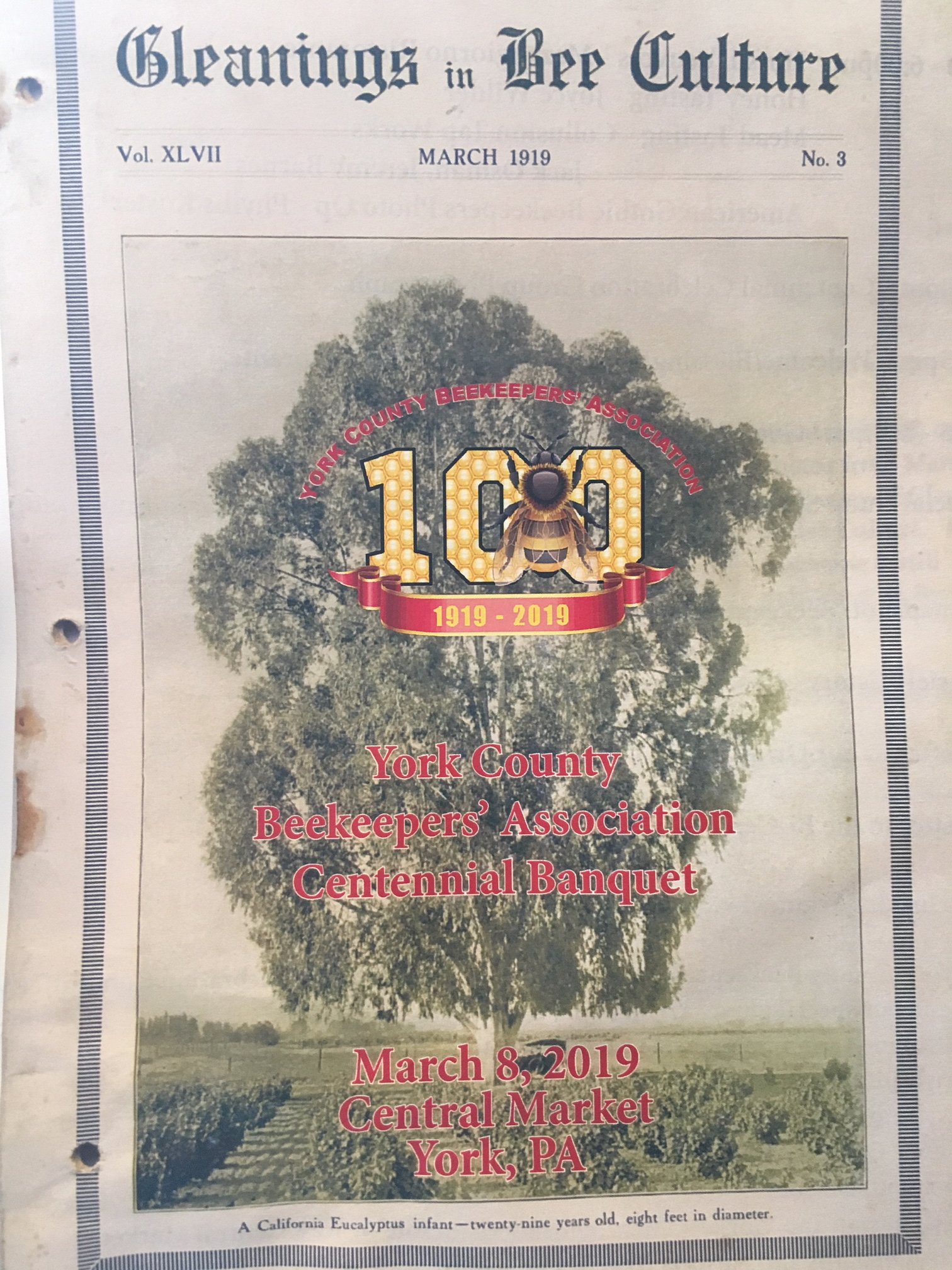 Preventing the ‘insect apocalypse’: 100 years of beekeeping in York County

This past Sunday, a raccoon attacked one of my chickens. I heard one of my hens squawk loudly on my back porch so I got up from my computer to check it out.

I found a large, gray raccoon grabbing at her feathers right outside my door. I screamed! I didn’t know what to do.

So, I sailed outside clapping my hands and yelling at the top of my lungs, “You get out of here!”

It got me thinking about wildlife that encroaches on our lives. My house is nestled in farm country in Seven Valleys. Living on the fringe of wilderness and civilization, I can’t necessarily blame the wildlife that crept onto my doorstep because really, I’m living on their doorstep just as much.

Bugs and insects are a part of that wildlife. Even as I write this article, I see dozens of ladybugs taking circular walks across the glass pains of my French doors.

Insects are one of our closest non-domesticated neighbors. Spiders find their way into our window sills, ticks burrow into my dog’s skin, ants creep up into the donuts I left sitting out on the kitchen counter, and bees hum in my garden.

However, in a very real sense, insects are some of our most secretive mysteries. Is that spider venomous? Will that bee sting me?

One group trying to inform us about the insects living outside our homes is the York County Beekeeping Association. And the group is on the front lines in combatting what is called an “insect apocalypse.”

And this year marks a time to celebrate.

On March 8th, 100 people attended the 100-year anniversary of the YCBA at Central Market.

Dinner, sponsored by Mezzogiorno Ristorante, kept everyone full for a fun night of storytelling and history. Following dinner, various presenters congratulated the group including Doug Hoke, a York County commissioner.

The highlight of the evening was a presentation by Dr. Deb Delaney, associate professor of Entomology from the University of Delaware.

Delaney, a self-described “beekeeper before an academic,” went to school to learn more about bees. The colonies of bees spoke to her as a woman and its “beautiful matriarchy.”

The colony focuses on the collective, the state over the self. Humans are not the masters. Rather, they are the students.

Throughout her presentation, she read poetry about bees, analyzed art, and discussed paintings.

Then, her tone changed. A slide suddenly appeared on the screen with the title “The Loss of the Bees: Insect Apocalypse.” Words like “alarming,” “degradation,” and “diminishment” haunted the screen.

What was the buzz?

Habitat loss, insecticides and the use of chemicals, climate change, and natural enemies are causing the bees to die. Delaney presented data including graphs and statistics that all said the same thing – insects are disappearing.

Entomologists, or scientists who study insects, are aware that climate change as well as construction and  development are bad news for the biodiversity of our world. The more people plant monocultural (a single species) grass lawns, fill meadows with cement, and tear down forests for developments, the less natural spaces are left for the critters.

“We don’t share well,” said Delaney. Humans are asking too much of the environment; we’re dominating the natural world, and our choices are negatively affecting the insect kingdom.

Ultimately, she wants us to realize that we, humans, are a part of natural world, and we will ultimately be affected, too.

Bees as well as other insects are “vital pollinators and recyclers of ecosystems and the base of food webs everywhere,” wrote Brooke Jarvis for the New York Times. Jarvis also reported that insects are decreasing in population at alarming rates.

For example, the rusty-patched bumblebee dropped by 87 percent over the past 20 years.

Near the end of the night, Lauren Anderson reminded us that we cannot predict the future. But, we can work everyday to strengthen the link between the natural environment and the changing, technological world.

Be “the angels of agriculture,” she told us – a common thread throughout the evening’s event.

“100 years ago, a candle was lit. And we’re keeping that candle alive,” said Jeremy Barnes, a retired educator who has been writing and teaching beekeeping techniques for over 15 years.

History matters to Barnes, who maintains the original meeting minutes from 1919.

After a slideshow of beekeeping from 100 years ago, Dave Papke, Chairman of the Centennial Celebration Committee, proved that beekeeping hasn’t changed much.

In fact, one element of beekeeping is inclusion. Papke made sure to highlight the participation of women in almost all the photographs we have of twentieth century beekeeping.

The level of formalized education doesn’t make a good beekeeper.

“So, we have the full range, from Ph.D.’s to self-employed artisans,” Papke said.

What does matter, Jeremy told me, is how someone interacts with his or her bees.

The zen of beekeeping

Barnes believes the most important thing people should know about bees if this. Unlike wasps and hornets, including yellow jackets, honey bees are defensive. This they are not aggressive – they do not want to sting anyone.

However, they will protect their home if something, or someone, attacked their home. “As would I,” said Jeremy. “Hence, the zen of beekeeping, which involves a way to manage bees which they perceive as non-threatening.”

While at the celebration, I chatted with Jena Smolko and Brian McGinnis of southern York County. Bees can sense the pheromones in humans, they told me. They can tell when humans get worked up, and this agitates them causing them to sting more.

More about the zen of beekeeping can be read here.

Today, the YCBA has grown to almost 240 registered beekeepers in York County with just under 2,000 hives.

During York Restaurant Week in May, 12 York eateries will feature York County Beekeeper’s Association honey on their menus.

In September, about ten members from York will be representing YCBA at the 46th Apimondia International Apicultural Congress in Montréal.

During the Made in America Week, Nixon Park and Brown’s Orchards will feature honey bee demonstrations.

Lastly, in August the beekeepers will open their apiaries, or collections of bee hives, to the public.

Papke said many factors contribute to the extremely complex problem and that is why scientists are struggling to find a solution. “Yes,” Papke said, “her comments were cogent and alarming for all of us. Why aren’t people talking about it? Many are, more are waking up, but the vast majority of humanity is either ignorant or complacent.”

While the signs are alarming – insect populations are dropping dramatically – they are also just signs for now. However, that’s not an excuse to ignore the sirens. We should be on the lookout for native plants such as milkweed that are good for the local ecology, buy local honey, or better yet: join the YCBA and get bees.

For now, I have to figure out why a raccoon was on my porch during the day. I feel bad, but I shot the raccoon. Not because I wanted it dead – it was just trying to eat dinner. But, raccoons are nocturnal and the animal was probably hunting during the day because it was sick. Part of land stewardship is making sure diseases don’t spread.

This summer, I’ll also do my part in growing black-eyed susans, mint, and coneflowers that are good for bees.

I’ll leave you with these jokes from Andersen:

What’s the best part of the human relationship?

Why do bees hum?

They forgot the words.

What do you call a bee who is having a bad hair day?

2 comments on “Preventing the ‘insect apocalypse’: 100 years of beekeeping in York County”