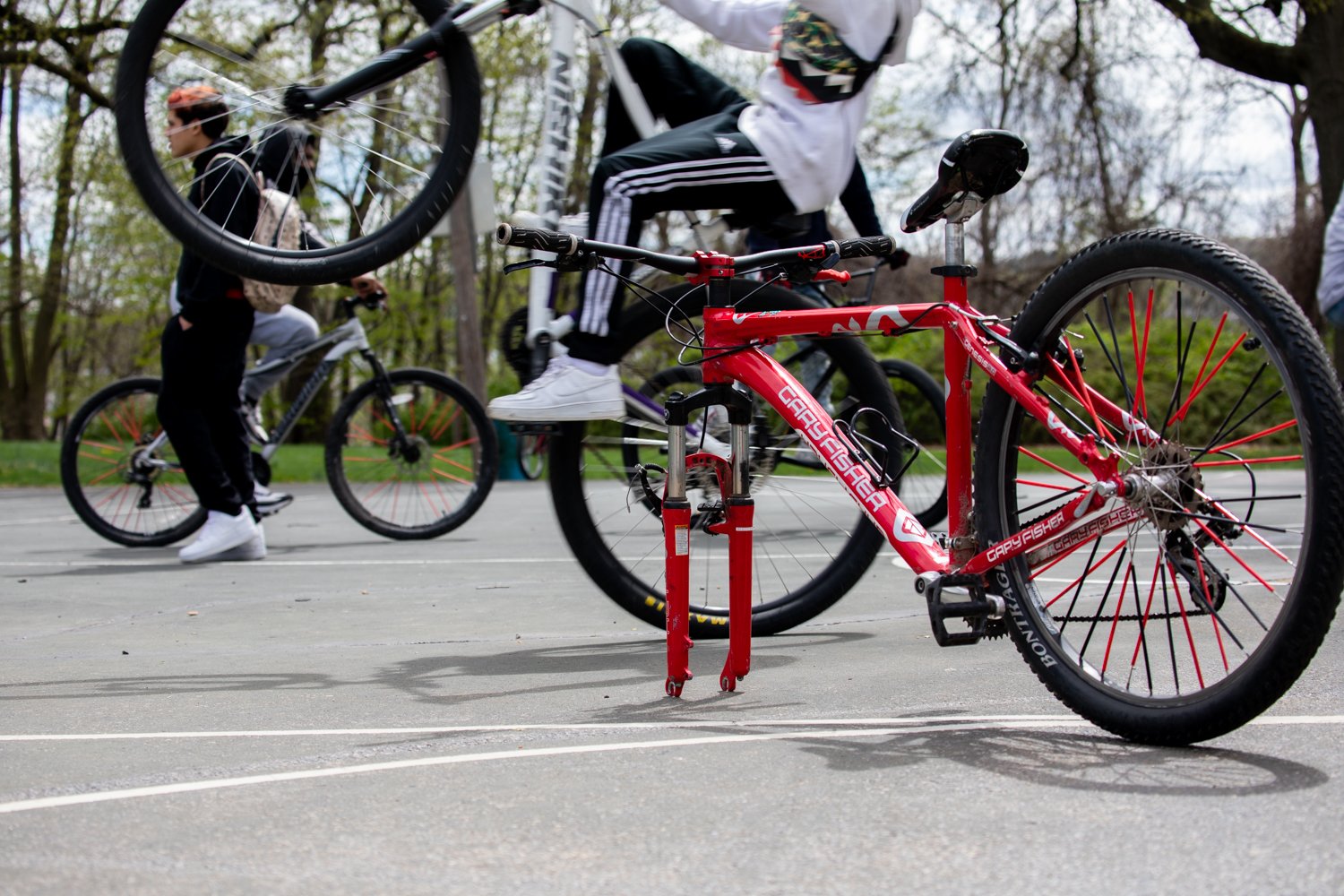 “He’s a criminal!” he repeats.

At first, I’m struck by his blunt hostility. Then, I can see why he’s so upset. Young adults on unregistered motorized vehicles put their lives at risk and endanger the safety of other drivers sharing the road.

As someone who grew up outside of the city (Yoe Borough), I didn’t understand why people would ride their dirt bikes through York, jeopardizing their lives and mine. Since then, new information has lead me to change my mind.

An article in The Guardian covers the rise of dirt bike riding in Baltimore — a mere 50 miles from York. A man the author interviewed reports, “Living in the hood was crazy…junkies, drugs, killing, shooting. It was nothing positive. You could easily not care. Dirt bikes saved my life, and gave me a reason to want to live and go on.”

That same article explains how urban dirt bike riding is most prominent in lower-income, African American communities across the United States. The limited recreational facilities in these areas mean people look for other ways to entertain themselves.

I teach a high school class at a residential school. I often share my research with my students, showing them a video produced by the New York Times on the 12 O’Clock Boys — people who ride their bicycles, dirt bikes, and four-wheelers through the city, usually performing wheelies (hence, pointing their wheels near 12 o’clock).

One of my students, Justin, returns to Baltimore each summer to spend time with his family. Justin, a 15-year-old Black youth, sits up front and participates everyday in class. Sometimes he struggles to submit work, but he is always respectful. Politely, he raises his hand to answer questions and helps his peers when they struggle.

I wasn’t expecting this.

I ask him, “Don’t you feel like it’s dangerous?”

He responds, “No, I’m with my brothers. We ride because it’s a place we belong and feel connected.”

He goes on to explain how they do take risks, and that he wishes he didn’t have to ride next to automobiles. But he doesn’t have any other options. He lives in a lower-income section of town and doesn’t have the money to go to a track. Justin acknowledges that some of his fellow riders are disrespectful to law enforcement.

As someone who is looking to go into law and public safety, he disapproves of their blatant disregard for police officers. Because of this, he’s on the fence about his career. Becoming a representative of the law makes him “a traitor,” he explains. His friends and family would consider him disloyal if he chooses that path in life. He’s stuck between his passion and his family — a choice no one should have to make.

I’m awestruck. Here in my class is a young man who the Uber driver would label “criminal.” I reach out to a friend who is a Baltimore city police sergeant. Because his office strictly monitors interactions with the media, I’ll call him Jake. Jake was born in Baltimore and choose the police force as his career. His family like Justin’s, taunted him about “joining the other side.”  However, Jake tells me that Justin would be setting himself up for success. After 13 years on the force, he is the one with a good credit score, a house, and a car that’s paid off. Jake loves his family, but also saw law as a mode of upward social mobility.

Unlike the Uber driver, Jake calls dirt bike riders “a nuisance.” He tells me, “It’s a misdemeanor and a pain, but not the worst thing that could happen.” He explains how the riders aren’t just letting off steam, as the New York Times video makes it seem. “It’s not just one person. It’s hundreds of them. And [the dirt bikes are] almost always stolen. That’s the problem.”

He continues, “Yeah, it’s an outlet. Teenagers are doing something that looks cool and gets them attention.” But, he says, it becomes an issue when he can’t pursue them because of Baltimore’s No Chase policy (the police cannot go after dirt bikers out of fear that they may hurt themselves while fleeing).

“When they are holding a weapon or drugs, they can get away quick,” he says.

Jake understands the need for escape, but not when people exploit the policy to sell drugs or perpetuate violence.

Jake considers the 12 O’Clock Boys’ offenses as “not that serious,” but he wishes there were healthier outlets where young people, like Justin, could find a team. The bicycle team in York is an example.

Brandt Kingsley from York County saw the rise of youngsters taking to the streets. He founded Pedal 4 Peace to give kids a healthy and safe place to ride. With 140 youths, ages 11 to 19, they are one of the largest organizations in the city serving our young adults.

Kingsley doesn’t condone breaking the law, and he doesn’t want his kids to practice dangerous riding habits like the 12 O’Clock Boys. Instead, he offers them a place to ride that’s off the streets. “You don’t know what they went through that day,” he tells me.

While riding down Reservoir Hill by York College, one of the youth’s nicknamed “Peanut” felt the fear of the steep descent. Looking down can terrorize anyone on a bike, let alone a teenager. For five minutes, Kingsley coached him. “You can do this Bro,” he said, while kneeling beside Peanut. “I’ll show you.” Kingsley demonstrates the method of snaking back and forth across the hill. The diagonal lines means a lesser angle; plus, the rider isn’t forced to focus on the monumental size of the large hill.

Peanut followed his trail, but jumped off crying.

One of the lessons Kingsley and others teach their riders is the importance of grit. They aren’t allowed to give up when they know they can accomplish the feat. Kingsley coached him, exercising patience and persistence, until Peanut reached the bottom. He lunged from the bike shouting, “I completed my dream!”

“Life’s like that sometimes,” Kingsley says. “You just have to send it.”

Kingsley finds mental blocks like these stunt his kids frequently. They feel overwhelmed by dysfunction in the family or struggles in school. Teenage angst is felt by most young adults, but especially for lower-income students.

Riding bikes provides that escape. The drama floods the senses. Like Peanut, riding is an exercise of the body, but also of the mind. It takes discipline and courage to ride downhill like that.

Kingsley funds Pedal 4 Peace via personal contributions and community funds. He learned the skills necessary for an up-start like this from his time as a Vice President of marketing at an investment firm. But, he resigned. He felt the values didn’t align with his own. They focused too much on the bottom line, he felt. The stress affected his health too, causing him to gain weight and lose his hair. So he left, searching for a higher purpose.

He found his inspiration in an unsuspecting place — a pawn shop. He purchased a mountain bike and started riding.

“I remember when four miles used to feel long,” he tells me.

As an amateur in 2017, he rode from York to Ocean City as a Ride against Violence. He started at the rail trail, followed by roads and side streets. His 30-hour pilgrimage inspired people that grew into Pedal 4 Peace.

Now, he works as the executive director for Salem Square Community Association and spends most of his free time at the shop.

While researching newspapers in York County, I found that using bicycles as a form of transportation dramatically increased between World War I and the 1950s. A 1922 article in The York Dispatch reads, “‘Ride a Bicycle!’ —Go where you want to go, when you want to go—for work or for fun.”

Marketed as an opportunity for mobility, bicycles unleashed many Americans because of their affordability and practicality.

They may have grown in popularity after World War I, but bikes were invented a century before. A 2016 journal article in Social History explains how one of the first bicycle attempts occurred in Britain during the 1820s. Karl von Drais’ “running-machine” or the “dandy-horse” thrived for a few years, but quickly failed due to poor engineering.

During the 1950s, the automobile replaced the bike as more and more Americans moved to the suburbs. The bicycle diminished into a recreational hobby for the kids.

Today, however, it’s celebrated as a clean and affordable method of transportation. It alleviates parking congestion, cuts down on pollution and noise, and is considered by many as more democratic with its social inclusion.

For Kingsley and the riders of Pedal 4 Peace, bicycles symbolize freedom and accountability. Members of the community will send him pictures of young men riding who “swerve cars,” meaning coming straight on in traffic. If one of the youths in his program is identified, they don’t ride. “If one messes up, they all don’t ride,” he says. This means they keep each other in check, instead of a top-down authority telling them what they can and cannot do.

Instead of punishing negative behavior, he shows them what can happen when they stay out of trouble. They attend summer camp, go camping, and visit downhill mountain biking trails.

“People send the difficult ones to me,” he says. “There’s a certain level of danger that helps that child. Everyone is hardcore until you take him camping and it’s night time,” Kingsley explains. “This one young man peed in the tent. We were like ‘just open the door dude! You could have just unzipped!’ The next night we gave him a bottle.”

Where politics divides, riding binds. A YRK Magazine article explains how the organization stops violence by bringing Yorkers together.

The organization builds character through “Urbanomics” — teaching urban entrepreneurism and business through the bike shop. The riders run the cash register, design logos for stickers and branding, socialize on Facebook, maintenance bikes, and talk to customers. “There’s no spoon feeding here,” he says.

They’ll take bikes others discard, and rebuild them. If he doesn’t know how to do something, Kingsley will look up solutions on YouTube to learn together. This demonstrates an attitude of “I can do this,” so the riders can see they are capable of solving their own problems.

In 2020, they clocked over 840 hours of community service at the Food Bank and trash clean-ups, demonstrating that they tackle local issues in addition to personal conquests.

What Kingsley would tell the Uber driver

I asked Kingsley what he wants other motorists to know. “Let them ride,” he tells me. “They will get out of your way soon. Also, respect the bike lane.”

For many York residents, a bicycle is the only form of transportation they can afford. In 2018, 210 York County residents used a bicycle as their only commuting vehicle to work.

Accidents happen, and sometimes the riders bust out their teeth. “That happens the moment you let fear in,” he says. The lesson? Face fears and persist.

“Whatever a man can see and believe in,” Kingsley says, “he can achieve.” He believes if he can influence one rider, that can change their household. That one household can change one York City block. And that block can influence the community.

Harrisburg’s Art in the Wild: An eco-friendly fantasy world 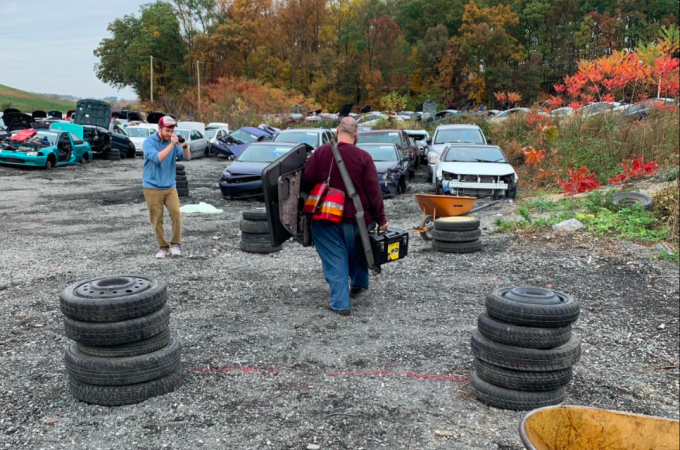