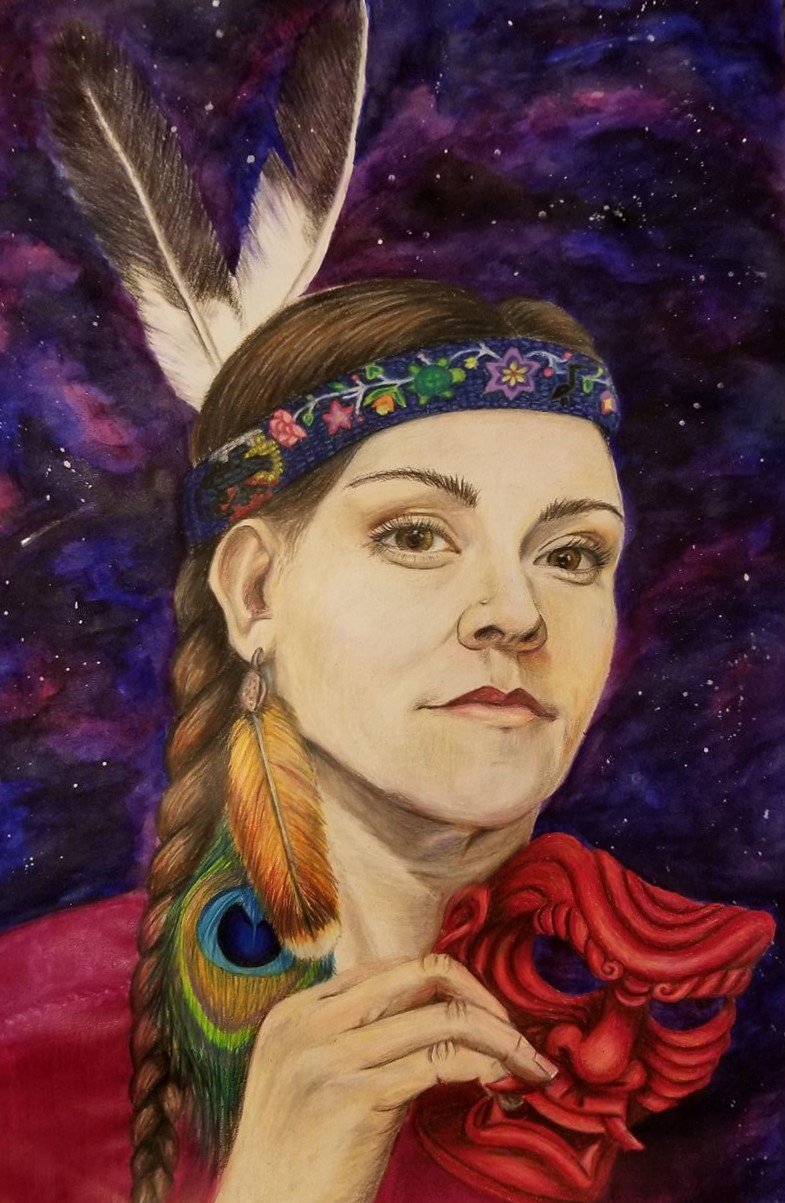 After writing “Harrisburg’s Art in the Wild: An eco-friendly fantasy world,” I want to know more about nature’s influence on art.

My family took me to Indian Steps Museum in Airville as a kid, my first exposure to Native American culture. But I haven’t developed that interest  until now. So, I start my dive into local, indigenous art.

As a last resort, I turn to the power of social media, posting an all-call on Facebook. In true York County fashion, my friends connect me with four American Indian artists.

Ruby Olson moved to York County in the 1960s from North Carolina. Newly married, she birthed three children, including her youngest named Kim (Olson Richardson). Ruby made sure that her babies would know and practice their Haliwa-Saponi roots. Since Hollister, North Carolina remained their tribal home, each April they’d pilgrimage to the annual powwow.

There, Kim and her siblings would celebrate their heritage by dancing. The Fancy Shawl dance, for instance, takes athleticism and is meant to imitate the elegant, swooping wings of a butterfly opening from the chrysalis. Kim also participated in the Jingle Dance from the Ojibwe people in which 365 cones are sewn into the dress to represent every day of the year.

On one annual trip to the powwow, Kim met Roger Richardson also of the Haliwa-Saponi tribe — her future husband.

“Living away, it’s kind of hard to keep involved,” Kim tells me, “but we have always been able to do that because it’s important to us.”

Native Americans are commonly depicted with headdresses. However, “Our people didn’t wear war bonnets,” Kim says. “So I started a line of t-shirts that showcase Eastern Woodland Natives called Moc70.”

Since they couldn’t hold powwows, COVID tremendously affected the tribe’s ability to celebrate their culture. But this summer will be different. Powwows are scheduled, including THIS LIST  of upcoming events in PA.

Raine Dawn Valentine, from the Anishinaabe People, is a part of the Turtle Mountain Chippewa tribe still located in North Dakota. Her mother attended a boarding school from the age of six to graduation at age 16.

“She was not allowed to know or learn our Native traditions,” Raine tells me. “She lived in the time where natives were being indoctrinated into the American culture.” (Jim McClure and I will explore assimilation more in an upcoming Witnessing York article.)

It wasn’t until adulthood that Raine began to learn and connect deeper with her heritage. She takes trips back to her family in North Dakota to learn all she can. “My culture influences my everyday life and teaching,” Raine says. “I am always connecting to our seven teachings, and sharing traditions with others.”

To Raine, art and spirituality are deeply united. “Art also connects us deeper with nature, which brings us back to our center and grounds us in a meditative state which opens us up to hearing that divine higher self,” she says.

Raine has been teaching art for 13 years at Ridgely Middle School in Baltimore County and adjuncts at Notre Dame of Maryland University where she instructs graduate students on methods on teaching art in the secondary classroom. There, she infuses her Native American customs into her lessons.

“Being a teacher means I get to help our youth to see themselves and know themselves better,” Raine says. “Art has created our world, and our students need to know that they have the power to create the world how they see it from their own imaginations.”

Like Raine Dawn, Jess McPherson also creates art. However, she finds herself most engaged in bead and thread jewelry making.

One exhibit called “Homesick” shows the connection between Jess, her cultures (She is also Pennsylvania German), and the land. Jess took dried grasses, along with her art partner Donna Sylvester, turning them and tethering them together. As they suspended the piece in the air, the grasses “began to bind themselves to the live grass under our feet,” Jess tells me. “Out of this connection…We began to see them as hatching or birth giving. For me they are also a little like empty cocoons.”

As the artists assembled and lived with their installation, they noticed subtle movements. “In some pieces their ropes reached down and gently caressed the floor, looking for the ground as they did when they connected themselves to the live grasses beneath our feet that day.”

Their exhibit was on display along the river at Lowercase Gallery in Wrightsville, PA, where community members brought their own pieces to incorporate into their artwork, either weaving them in or leaving them at the base as offerings.

Here are some of her involvements and ways you can learn more about local initiatives:

Jack and Kim are kin. They both come from the Haliwa-Saponi People from North Carolina. When their children were young, they along with others started a culture group. They wanted to involve their children in the dances, including the powwow they started at Indian Steps.

But instead of t-shirts, Jack builds drums.

First, he attains leather — elk, cow, deer, or buffalo. This past year he tanned his own buckskin hide, but he won’t do that again. “It’s a bit of work, so I don’t think I want to do it anymore.”

Next he builds the drum’s cylinder using western cedar. “It’s light weight,” he says, which makes it easier for the drummers to transport. A couple coats of polyurethane ensures water won’t damage the wood.

Using strips of leather, Jack pulls the hide tight across the cedar cylinder, but not too tight. If there isn’t enough flex in the drum’s face, that beautiful, deep sound won’t reverberate. Finally, he assembles the beater so the musician will have their tool.

Three from different tribes, and they all express themselves in different art forms.

A misconception is that “Native American culture” is one, monolithic experience. It’s not. Hundreds of Indian Nations thrived in the United States before colonization.

After Europeans settled in America, many customs were lost. Yet, many American Indians and their descendants keep the traditions alive. And just like the plethora of practices of their ancestors, contemporary artists range in a broad spectrum of indigenous culture.

Kim, Raine Dawn, Jess, and Jack all explore their identity, their history, and their culture through art. “The importance of each person’s role in the arts,” Jess writes, “is easily demonstrable and an incredible tool in teaching people that they are important, that their thoughts and experiences matter.”