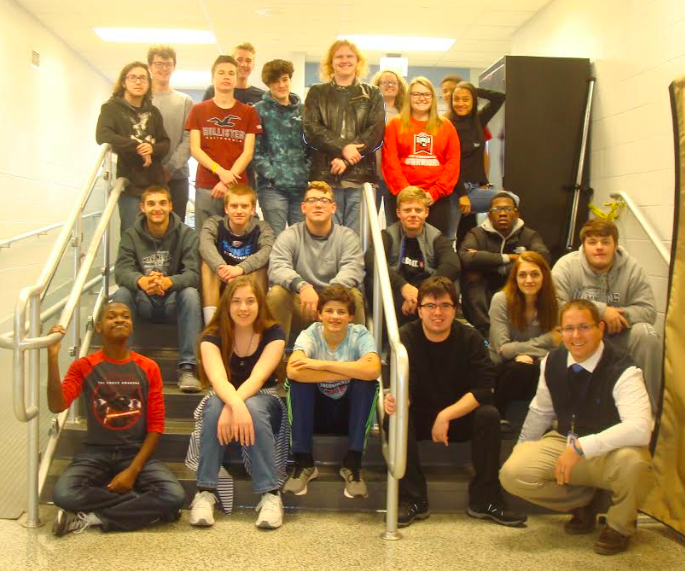 When did you realize you loved learning about local history? I had three moments where I became aware of my fascination of York County.

Since I graduated from Dallastown in 2008, Melhorn has continued teaching local history. His 0.5 credit course is offered all three trimesters. That means close to 75 students took the course during the 2018-2019 school year.

Melhorn’s curriculum spans from the time of the Iroquois Confederacy to present day, incorporating information about the Susquehannocks, Hex Hollow murder, Articles of Confederation, William Goodridge, and Special Olympians such as Loretta Claiborne. Furthermore, Melhorn incorporates our industrial history including the manufacturing of cars, cigars, and war tanks. It’s important to note that York’s history is very local but also ties into national level events.

As a fellow Social Studies teacher, I wondered what awesome projects Melhorn created. This came not only from sheer curiosity, but also so I could incorporate his great ideas into my own curriculum (My teacher readers know – we beg, borrow, and steal as many cool lesson ideas we can!) So I emailed him to see what he was up to in his local history class nowadays.

Most importantly, the students conducted their own difficult research. “The material was not simply sitting in a book or website waiting for them,” Melhorn told me during an interview. Often, teachers pull articles, websites, or books for their students to peruse. But, when you can get a student to dig deep, fostering their curiosity, that’s when life-long learners are born.

They checked the regimental rolls, detailed battlefield maps, and the history of a few battles to try to find more specific  details. Melhorn said, “Sure, we looked at some books and sites on the regiments, but many regiments do not have a book or site dedicated to them.  I posed the project in a way that… if a site doesn’t exist, then let’s make one.”

The website creation incorporated 21st-century skills that would help them in our technocentric world.

What did the students say about project?

“This class was one of the best classes I have had,” Charles Melbourne thinks. “I know a lot more about where I live now than I ever did in the past.”

Brynn Long thinks in two successive sentences, “I enjoyed that we got to learn about how involved York was with being willing to fight in war and raising money for wars.  The class teaches you about all of the history and makes it easier to appreciate York.”

“I love to learn about the importance of where I live,” says Cooper Webber. “It is so cool to know about what York has done for our country!”

Finally, Jack Shuchart said, “From all of that, we are still able to call York County home.”

There are some common themes here. But the most important, I believe, is pride and appreciation. Recognizing the significance of where we live – seeing how special it is – will germinate the seeds of local history interest in the next generation.

While Melhorn doesn’t think anyone in the room turned into the next York-based Civil War historian Scott Mingus, the students did create something to expose a part of York’s history that has fallen through the cracks.

York’s involvement in the Civil War

Here is what Melhorn believes are the major takeaways of York’s Civil War history: “A couple of years ago, I wanted to alter the Local History class and start to teach it from a thematic perspective.  What I kept on coming across was how York soldiers and York County people were involved in every major war and nearly every major battle. Even the people that couldn’t fight gave tons of money to the government to support the war by buying victory bonds (in World War I and II) or by taking pride in their work making wartime material for companies involved in the York Plan.”

Melhorn mentions several of York’s involvements in war such as the Revolutionary War when York soldiers marched 414 miles to Boston to support our allies after the Battle of Bunker Hill.  Additionally, he points out, York also fought in the Battle of Fort Washington in New York, in Trenton, Princeton, and nearly every major Revolutionary War Battle.

Melhorn sums it up well, “We signed up, we fought, we sacrificed, and leaders praised us for our commitment and our skill.  We were there for our country always, and we deserve to be proud of that. I want the students to leave the class with a sincere pride in their home, and this builds upon that goal. It’s York County history,” Melhorn states, “the focus should be on appreciation, not stress.”

Why offer courses such as local history?

Every year, I receive notes from three to four students that say something along the lines of, “Before this class, I HATED history. You made it fun and now social studies is one of my favorite subjects!” Comments like this light up my world. I was able to inspire young adults half my age to appreciate how we, as a human race, got to where we are now. Giving students the option to learn specific lessons about specific places they can visit removes the compartmentalized blinders that classrooms are notorious for both physically and metaphorically constructing.

Just like my school, Dallastown values student choice in their schedules, Melhorn told me. The point is to offer options so students want to learn the content taught in the course. As most teachers know, when students can exercise the power of choice, a new sense of ownership emerges unparallel to an assigned topic chosen by the teacher.

After Mr. Melhorn’s class, I couldn’t help but want to know more about York’s history. Since then, I’ve continued to foster my love of history but I have his class to thank for planting that curiosity seed during my days at Dallastown.