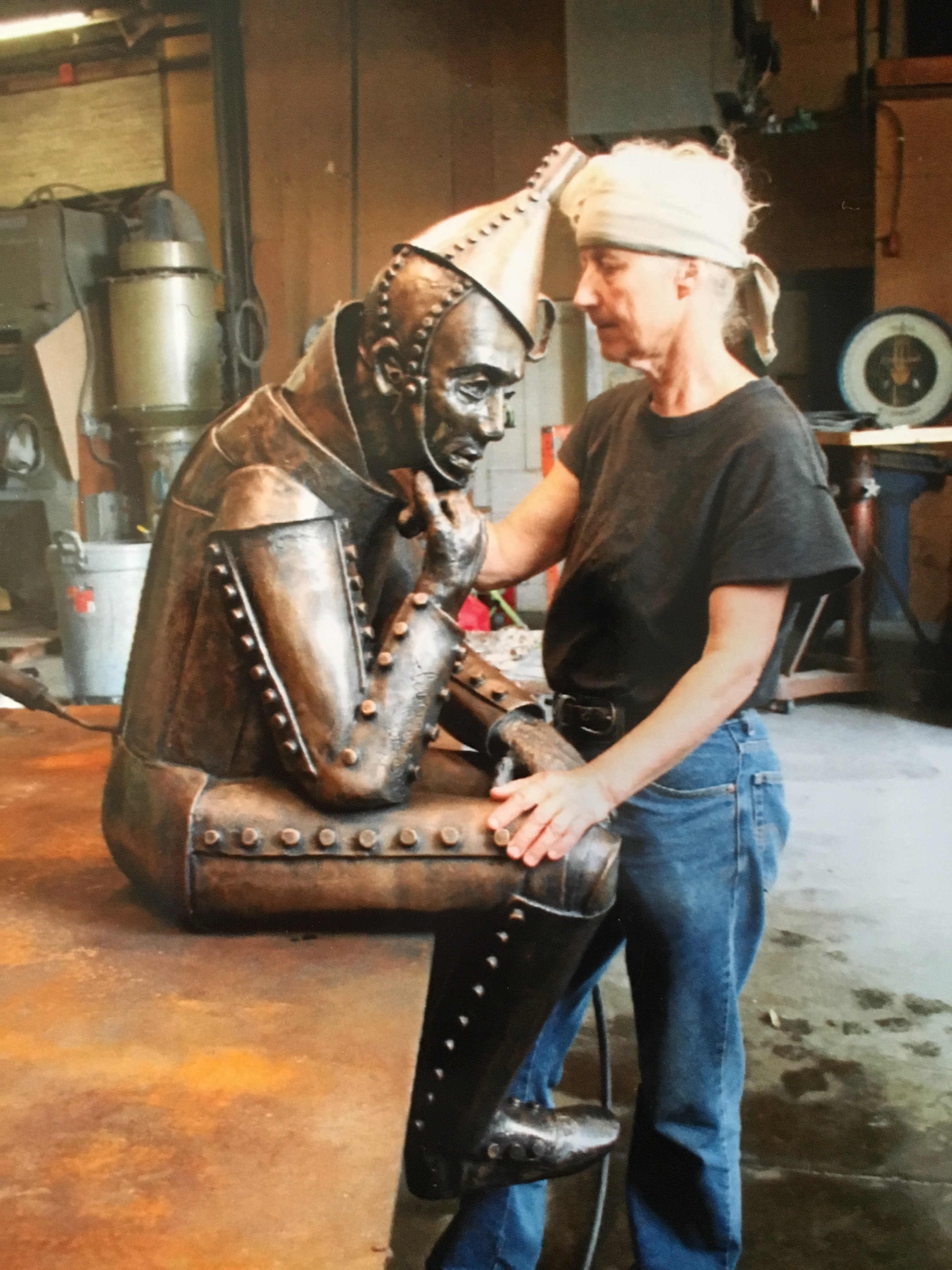 Lorann Jacobs, a local artist, makes beautiful sculptures in the basement of her Dallastown home.

She says working on her art helps her deal with feelings of anxiety and anger.

“I’d just go make a piece of art,” she confessed to me. “It’s more positive than feeling sorry for yourself.”

You may not recognize her name, but you would know her artwork. She designed and built the Vietnam memorial at the York Expo Center Fairgrounds, the eagle and flag in York City’s square, Brooks Robinson at the York Revolution Stadium, Lafayette holding up his glass at the Plough Tavern, and “The Workers of York” at the Agricultural and Industrial Museum, among others.

Fun Fact: Originally, no woman was included in the plans for “The Workers of York” sculpture, but Jacobs added it to be more inclusive.

Her most recognizable sculpture is The Tinker located in front of the Judicial Center. The Tinker is a collaborative piece she constructed with the help of Patrick Sells, another local artist, who built the gear base.

She thinks this sculpture has brought the most attention to her work because it’s photogenic. More importantly, it reflects the spirit of Yorkers – industrious, pioneering, and thoughtfully planning for the future.

How Jacobs got her start in art

Jacobs was born and raised on Cherry Lane in Dallastown. She still lives on that street, only now she’s one house down from her childhood home, which is where her 97-year-old father still lives.

Her father, Leonard Giknis, immersed his kids in art via his own oil paintings. His piece on the Susquehanna River earned him best in show in 2013 at the York Art Association’s annual exhibit.

After high school, Jacobs went to the Maryland Institute of Art for one year in the 1960s. However, she soon dropped out of college. Formalized education was not for her; so, she taught herself.

Jacobs is what you could call a “visionary.” This means she is untrained by an institution yet dedicated years of hard work to teaching herself how to build beauty from raw materials. I look up to Jacobs’ “can-do” attitude and her ability to see what others cannot see.

Before the 1980s, people didn’t even know what sculpture was, Jacobs explained to me. Furthermore, a woman working with metal was unheard of in art circles. Art was a man’s world, and it was hard for women to get credit and attention for their skills.

Thankfully, Jacobs broke through the glass ceiling and became one of the few women sculptors to use wax. She’s a role model for me; oh, and also my grandmother.

I know you’re wondering with such a gifted family like this, where can my art be found in York? Sadly to say, their talent diluted by the time I was born – no painting or sculpting for me, my art form is writing.

Motivated by the age of feminism in the 1960s, Jacobs took a non-traditional approach to art. It took many hours of visiting a weld shop to make and design things. Unsurprisingly, Jacobs decided to learn to weld herself, thereby relinquishing any dependency on others.

In fact, Jacobs’ love for art spread to her husband, Joe Jacobs. At first, he simply helped her transport her bronze sculptures to shows. Eventually, he wanted to be an artist, too. “Art shows are fun,” he told me. Lorann considers Joe her “protege” and together they show their art all over the east coast. His speciality is beautiful water colors with a focus on Pennsylvania culture and animals.

Together, they enjoy their work because “it’s therapy.” They revealed to me. “It’s a great way to express yourself.”

Today, the art world is very competitive. Young artists go to shows but only a few make it to the very top.

How does Lorann Jacobs stay relevant? She chooses a unique form of sculpture construction – wax instead of clay to build a bronze. Luckily for me, she gave me the rundown on how she approaches a project.

First, Jacobs decides on what she wants to build. Using pictures for inspiration, she begins constructing an image in her head. When I inquired how she decides on what to create, she said a lot of her work is imagined on speculation. She makes things because she enjoys doing it, but also because she thinks it will sell. Right now, skeletons and fossils are the new vogue.

After she has an idea of what she wants to create, Jacobs melts a red, pattern wax made just for sculptors. She purchases this from a foundry located in Chester, Pennsylvania. After the wax is warm, she models with the sticky substance like she would clay.

Every time she starts working, she picks one segment – maybe a hand, leg, or wheel. Piece-by-piece, she puts the whole structure together. If something isn’t right, she cuts it out and changes it.

How does she cut it out? With a torch and a hot knife, she skillfully removes the unwanted section. Since the wax is about 170 degrees, Jacobs’ work is quite dangerous.  Jacobs has even picked up a tool that was in a flame, forgetting it was hot which resulted in a burn.

“Hot wax is like napalm – get it on your skin and you can’t get it off.”

Oftentimes, artists do not know when to consider their art “complete.” Satisfaction rarely comes and she habitually believes she can do better. However, her advice was to never get bogged down on one project. “Start over on the next project,” she advised. “People have trouble knowing when they are finished. They don’t know when to quite and can mess it up.”

Sometimes, I feel the same way when writing these blog posts. I think, “I could add one more picture!” Or, “That’s not quite the way I want to explain that.” However, at some point we have to realize our work is the best that it’s going to be and move on to another project.

When Jacobs finally considers the wax sculpture finished, she loads it into the back of her black Jeep Wrangler. Carefully, she positions the delicate sculpture so no potholes damage her work. With lots of air cushions and straps around it, Jacobs cautiously delivers her art to the foundry where she engineers the pieces into a finished sculpture.

The foundry makes a cast of the wax figure and pours molten-hot bronze into the mold. Once it cools, the sculpture is finalized into a piece of artwork that will last centuries.

Jacobs tells me this is what she loves about bronze sculptures – their permanence and outdoor capability. Standing up to the rain, sleet, and snow, her figures outlast any painting or mural.

Furthermore, anyone can gaze upon a bronze sculpture when it’s located in downtown York. Oftentimes, art can be shut up in a gallery where only a privileged few can appreciate it. What makes outdoor sculptures so special are their accessibility for an entire town to enjoy.

Today, being a female shouldn’t hinder our entrance into the art world. With the surge of studios, galleries, and street art springing up in York, we can all experience culture in a plethora of ways. Here are just a few of the art galleries: Marketview Arts, Small Star Art House, and King’s Courtyard Artists’ Collective.

So, if you’re feeling frustrated or angry, go make some art. Or, if you’re not the creative type, head downtown to one of the many great art galleries to spice up your imagination.

I will be revealing Jacobs’ most recent sculpture at the sold-out York History Storytellers: York County Illustrated event happening November 28 at the Belmont.