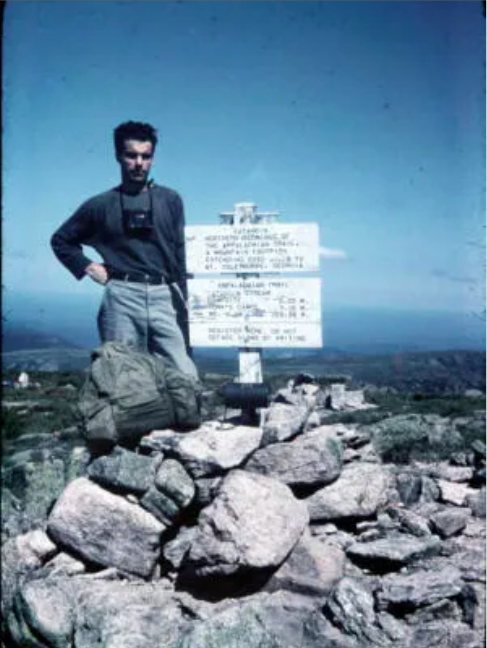 Shaffer ended his hike in Maine on the summit of Mount Katahdin. Long and alone, Shaffer's trip influenced the heyday of American hiking culture of the 1960s and 1970s. YDR Photo.
Posted by Jamie NoerpelApril 27, 2021May 19, 2021 Wandering in York CountyNo Comments

Earl Shaffer of York County, the first man to thru-hike the Appalachian Trail, called April the “true first month of the year.” The budding trees, blooming flowers, rolling waterfalls, and omission of bugs makes for happy times out in nature.

As an outdoors person, I want to usher in “the first month” by camping. A group of friends and I rent a primitive space at Little Buffalo State Park in Perry County’s Newport, about an hour north of York.

From Friday to Sunday, we cook on the campfire. We hike around Holman Lake, sleep in tents, and delight in each others’ company.

First printed privately by the author in 1981, Earl Shaffer documented his pioneering hike along the AT in Walking with Spring: The First Thru-Hike of the Appalachian Trail.

When I read his book, I can’t help but feel connected to his adventure through my own mountain experiences. My modest camping trip in no way compares to his 2,050 mile trek, comprising 124 days of backpacking from Georgia to Maine. But we still have fun comparing our convocation of spring with the famous York Countian’s historic expedition.

Shaffer called backpacking “rugged businesses.” He chose to keep his supplies to a minimum. His motto, “Carry as little as possible but choose that little with care,” echoed in my head as we packed.

The few times I went backpacking, I carried as little as possible. A wise friend told me, “Ounces equal pounds, pounds equal pain” — something he learned from the military.

The luxury of our automobiles offers extravagance Shaffer would likely gawk at. We not only bring tents, but air mattresses, coolers filled with food, lanterns, cook stoves, chairs, and many other avarices. If we were backpacking, our haul would have resembled the scene in Aladdin when they enter the palace with carts of cascading riches, minus the dancing camels.

When Shaffer started his “Long Cruise,” as he called it, he lacked any type of commencement ceremony. He gazed at the sign marking the beginning of the trail, the wind beating against his back, and got moving.

For our trip, we kickstart the adventure with a happy sharing circle. One at a time, the five of us share what we’re grateful for. Our remarks of friendship and bonding bring a serene smile to my face. I am grateful for these people, my dear ones.

When it came to clothing, Shaffer opted for pants instead of shorts. The long fabric would stop snake bites, the sun, and poison ivy from harming the skin. “Bare legs,” he wrote, “are also an invitation to various insects, which are the bane of the woods travelers.”

In Harrisburg, Shaffer temporarily abandoned the trail to visit a shoe repair shop. He added an extra layer of elk hide, “one of the best leathers to withstand frequent wetting and drying,” as an extra layer to his sole.

Our crew, likewise, feels the dampness on our feet as we cross a creek. Yes, we could go the long way around to use the bridge, but what fun is that?

Shaffer aimed to hit 20 miles a day, 15 at an absolute minimum. We hike seven. Traversing through the woods takes just under four hours because we stop to admire the trout in the stream, pet passing dogs, and listen to the birds.

At one of his stops, Shaffer bought cheese, bread, matches, and a can of Vienna sausages.

Since we do not have to carry our food, save the quarter mile from the vehicles to the camp site, we eat like it’s Thanksgiving dinner. Friday night dinner consists of shrimp, pineapple, and peppers in tin foil on the fire. Breakfast Saturday morning gives us the energy for the day with eggs and sausage.

Saturday’s dinner proves the best meal of the entire trip: Venison fried on the open fire, baked potatoes with all the fixings, and bananas with chocolate and marshmallows smashed in the peel again melted on the fire.

When we finally tire for the night, we bed down in our tents complete with pillows, mattresses, and blankets.

During his journey, Shaffer also opted for tent sleeping. That is until he reached Pennsylvania, passing the trail called Pole Steeple to Holly Mountain. “It was there, one night in October,” Shaffer wrote, “that I first opened up a mountain spring and slept out under the moon and stars.” He had caught “Mountain Fever.”

He thought about his close proximity to York County, his home — a mere 20 miles from his trail. “There was no temptation now to head for home,” he wrote.

However, his first time regretting his adventure came during a rainstorm. He thought to himself, “I had to be crazy to start this ridgerunner marathon in the first place.” But he kept going.

While in Eckville, about 30 minutes northwest of Kutztown, he wrote, “Suddenly a violent thundergust roared out of the westward valley and I climbed the far far mountain in sloshy boots, soggy poncho, and drippy rain hat.” He even stopped to ring out his socks.

As it was for Shaffer, the same happens to us. Rain moves in on Saturday evening right as we put the venison on the grill.

Thankfully, my friends brought a pop-up canopy. We rush to assemble it, straight out of the packaging, before the falling water droplets soak all our supplies. The sprinkle holds off long enough for us to protect our gear. However, that night the rain pelts our tents, inevitably seeping in to drench our clothing laying on the floor.

“Perhaps this trip would be the answer”

Shaffer’s 1947 trip started as a way for him to find mental clarity.

He served in WWII along with his childhood friend, Walter Winemiller. As kids growing up in Shiloh, the pair spent days outside hunting, trapping, fishing, and scouting for arrowheads. They hiked along the creeks and Gifford Pinchot. Roundtop, “the highest and most impressive peak in York County,” he said, “was the first memorable mountain I ever climbed.”

After Winemiller died at Iwo Jima, Shaffer battled with depression.

“The loss of his childhood friend and hiking partner had a profound impact on Shaffer,” writes Silas Chamberlain, author of On the Trail: A History of American Hiking and local Yorker. Chamberlain quotes Shaffer’s diary: “Miss your voice, the touch of your hand. My buddy, my buddy. Your buddy misses you.”

“Those four and a half years of army service, more than half of it in combat areas of the Pacific, without furlough or even rest leave, had left me confused and depressed,” Shaffer wrote. “Perhaps this trip would be the answer.”

His niece, Nancy Shaffer Nafziger continues to operate the Earl Shaffer Foundation. She tells me, “As a family, we are most proud of his inspiration to young hikers to spend time in nature for mental and  emotional healing.”

In fear of comparing my relatively minor ordeals to Shaffer’s legitimate trauma, I still can relate. In one year I finished my doctorate, moved twice, educated teenagers during a pandemic, and underwent major life changes. This camping trip wouldn’t be the answer, but it helps provide some much-needed respite. Nature, I find, soothes the mental wrinkles caused by life’s stressors.

At the conclusion of his hike, Shaffer wrote this: “The Long Cruise was finished. Already it seemed like a vivid dream, through sunshine, shadow, and rain—Already I knew that many times I would want to go back again—On the cloud-high hills where the whole world lies below and far away….Beside me as I stood there, happy yet sad, was another weatherbeaten sign, on a post held by a heap of gathered stones.”

Like any good adventure, our camping trip comes to an end. We hug, parting ways and reminding each other to text when they arrive safely home. It has been a relaxing weekend — not at all like Shaffer’s strenuous hike, but just as fun. One with many more memories of trail blazing, creek crossing, and camp-fire cooking.