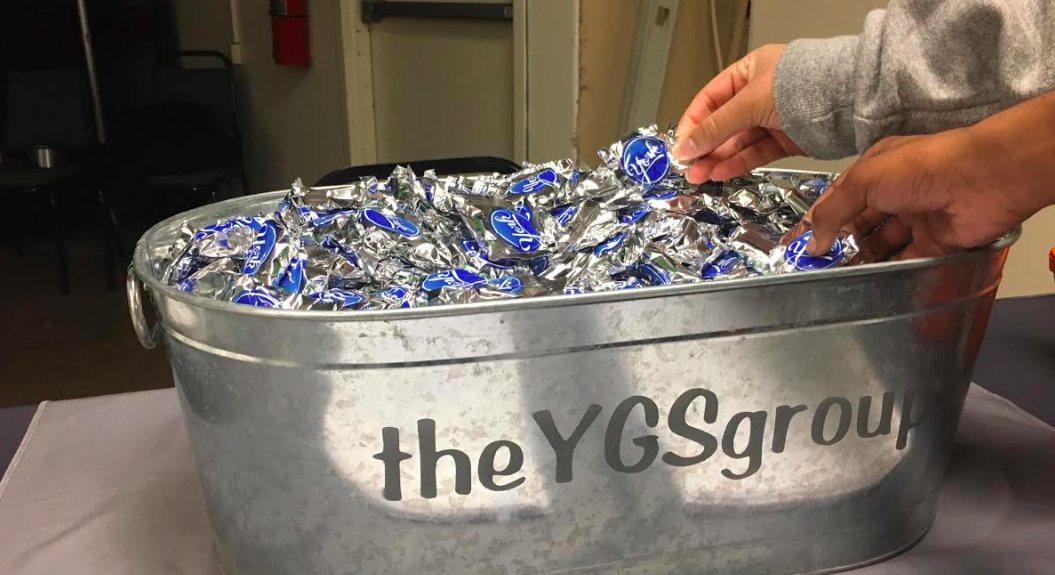 How a pair of earrings opened doors in York

DeAcosta asked me while pointing to my ears, “Do you know what they are?” He was surprised to see an antique and dead art form decorating my outfit.

Dangling from both ears were two vintage matrix brass letter molds that I purchased from a shop on Etsy. Used from the early 1900s until the 1970s, these instruments assisted the newspaper printing process.

We started chatting about the evolution of the printing press. I learned that DeAcosta is not only a distinguished graphic arts teacher, but also the president of the Susquehanna Litho Club.

According to its website, the organization operates to “create awareness of our (printing) industry throughout the five-county area” in addition to “promote continuing education through monthly programs events.”

Founded in 1959 by Jim Walsh, the manager of Seller Printing Company, the club fosters a relationship between education, businesses, high school students, and the community. In other words, they expose students to the world of work, specifically the graphic arts industry, so they can get a real world taste of a promising career.

The club also awards scholarships and grants for students and trains employees in the industry through fundraising and contributions of its 100-plus members.

In February, the club would hold an event at the YGS Group located in York. Of course, I asked if I could tag along. DeAcosta unhesitatingly agreed.

Located at 3650 W. Market St. in York, the company wasn’t difficult to find. Once I checked in and got my nametag, we waited for our tour guide, Rey Alvarado, a graphic designer, to show us around the facility.

More than 137 students, including more than 25 students from Milton Hershey School, attended the event.

Next, Alvarado took us to the planning department where they track jobs to make sure they meet deadlines. Sometimes, projects take precedence because they’re “hot jobs,” or projects that need to be ready for time sensitive events such as conferences.

Chris Somers, the prepress manager, took us to where the final product is checked for accuracy. These employees triple check the product to make sure it’s “press ready.”

Then, DeAcosta asked her a question that caused three students to drop their jaws, “So Chris, were you a stripper?”

Not surprisingly, the 15- and 16-year-olds in the room had a totally different interpretation of the word. After DeAcosta and I had a good chuckle, he explained the meaning of a “stripper” within the printing industry – it entailed the arranging and joining of film negatives in order to prepare printing plates. It turns out that yes, Somers had been at YGS since the “film days,” but she was a typesetter, not a stripper.

The rest of the tour consisted of wandering around the immense production line. Machines rattled and hissed. At one point, the temperature increased significantly, almost to 70 degrees, due to the large equipment printing thousands of sheets of paper, posters, pamphlets, and business cards.

One of the most interesting associates we met was James Williams. He charismatically told our kids about the value of work ethic: “The most important thing is to get the job done right and out on time.”

That’s a lesson they can take along with them to any career path they take.

We finished back in the registration room to hear from the CEO, Jim Kell, talk about the company.

A little information about YGS Group

Founded in 1953 as York Custom Comp, the business worked on typesetting by using wooden and metal blocks.

Few know this, but this York company was pivotal in font development. It was hired by textbook companies to develop fonts that would later influence all the different types of fonts we have today.

Jim Kell purchased the company in 2001. However, his investment in the business started when he was in high school. Describing himself as “just a kid from Spring Grove,” Kell started working for YGS, then known as York Custom Comp, cutting the grass and washing the owner’s car. “Really,” he told us during his presentation, “I did whatever they needed done.”

What prompted Kell to purchase the business was this: Printing jobs were shifting outside of the United States. The owners at the time were shutting down the company. They informed the employees, including Kell, that they should start looking for new jobs.

Kell didn’t want to move his kids again. So, he said, “I’ll take a shot at it.” Not having a lot of money saved, he said three things influenced his decision to become an owner:

As an owner, Kell takes his work home. I’m not talking about just late-night emails and paperwork, but the ideas and concerns that parade through his thoughts. “It’s a lot of pressure,” he told me. “I worry about my employees. You get to know them, their families. The employees become family.”

The art of lithography continues

Next week, I’ll discuss the history of printing including the potential death of this industry. However, for students in south-central Pennsylvania, the art of lithography continues. Milton Hershey School’s career and technical education program, including graphic arts, helps students focus on the best career pathway for their skills and interests.

DeAcosta’s program as well as Mindy Harmon, another graphic arts teacher who accompanied students on the YGS tour, cultivate a love of design in the classroom and connect them with actual careers through the Litho Club.

During the tour, I met a graphic arts teacher from the Baltimore County Public Schools named Jason Adelung.  He considered the Litho Club his savior. He almost dropped out of school at age 16, but the Litho Club motivated him to continue. Now, he perpetuates that inspiration with his students by taking them to events the Litho Club creates.

Unfortunately, just last week I lost one of my matrix earrings while walking to lunch. I hope someone finds and returns it. However, considering all that earring did for me – the connections, inspiration, and exposure to the printing industry – I’m happy knowing it’s out there, somewhere, to be found by another student or archaeologist one day. I hope it brings them as much joy it did me.