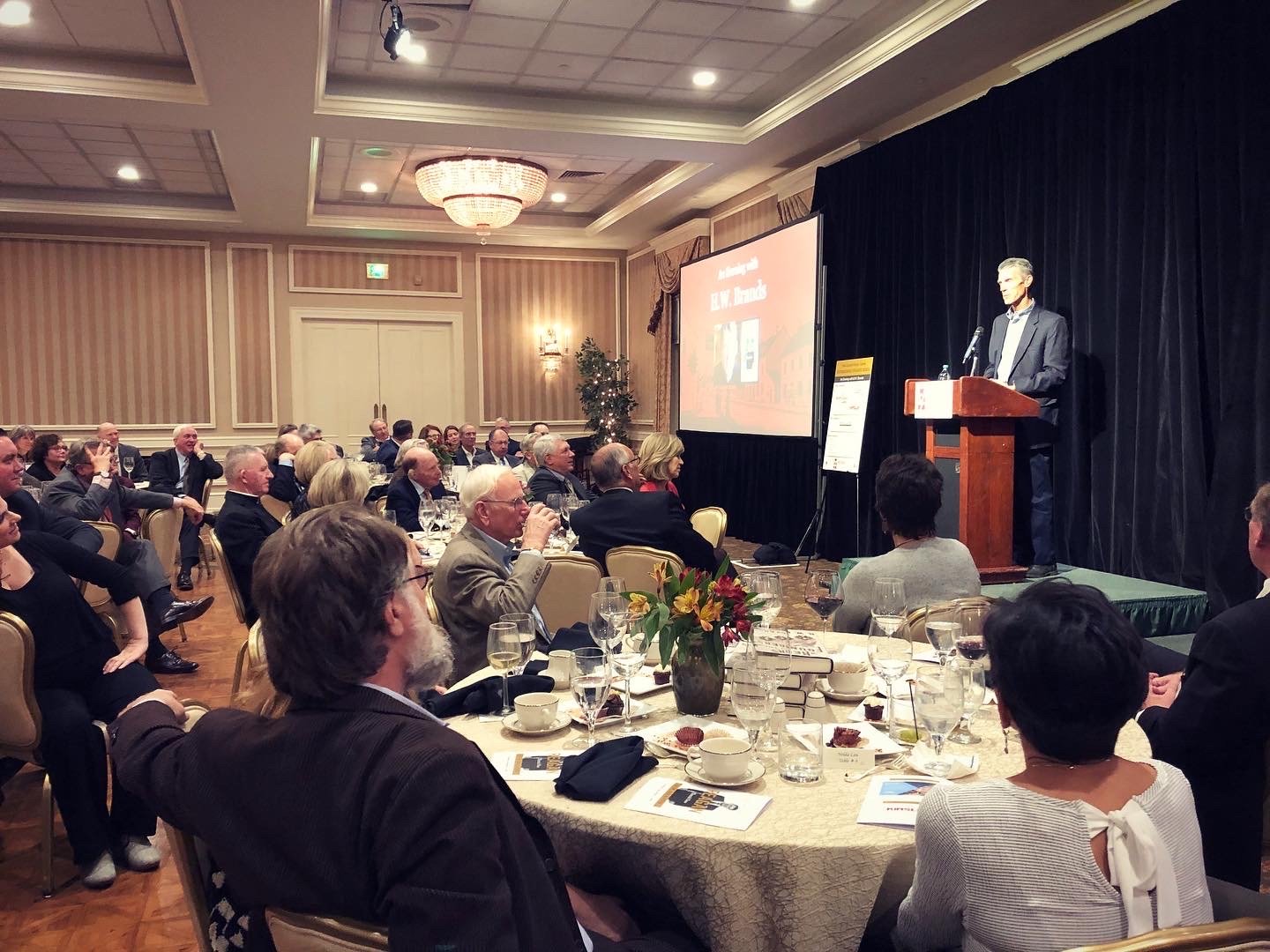 When I was a student at York College, Professor David Fyfe put together a walking tour in which I saw that the Susan Byrnes Center used to be a car dealership lot. But he didn’t just come right out and tell us, he told us to “look around. Notice things.”

At first, I was pissed! What does he expect of me? I’m not a PI.

But then I saw it – the glass out front that read “automobiles,” I realized the hidden treasures York has to offer.

On Nov. 7, Henry William Brands, H. W. Brands as he signs his books, presented on the legacy of Ronald Reagan.

Like Dr. Fyfe, he awakened that curiosity again. Brands told story after story with life lessons sprinkled in.

Brands earned his Ph. D. in history in 1985 and teaches at the University of Texas. Writing over 30 books on American history, most of them biographies, he’s fine-tuned his ability to build drama.  His most recent book, Reagan: The Life, contributed to the bulk of Brands’ material for the evening.

Here are some of my thoughts on lessons I learned about Reagan.

The child of an alcoholic

Ronald Reagan grew up with a father who drank. Not just a “I’ll pop open a Bud Light since it’s Saturday” drinker. But a full-fledged, find your dad passed-out in a snowbank kind of drinker. At 11 years old, Brands told us, young Reagan contemplated leaving his dad in the snow. However, his moral character told him to do the right thing. He awakened his father and ushered him inside.

The family had moved five times before Reagan turned eight years old because his father struggled to maintain a job. Instead of a happy time, Christmas meant lonely nights and angry fights because dad would tend go on a binger.

Growing up during a time before women had the right to vote, Reagan’s mother, Nelle, lacked economic and political independence to leave her husband. She stayed with Jack, her husband, reasoning that his alcoholism was a disease. He believed Jack couldn’t help it, he suffered from an illness which rendered him incapable of acting any better.

Yet, Reagan’s father wasn’t all bad. Some nights, Reagan would come home from school to find his father sober, embracing him in a hug followed by a few rounds of catch. On other nights, however, wrath brought despair on the Reagan household.

Reagan needed to find a way to cope.

Today, we know call these adverse childhood experiences, or ACE. Nadine Burke Harris, Ph.D., author of The Deepest Well: Healing the Long-Term Effects of Childhood Adversity, thoroughly explains how traumatic events as children can stunt development. Some examples of ACE include physical abuse, emotional neglect, divorce, or a parent who is chemically dependent on drugs or alcohol, like Reagan’s dad. Scientists identified up to 10 adverse experiences a child can experience.

Because of his father extreme inconsistencies, Brands said Reagan learn to put an emotional veil between him and other people.

Since I was just listening to Harris’ book the morning of Brands’ presentation, I immediately recognized Reagan’s coping mechanism as a response to an Adverse Childhood Experience.

To put it simply, if enough bad things happen to us when we are kids, we struggle to handle basic life skills like holding a job, time management, or paying our bills on time. Scientists say a loving parent can act as a buffer, helping children learn to cope – much like Nelle’s buffering for Ronald.

Ronald Reagan’s coping mechanism benefited him while in office

Brands said the emotional veil Reagan built helped him as president. He was able to detach, leaving emotions out of debates. Additionally, he developed the art of compromise. Brands lamented the cut-throat, relentless arguments common in politics today. Reagan, instead, would enter a conversation, knowing he would only get part of what he wanted – tomorrow he could push again.

Reagan once said, “Die-hard conservatives thought that if I couldn’t get everything I asked for, I should jump off the cliff with the flag flying-go down in flames. No, if I can get 70 or 80 percent of what it is I’m trying to get, I’ll take that and then continue to try to get the rest in the future.”

Near the end of dinner, someone in the crowd asked Brands a question. Referring to the current debate regarding President Trump, the inquirer asked, “Would Reagan have pushed for impeachment?” Brands, admittedly so, repelled the question, saying there is no way for historians to accurately answer those questions.

But, he did suggest that Reagan would not have done well in today’s political climate. Reagan’s attitude of compromise would have labeled him a weakling, easily pushed over by more-determined debaters. Unfortunately, some of today’s politicians will fight to the death instead of finding a middle ground ultimately benefiting the American people.

We can all learn from this great insight.

Between his alcoholic father and supportive mother, Reagan learned life wasn’t perfect. Some days would be good, and other days would just suck. He brought this attitude into the presidency – to push for his agenda but also recognize, to quote The Rolling Stones, you can’t always get what you want.

In addition to Brands’ book, you can read more about the impact of Reagan’s father from historian Peter Feuerherd HERE or a less-rosy interpretation from historian Robert Gilbert HERE.

Thanks York County History Center for throwing such an energizing event! I took away not only valuable knowledge about Reagan, but that yearning to learn more – that curiosity that Dr. Fyfe infused in me so many years ago.