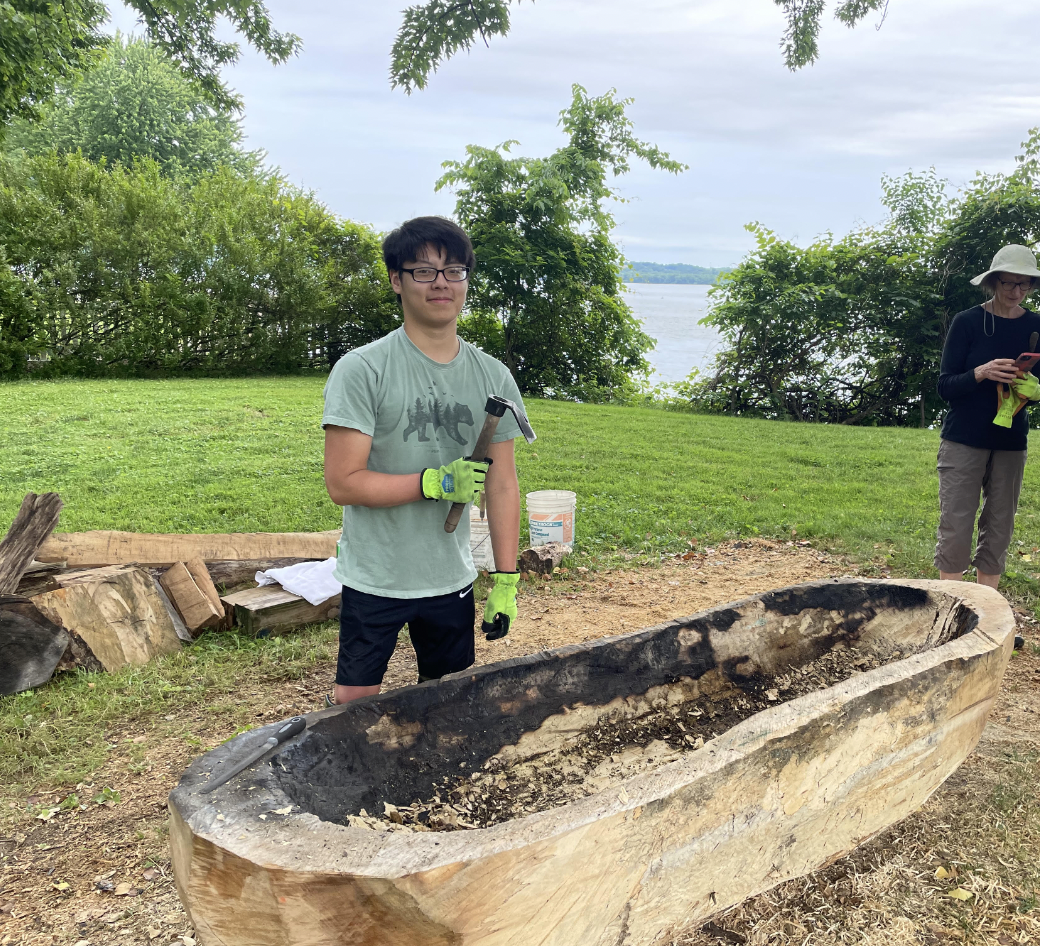 Lancaster County’s Noah Platts heard about a bunch of fallen trees on a friend’s property. He saw opportunity in a particular tulip poplar cylinder. It was brought to the Susquehanna National Heritage Area, a Wrightsville cultural site that interprets Native American heritage along the Susquehanna River.

Noah has spent 65 hours alone, but a total of 183 hours of work has gone into his hand-dug canoe with the help of volunteers, other scouts, family and friends.

Oh, and did I mention that Noah is only 17 years old?

Like many young people, he learned from YouTube. He watched someone online for inspiration – like this video by Northmen. However, this process dates back thousands of years with Indigenous Americans.

Indigenous Americans used lightweight wood such as birch, but the  swift and rocky Susquehanna proved too precarious. That’s why the native peoples of this area traveled more on their network of footpaths than in their hand-dug canoes. Instead, they used their boats for fishing, carrying meat and hides, and ferrying across the river.

The oldest canoes date back 6,000 years in the northeast United States, but fewer than 20 have been found in Pennsylvania. Early reports from English explorers estimate Native American canoes along the Chesapeake reached 50 feet long, squeezing in a person every foot. John Smith witnessed Susquehannocks in their own dugouts, but no archeological evidence has been found. (Archaeologists believe they sunk them with rocks to preserve the wood’s moisture and hide them from thieves).

The Susquehannocks’ dependable canoes meant they were hesitant to adopt white settlers’ planked boats. With a loaded canoe, paddlers could overtake an English boat of comparable size. In fact, settlers found canoes better than their own vessels, quickly transferring their naval allegiance to the indigenous practices. The John Wright ferry originally employed lashed together dugout canoes to move wagons across the Susquehanna River.

Noah Platts hopes to finish his canoe sometime in July

Once Noah reaches 13 inches deep, he’ll waterproof the canoe with a pine sap resin to keep the wood from rotting. Launching it into the river will be a day filled with “mixed emotions,” he says. “I’ll be relieved and happy, and really scared.”

Noah isn’t the first to try his luck with his own hand-dug canoe. The York Dispatch reported in July 1908 that Gordon Ness, along with another member of the River Side Club, departed Long Level in an Indian canoe, destined for Havre de Grace and then the Chesapeake Bay.

The Pennsylvania Historical and Museum Commission also launched an experimental archeology initiative to create full-size canoe replicas using the same tools and techniques of the Susquehannocks from early explorers’ descriptions and illustrations. Noah referenced the commission’s 2005 PowerPoint, explaining that the process has been simple, just time consuming. “The hardest part is learning how to get the angle,” he says.

Twenty years ago, PHMC wanted to create the canoes to bring awareness to the health PA rivers and the Chesapeake Bay. Noah has his own reasons.