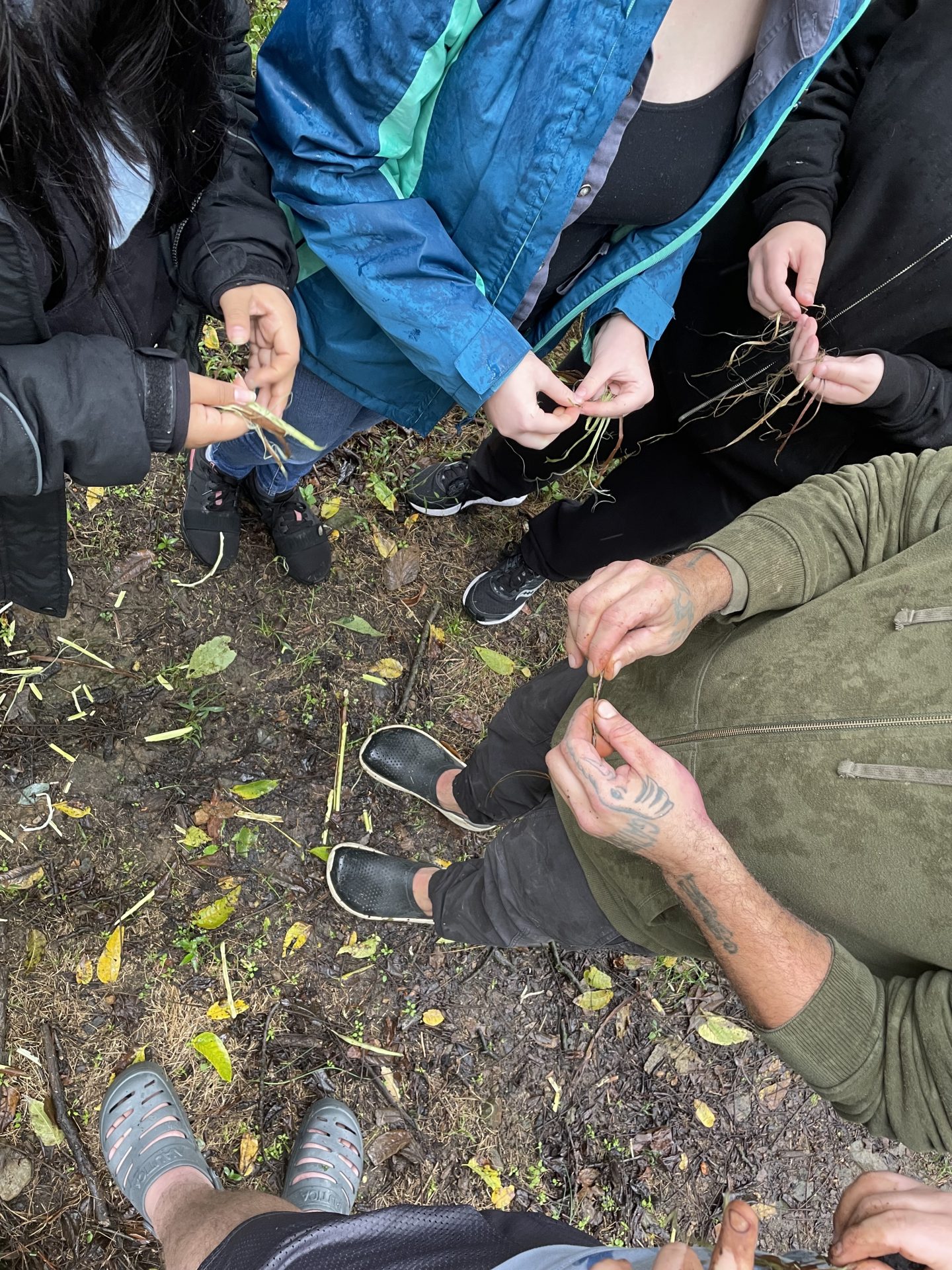 Five of my students twist dogbane stems in their hands. But it’s not as easy as Wilson Alvarez, our guide, makes it look. While the cord seems to magically drop out of Alvarez’s fingers, our stems rebel against our awkward twisting. We’re attempting to make rope — a practice dating back to Native Americans from our area.

Similar to the fiber made from hemp — dogbane is sometimes called Indian hemp — the shrub produces flexible branches that, when twisted and coiled around each other, make a dependable rope. The Susquehannock Indians used plants like this to assemble nets for fishing, clothing straps, and cords for tying. Jess McPherson, a Susquehanna Indian of Shawnee descent (Spring Garden Township), tells me “it makes the strongest cordage, second is milkweed.”

As a history teacher, I can only do so much within the walls of my classroom. One rainy Saturday, five of my students agreed to take a foraging class from the Horn Farm Center in Hellam. Instead of just telling my kids about the American Indians’ connection with nature, Alvarez shows them.

Learning from the land

As he transforms a plant we pass everyday into a practical tool, we notice tattoos on his hands. They read “Hunter” and “Gatherer” in big letters spanning the length of each fist. “It’s a commitment that I always stay true to what I believe,” Alvarez tells us. “If it made it harder to get a job, then [that job] didn’t fit the commitment I made to the Earth.” Alvarez works as a woodland steward for the Horn Farm Center, a place that aligns with his own values.

Next Alvarez takes us to a plant we ignore all the time — the pokeweed. I remember sampling the deep blue-purple berries as a kid only to quickly repel the bitter juice. Thankfully, my taste buds have evolved to detect the toxins (the entire plant is poisonous, especially the berries!).

He teaches us something we didn’t know: people actually eat it! He explains how many from Appalachia boiled the young stems and leaves three times, wicking more toxins out with each application. “Why,” one of my students asks, “would someone take the time to do that?”

Alvarez has an answer. He describes how modern Americans take our grocery stores for granted, and that not everyone has had that luxury. African Americans, he explains while rubbing the deep purple juice on his tattooed hands, needed to understand the landscape during times of need. For many, this weed meant survival.

The American Indian Health and Diet Project reports that some tribes used pokeweed as a medicine such as a cardiac stimulant, a cure for rheumatism, and a treatment for anxiety. The American pokeweed, that noxious invasive plant that grows along our fence rows, in pastures, and under power lines, was a valuable food and medicine source during difficult times. My students and I appreciate the plant and people’s knowledge of it so much more.

Getting schooled in nature

Right as I’m starting to get a grasp on these plants, Alvarez stops me. “Invasive,” he says. “I have an issue with that word.” My students and I ready ourselves for another lesson:

“Words paint pictures. When you say words like invasive and alien, you put them against a plant. There is no malice against what it is. It’s not evil. It didn’t want to be here. When we start to do that, it clouds our minds. We’re talking about plants. The word ‘war’ is used all the time. We poison them, we cut them, we remove them, we destroy them.” Yes, Alvarez admits, some plants do harm to the landscape: “But it’s not a malicious intent. We brought them here, it’s not their fault.”

Wow, I think. I never thought of the word “invasive” this way. Alvarez links the conversation to social justice movements. “The same thing applies to people,” Alvarez continues. When we apply that word to human beings, “they lose their rights. You devalue them.”

Alvarez spent his first 11 years in Brooklyn. His father recognized the dangers of raising a son in the projects. Besides, Alvarez liked the wooded acres and farmland of Lancaster better. “There’s no such thing as a forest in Brooklyn,” he says. Alvarez’s parents, who came from Puerto Rico and Cuba, taught him the importance of flexibility: “You can’t fall in love with our idea of a place. It’s always changing, non-static.”

Recovering from the fire

The Horn Farm is familiar with change. In October 2021, its historic farmhouse dating back to 1860 was struck by lighting and caught on fire.

“We were devastated,” Alexis Campbell, executive director, tells me in an update. “But we were also absolutely humbled by the outpouring of support from our friends and neighbors. It’s been a challenging year and we have worked hard to recover.”

Campbell and her team have started the design process for the new building. They’re working with Murphy and Dittenhafer for architectural services, Lewis Contractors for pre-construction services, and 7group for green energy design consulting. They’ve also received a number of grant funding and private contributions. “We still have funds to raise, and if our timeline stays on track, we hope to be celebrating our new green and energy efficient classroom and office spaces by this time next year,” Campbell says.

While the fire disrupted daily operations, the Horn Farm Center flipped the catastrophe into a launchpad for a new strategic vision. Calling it the “evolutionary plan,” its goals include growing and diversifying the team, expanding facilities, and going 100 percent carbon neutral.

Seeing the burnt farmhouse teaches my students a difficult lesson: nature doesn’t exist to serve us. Like the fire from lightning, or the poison of the pokeweed, or the sturdy fibers of the dogbane, we have to respect and learn from the environment.

As we conclude our foraging class, Alvarez slices a fresh pawpaw. For all five of my kiddos, this is the first time they’re tasting the native fruit. “You must have a reciprocal relationship with the landscape,” Alvarez says. “Don’t go out and just take from nature. The forest doesn’t need you. But it may need you to move a log so their roots can drain. Small interactions that take no time for you, but can help growth. This takes efforts on your part. Don’t just identify the plants that you can eat, identify all the plants and figure out how to help them.”

Other articles of interest