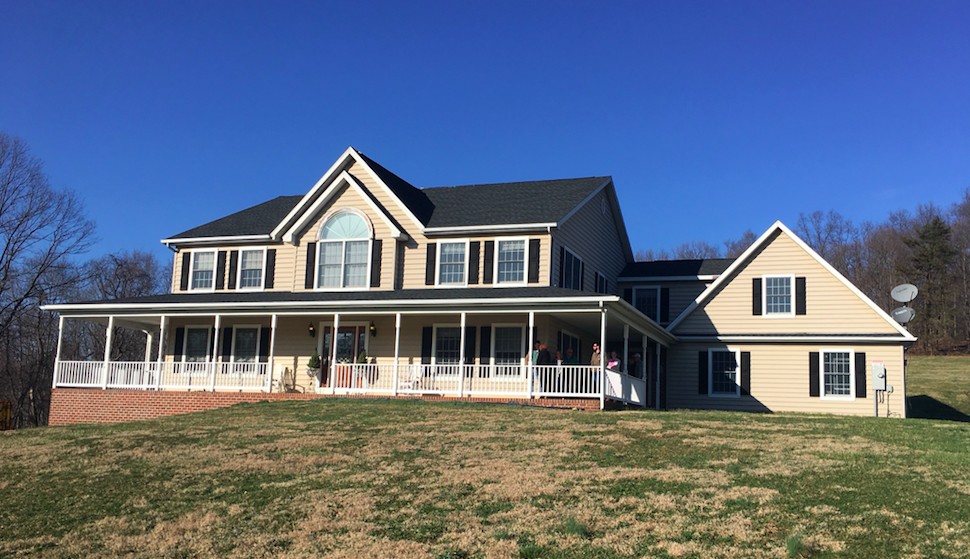 Behind pink-tinted glasses, she recalls a story from 1978 about her sister, Diane Walburn.

On a cold night, Diane suffered from the pain of cancer. At that time, few medications were permitted for home-use to help cope with the suffering Diane experienced.

To ease the anguish, Walburn requested to go to the family’s farm just two miles away so she could sit by an outdoor fire. Without hesitation, Titanish and their father delivered Diane to the heat – the warmth, her sanctuary – so she could find relief.

Titanish told me during our interview, “She wanted to go there to feel better.”

To make the environment as comfortable as possible, the family placed a tarp over a lazy boy recliner and set Diane upon her outdoor haven.

This memory serves as just one example from Titanish’s family history that motivates her to help those suffering from cancer through The H.O.P.E. Haven – Help for Oncology Problems and Emotional Support co-founded by Titanish and Jeanette Cartwright.

Her son, diagnosed with cancer just two days before Christmas in 2005, was told that this holiday would be his last. Thankfully, fourteen years have lapsed and her son lives on.

Additionally, her brother, father, grandparents, aunts, cousin, and nephew were all diagnosed with lymphoma – a type of cancer oncologists believe is hereditary.

At age 20, Diane was given six months to live but she fought for eight more years, passing away in 1986. Even though her strength proved tougher than the malignant cells for a time, the years of fighting took a toll on the family.

That is why Titanish along with her husband, Ed Titanish, devoted the past 25 years to helping people with cancer, including building a retreat for those afflicted with cancer.

Resting on 17.4 acres on Blymire Hollow near Stewartstown, The H.O.P.E. Haven will hold 10 guests at one time with two full kitchens, four full bathrooms, and six bedrooms.

Families can reserve the house for up to five days. While there, guests will enjoy outdoor amenities such as a pool, patio, a water feature, basketball hoops and volleyball nets, a picnic area, and a playground with cleanable surfaces. For those who cannot hike on the walking paths, a golf cart will chauffeur them around the grounds.

Looking over a beautiful hillside, rocking chairs will soothe patients who listen to tree frogs and watch the deer graze.

Titanish wanted to ensure families would be entertained so they installed a movie room, foosball table, and a room for yoga.

Next to the haven rests a conference center. Built out of a pole barn, the building will host support groups, the reception area, and offices.

“We know what it’s like to be struggling,” Titanish told me. So they’re hoping their efforts will ease some of the challenges of fighting cancer.

In addition to the haven, H.O.P.E., a nonprofit, gifted 92 back-to-school packages to children last year including book bags and gift cards to purchase school supplies.

With 469 active patients who receive support, The H.O.P.E. Haven will have no trouble booking the rooms.

“As long as it’s legal and I can get volunteers,” Titanish commented, “we do it.”

On average, the organization has 16 regular volunteers. However, 100 volunteers are available on a weekly basis for fundraising which is how the nonprofit is financially support. Everyone from Habitat for Humanity crews to plumbers to mowers volunteer their time and skills.

H.O.P.E. is not considered a hospice because they primarily help people who are fighting cancer by supporting areas of their life that do not involve physical care such as nursing.

Throughout the tour, I kept encountering the same feeling: peace. Titanish’s strong faith-based approach to providing relief touches all those who visit the retreat.

However, the history of cancer treatment hasn’t always been this positive .

Siddhartha Mukherjee, author of The Emperor of All Maladies: A Biography of Cancer, describes the hunt for the cause and cures of cancer by taking the reader on a hideous, biographical history of man’s relationship with the disease.

Many times, scientists and researchers found their desire to help humanity’s “war” against the disease blinded them into following the wrong path.

For example, putting the “cart before the horse,” surgeons in the nineteenth century took more and more infected regions off the body beginning with breasts, then pectoral muscles, followed by glands and even bone such as the case with breast cancer.

This brings into question the ethical and practical use of experimental treatment. People are more likely to try trials because some may become desperate – many people need little convincing because they want to be cured so badly.

The alternative? Submit to the disease and that’s not what most people want.

Mukoherjee argues the medical community has an obligation to their patients to use drugs and treatments with founded claims and evidence.

By the twentieth century, doctors plunged into the depths of cancer treatment by removing visible tumors via surgery such as radical mastectomies or attacked invisible malignancies with X-ray radiation.

Later, leukemia met its foe with breakthrough chemical technology in the 1940s.

However, soon after this discovery financial support slowed. Cancer research needed a mascot.

Jimmy, a young boy with lymphoma in his intestines – his real name was Einar Gufstason – shone with enough vigar to appeal to the public.

He spoke on the radio and rose public awareness by encouraging donations. During his birthday party, it was less of an individual celebration of Jimmy’s survival and more of a coming together of scientists, philanthropists, and the media to fight cancer.

The Jimmy character-campaign against cancer ultimately white-washed cancer, removing the awfulness of cancer from the popular scene. However, the powerful persuasive techniques brought attention to an area dependent on supportive funds.

Due to the increased financial support, researchers discovered that cancer is a total disease. This means it requires a multidisciplinary approach. Nutritionists, chemotherapists, medical residents, nurses, social workers, psychiatrists, and pharmacists are all needed in this fight.

And now for Yorkers, H.O.P.E. has joined the battle.

To keep with Mukherjee’s war metaphor, the entire arsenal needs mobilized outside of the patient as well as within the patient. Their entire being must orientate its energy toward defeating the threat from within.

It took fifty years for the walls separating medical fields to crumble into one unified force. Medicine and chemistry first collided when the discover of vitalism, or the idea that man can naturally produce chemicals. Now, molecules in a laboratory could help a living organism.

It took us years and billions of dollars for the medical community to finally realize cancer was not born out of a virus or infection, but a mutation of our own cells. And it took cancer for the scientific community to start seeing what connects them, not what separates them.

H.O.P.E. continues the battle on cancer

Cancer takes away the present, distorts the past, and blurs the future so it becomes nearly impossible to see life as it once was or may be without the infliction.

This is what makes The H.O.P.E Haven so special – patients can forget they have cancer, even if it’s just for a few days.

The haven restores a much-needed sense of normalcy.

Opening in the fall, The H.O.P.E. Haven will change lives.

And last but not least, the haven will feature a fire ring for not only roasting marshmallows, but warming by the fire such as Titanish’s sister did more than thirty years ago.