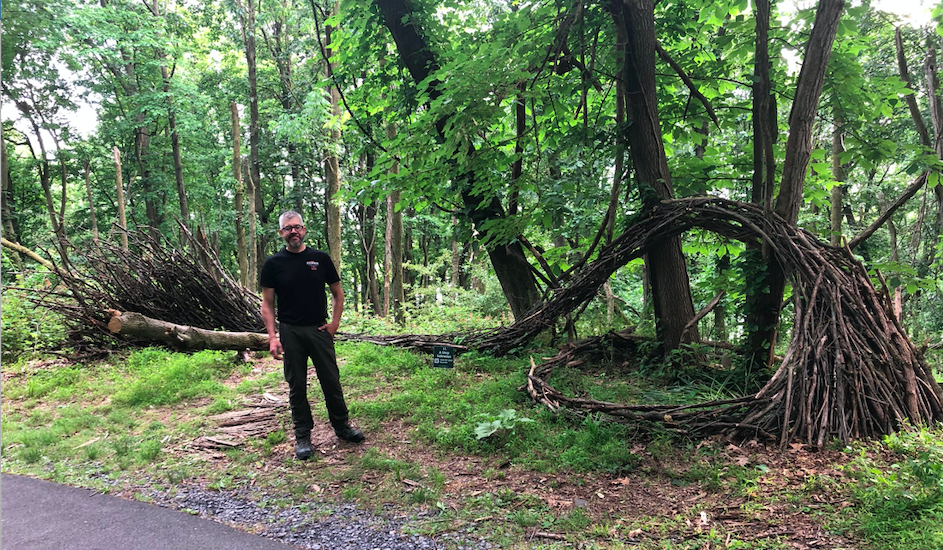 Harrisburg’s Art in the Wild: An eco-friendly fantasy world

I meet Steven Reinhart of Mars, a town just north of Pittsburgh, in the woods. He’s repairing his art by re-weaving sticks into his exhibit. However, he’s not allowed to touch “the green,” or the growing plants. That wasn’t a problem when it came to the poison ivy thriving right in the center of his installation.

I ask him what the stone in the center of the spiral represented. “I thought it looked good,” Reinhart tells me. “I prefer for people to interpret it for themselves.” He continues, “For me though, I feel peace and comfort.” Over the years, his sons, Paxton (8) and Hudson (6) assisted him. They see a fantasy world in the swirls of tree branches.

I look up the walking path and see other exhibits. From now until Sept. 30, you can see Art in the Wild at Wildwood Park, Harrisburg. It’s an outdoor exhibit with 17 structures along a 3.1 mile loop. Here are three of my favorites:

When I work on projects, I largely enjoy the finished product. I like looking at a job well done and thinking, “Yeah, I did that.” For Reinhart, however, he prefers the journey. “Always the journey,” he says. “It’s not about the end goal for me.” He knows. he was finished when he ran out of time, “and sticks.”

A few weeks ago, a storm brought a medium-sized tree down right on top of the exhibit. Looking at it, he contemplated what to do. He opted to infuse the tree into his art, the hazard now flowing into his creation.

As Martin Isler and Dieter Arnold point out in their book, Sticks, Stones, and Shadows, the Egyptian pyramids are made of simply sticks and stones. Of course, the construction of the pyramids took a lot more effort and engineering than that simple explanation, but my point is that great work can be designed and built from nature.

In the spring when Reinhart designed his display, he looked at the woods and remained “totally open.” He didn’t scout. He didn’t plan. Instead, he arrived at the park and roamed until a space spoke to him. Then, he started collecting. Unlike some of the other artists who out-sourced materials, Reinhart chose to use only items he found at the site: sticks, twigs, vines, trees, and rocks. His theory? Nature can reclaim all that he borrowed. It will fold right back into the ground, as he found it.

“I feel that if I’m in nature, I want to use nature.” Reinhart thrived in this challenge.

The connection between art and nature

I find artists in other parts of the country also use sticks as their medium.

Patrick Dougerty, a sculptor from North Carolina, creates gorgeous stick art. Using saplings, he flexes them and weaves them together without any screws or wire. A recent article in Mood of Living: A Magazine for Conscious Living, quotes Dougherty and his interest in natural art: “Our contemporary challenge is how to reconnect and live in harmony with the plants and animals that still share the earth.”

In the Journal of the History of Ideas, A. J. Close examined the theoretical connection between art and nature. The author pointed out that art imitates nature, and that this idea pre-dates Plato. Human art, the author argued, is even dependent on nature. Others assert that art and the wild build into a mutually beneficial relationship. The ancient Greek philosopher Aristotle, for example, believed that art aids and complements nature.

Paul Godfrey, a York artist, paints scenes from all around York County. Even though he prefers acrylics and oils over sticks as found in the Wildwood installation, he frequently depicts nature in his art. You can find his art for sale at festivals, The York Merchant, and a showing at Molly’s Courtyard Café in August. Oftentimes, Godfrey will paint his image in plein air, remaining at the scene to capture the entirety of the image.

While researching for this article, I found a 1897 story in The Gazette titled “To Art Beginners.” Even before women had the right to vote, the author explained how art could be a platform for equality. “Let it be remembered, too,” the author wrote, “that in this profession a woman stands on precisely the same ground as a man. Publishers pay for what they want and get, with no regard to the sex of the one furnishing it.”

The author encouraged boys and girls to turn to nature for their inspiration. “Horses, cows, chicken, dogs, cats, sheep, his brothers, sisters, parents, and playmates all came under his eager pencil. The pictures were laughably crude, and some of them bore little resemblance to the originals, but he began at the right point, nature…”

Some of the recommendations to new artists from 1897 still reign true:

More than playing with sticks

Nature’s Nation by Karl Kusserow explains how art brings public awareness to environmental issues. The sticks Reinhart and Dougherty use show sustainability and the ethics of human’s attitude toward nature.

What started out as playing with sticks as children, turned into a craft that has gained them regional and even national attention. As it turns out, playing in the wild fosters an awareness of the natural world, leading to a career building eco-friendly fantasy worlds for others to enjoy.