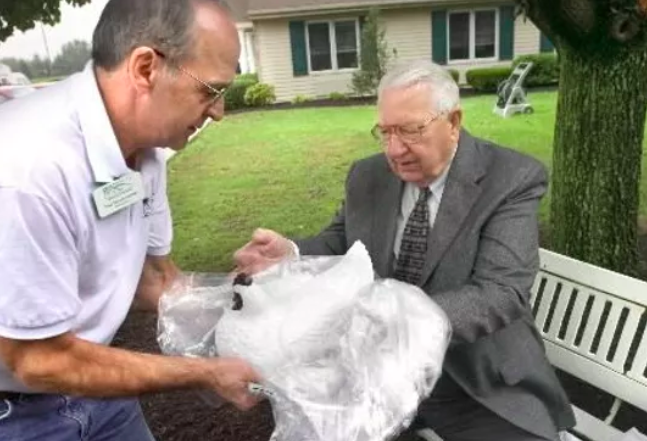 In 2004, George Leader and Paul Masenheimer, who painted his nursing home - Providence Place - in York County's Dover Township, admire a ceramic chicken. The chicken rests outside the nursing home to remind us of the link between chickens and the Leader family.
Posted by Jamie NoerpelNovember 4, 2018November 20, 2018 Business History, History and Current Events, Wandering in York CountyNo Comments

The first governor from York County got his start from chickens

Tuesday, Nov 6, was election day. We had two Yorkers running for the governor’s seat, and Tom Wolf triumphed.

This is not the first time York produced a great “leader” (haha). For four years in the 1950s, George Leader, from Leader Heights, operated as governor of Pennsylvania.

A few months ago, I conducted some research on his accomplishments because this Yorker, in addition to helping our commonwealth improve, owned chickens. Those of you who know me, know I love my chickens. I have five lovely hens named Michelle, Melania, Jackie, Edith, and (of course) Lady Bird. Can you guess what my chickens have in common? They’re all named after first ladies! This is not the first time politics and poultry have mixed.

Outside of Providence Place Retirement Community, a visitor walks past a ceramic chicken. Once inside the retirement home, more decorative icons of chickens balance on side tables and fireplace mantles. What are so many chicken sculptures doing in a retirement village?

Since half of York County’s population in 1940 (approximately 75,000 people), lived in rural settings and engaged in some facet of agriculture, the livestock business fit nicely into the popular occupation of the time.

York’s agricultural production flourished so well. During that same year, York ranked third in the nation for poultry output with 17 million eggs and 1.7 million hens valued at over five million dollars. With over 7,000 farms averaging 62 acres on the county’s 903 square miles, it comes as no surprise that chickens hold a certain profile in our county’s history.

Born in 1918, George Leader helped his father grow the chicken business. Known for farming innovations including contour farming (a practice that conserved water and limited soil erosion), chickens grazed on the grass strips in the shade that rested between his cornrows without damaging the crops. If you want to learn more, Kenneth Wolensky wrote a book called The Life of Pennsylvania Governor George M. Leader: Challenging Complacency, which is where I retrieved this information.

Soon, Leader would incorporate his father’s forward-thinking ideas into his own initiatives. After serving in World War Two, Leader used the G.I. Bill to start his own hatchery on 50 acres in Leader Heights, the current location of the Country Meadows retirement village. Successful from the start, Leader’s annual production grew tenfold from 100,000 chicks hatched per year to one million.

Leader ran for office with many challenges — He was a young, a Democrat and from a county that had not produced a governor. However, in 1955, Pennsylvanians elected the second youngest, one of the most liberal, and first York County governor into office. The YDR’s James McClure wrote more about his campaign in his article called “George Leader became Pa.’s first governor from York, Pa., 60 years ago.”

Some urban historians hesitate to take the “son of a Pennsylvania Dutch chicken farmer” seriously. For example, John Bauman challenges Wolensky’s with a review of his book for the Pennsylvania History: A Journal of Mid-Atlantic Studies. After all, Bauman wrote, Leader was just a Yorker who lived almost his entire life in the county. However, once Bauman read Wolensky’s book on our first governor, he became impressed by Leader’s accomplishments.

Even with his conservative roots, Leader’s progressive plans as governor charged the commonwealth with energy. Serving for four years between 1955 and 1959, Leader strove to improve the economy through the Pennsylvania Industrial Development Authority (PIDA) and increase state funding for higher education and mental health. According to the Pennsylvania Historical and Museum Commission, Leader limited occupational discrimination through the Fair Employment Practices Council and enacted environmental protections.

As Bauman reports from his book review, Leader transformed the urban renewal projects in both Pittsburgh and Philadelphia. “Embedded in a Germanic American farming culture,” Bauman wrote, “Leader governed Pennsylvania during an epic liberal and transformational era in urban Pennsylvania.”

Leader passed away in 2013. His obituary can be found here.

So, chickens served as the launch pad for Leader to rise to governor. Strong leadership (oh my gosh, another pun! Couldn’t help myself) and chickens have deep roots in York County’s history. Just as Leader discovered, my first ladies have taught me hard work, dedication, and innovation (winter’s coming and I need to figure out how to keep my hens’ water thawed!).

By the way, there is even a Facebook group named “Poultry Keepers of York County” that I encourage you to check out if you own or are thinking of owning chickens.