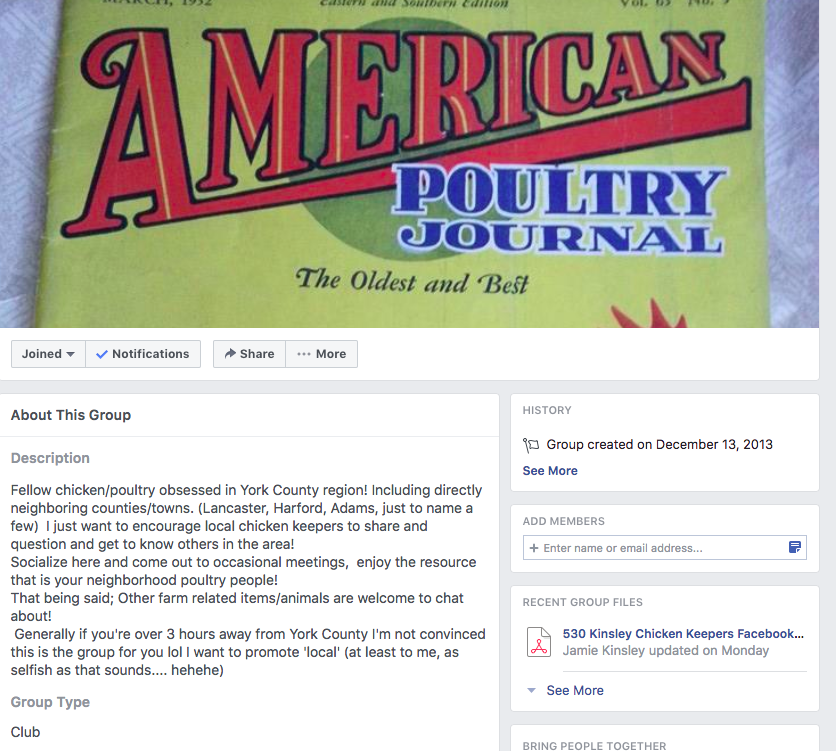 Screenshot of the Poultry Keepers of York Facebook Group's about page.
Posted by Jamie NoerpelDecember 13, 2018 Wandering in York CountyNo Comments

Keepers turn to Facebook to trade poultry advice, including treatment of a hoarse chick

A woman posted a video on the Poultry Keepers of York Facebook Group of her day-old chick chirping in a strange way, looking for advice on cause and treatment.

Another member of the community asked her if the peep may have swallowed something that could have stuck in its throat.

She suggested that the owner squeeze a drop of vegetable oil into the peep’s throat and gently massage its crop, the pouch located off a chicken’s throat that holds their food until digestion. Just like a patient’s owner with the a veterinarian, the users communicated back-and-forth regarding the treatment.

For my fall, 2018 semester at Penn State Harrisburg, I enrolled in a class called “Folklore and New Media” that relates to this hoarse chick.

The course syllabus reported that we, “will investigate, and illustrate, the presence of folklore across all communicative media… ” In other words, we study people and how they use technology.

Some people mistakenly think folklore is just the study of fairytales, legends, and myths. While they are correct (folklorists are indeed interested in these things), the field of folklore can be so much more.

Most simply defined, folklore is the study of people – what they say, make, do, and why those things are meaningful to them. Instead of looking up information on large institutions and other top-down establishments, we want to know more about everyday life. This field largely overlaps with anthropology but does hold a unique place in academia.

I asked my friend and fellow folklorist, Raven Haymond, for her definition of folklore. She wrote, “Yes, folklore includes things like fairy tales and the story of John Henry, but it also includes so much more. As folklorists, we study everything from cherished family recipes to ghost stories shared around the campfire to quilts pieced together at a quilting bee.”
Most importantly, we examine how people embrace traditions that are considered the vernacular, or “unofficial.” Historically, folklore was considered beliefs systems that were passed down from generation to generation and by word-of-mouth. Today, the definition has grown to include culture communicated digitally – hence, the name of the class “Folklore and New Media.”

Since the field of folklore includes all knowledge, values, assumptions, feelings, beliefs, and practices, pretty much any topic was fair game to research for the final paper. For this reason – and to no one’s surprise – I wrote about York. I focused on a particular folk network – The Poultry Keepers of York Facebook group. This is where the hoarse chick plays a role.

I wanted to know why people in York County who raise chickens use Facebook for their poultry–raising endeavors. Doesn’t it seem like a contradiction? People, such as myself, want to escape the fast-paced, digital world in exchange for a more simple way of life. We want to connect with nature, feel the feed grain run between our fingers, and wash our fresh eggs by hand. So then why would we use a website and other digital platforms for our practice?

Here is what I found:

Most chicken keepers in York use the Facebook page for three purposes: community building, information sharing, and buying and selling chickens and equipment.

Started in 2013 by a woman named Ashley DeVoe, the Poultry Keepers of York Facebook Group’s mission is “to encourage local chicken keepers to share and question” each other. As of December 2018, their group has grown to 924 members. By updating profiles and posting personal stories, people feel empowered while simultaneously  feeling more connected with others.

Social media acts as an easy and quick way to reach out to other people. On the Poultry Keepers of York Facebook group, friendships are formed.

Folklorists recognize the digital world as a process that is open or “reflexive.” This means we must acknowledge the collaborative nature of knowledge formation since nothing exists in a vacuum. DeVoe, the founder of the Facebook group, says she learns what brands of feed and equipment to buy, options for treats, history and breed information, and other “tricks of the trade.” She writes, “I love seeing how other people do things!”

Christian Ierley enjoys the free information that Facebook facilitates. In fact, she believes she probably would not have gotten into raising poultry or canning if she did not belong to Facebook.

“I find that seeing others do it or talk about it gives me the drive to do it for myself; it’s a great motivator for me,” she says.

Finally, many posts on this Facebook group feature chickens for sale. Credibility is very important when purchasing live birds from a non-licensed source. One of the administrators “vouched” for the seller: “He’s got great birds, I’ve always been happy with the ones I’ve gotten from him.”

The Poultry Keepers of York Facebook page provides the screening and support process in the same way government regulation operates. Similar to the informal, peer-review process of Wikipedia, the poultry Facebook page both scrutinizes and supports the reliability of the poultry-sellers.

Today, people who raise chickens or a garden, are seeking new ways to build their craft and communicate with others. The homesteaders’ method involves social media, specifically Facebook, to connect and learn from others.

Additionally, Craigslist may connect buyers and sellers, but it does not provide that feeling of community so many homesteaders desire. Facebook, on the other hand, creates a feeling of community, while simultaneously providing a place to gain and share information as well as buy and sell poultry.

Hopefully, I’ll get an “A” for all the research I conducted for my paper.

As for the woman and her hoarse chick: She reported her peep sounded normal and achieved full health a few days after the post.