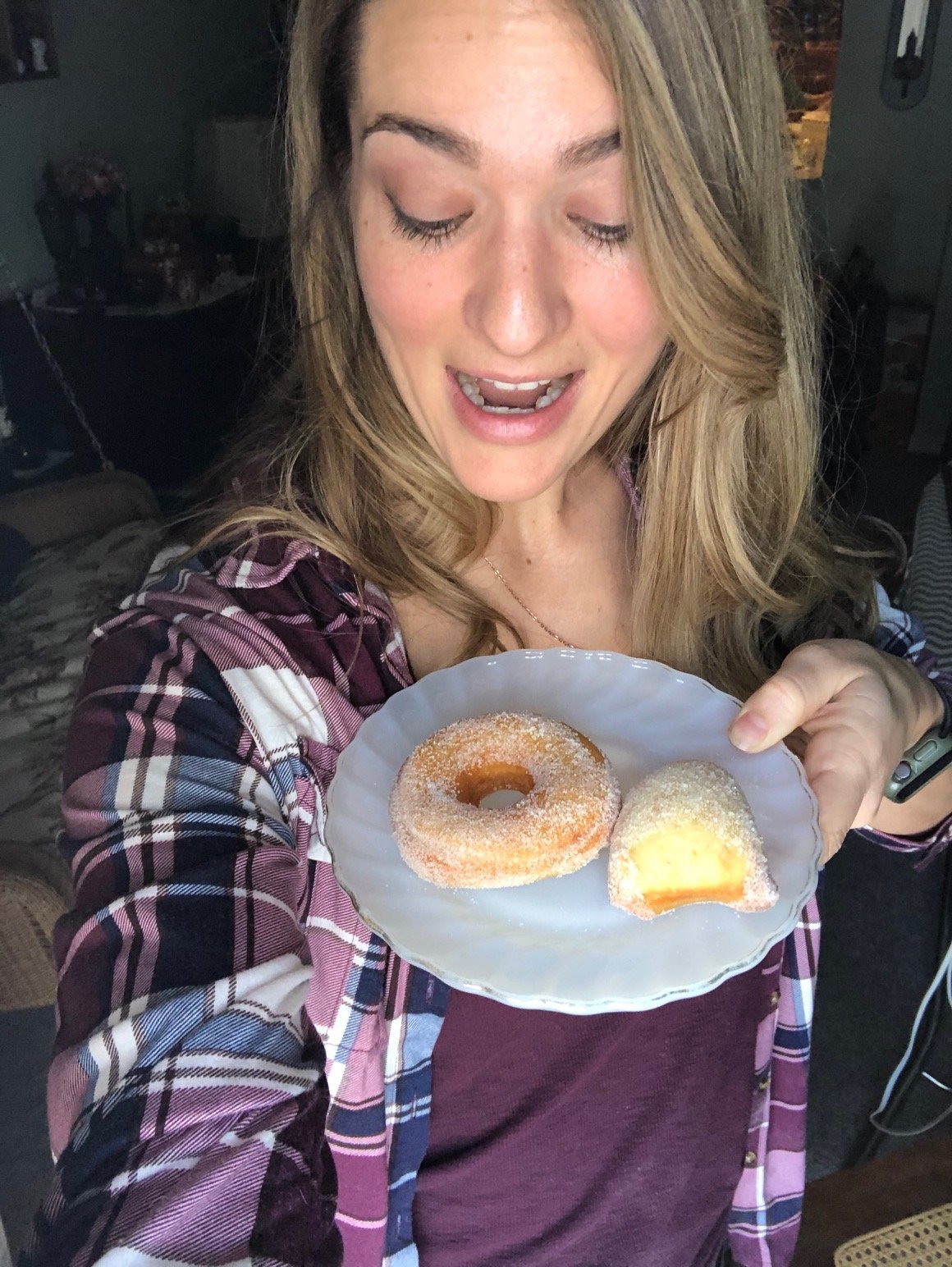 I limit myself to two fastnachts, to start. By the end of the day I'll consume at least five. Jamie Kinsley Photo.
Posted by Jamie NoerpelFebruary 16, 2021February 16, 2021 Wandering in York County6 Comments

A fastnacht isn’t a fastnacht without potatoes, lard and bossy Pa. Dutch grandmas

On Monday night, I head to Wanda Tyson’s house — my grandmother who I call Mama.

Wanda Dietz, a life-long family-friend, is there to help, too.

They both hackle me for my tardiness. “But Mama! It’s raining ice. I took my time.”

“Ok,” she says. “Are you coming straight from work? You need some dinner?”

A smile crosses my face as I tell her I’m hungry. “I made some vegetable beef soup if you want to warm that up,” Mama says.

After I’m full and ready to work, the two grandmas and I begin the fastnacht process.

We start with five pounds of flour in a dish pan. We put four pounds in to start, leaving the rest for later. Next we add 1 ¼ cups sugar and a tablespoon of salt. Removing the four small potatoes from the burner that boiled in two cups of water, Wanda pours the water out, mashes the potatoes, and adds the potatoes back to the water.

They test the temperature because “we don’t want to kill the yeast!” they warn.

“You don’t want it to go over 115 [degrees] because that’s how you kill your yeast.”

“It kills it,” Wanda echoes.

She adds two eggs and one pint of milk to the mixture, along with a two-ounce yeast cake that was dissolved in a quarter cup of water.

“Yeast cakes. That’s the golden ticket. I’ve gone hunting in Lancaster County for those things. Got to use yeast cakes.”

“A cup of melted lard. Lard. Lard!” emphasizing the ingredient so I know she’s serious.

“The one thing I saw on the computer was to use the palm of your hand and press down. Yep. That’s kneading,” Mama says.

Wanda jokes, “You mean all these years you had to take a lesson?”

“Well, I knew how to do it, but I needed to look it up to tell you!” Mama retorts.

After about 15 minutes, adding flour to remove the “stickiness,” the fastnacht dough is mixed and ready to rise. We place the two buns in their pans, under a table cloth, and in Mama’s spare bedroom with the space heater warming the room. At 10 p.m., she will smash it down, and again at 2 A.M. and finally at 6 A.M.

Why we eat fastnachts on Fat Tuesday

I don’t consider myself a foodie — someone whose life revolves around finding and cooking amazing meals. Generally, I’m not picky so I enjoy almost any food, regardless of ingredients. However, there is one food item that needs to be “pure” Pa. Dutch: fastnachts.

Recently, a friend purchased “fastnachts” from a local convenience store. Upon reading the label, I noticed, with horror, that potatoes were one of the last (and therefore least) ingredients. Worse yet, there was no lard. No, these “fastnachts” do not deserve that title.

I am a traditionalist at heart, and that means eating fastnachts from my grandmother’s kitchen each year. I can only think of two years when I missed her special treats because I had grad class.

Likewise, York Countians from our past placed similar emphasis on the day.

For instance, Pennsylvania German farmers believed their flax crop would suffer if they failed to observe the holiday, reported an 1881 article in The York Dispatch. I can relate to my ancestors whose excellent excuses condoned eating delicious baked goods.

By 1916, the same newspaper estimated that number increased to 216,000, and the average person consumed four fastnachts — I eat at least four with ease.

We eat Fastnachts on Fat Tuesday, the day before Lent — 40 days in which some Christians give up sweets. You’ve probably heard of Mardi Gras, or the French term for Fat Tuesday. To get rid of all the fat and sugar in the house, York Countians made fastnachts to use up all the temptations. So, we eat fat cakes on “fast night,” or in German, “fastnacht.” After 40 days of fasting, we celebrate Easter with candy and other sweets.

Today is also called “Shrove Tuesday,” meaning the absolving of sins upon penance.  Historically, it was customary for people to confess their sins on this day, too.

Tuesday morning we roll out the dough and cut out the pieces, nestling them under a blanket to continue raising.

Mama and Wanda always start frying with the top side down. That way the fastnachts continue to rise while frying in lard to create an even-looking dessert. Finally, we top them with sugar or glaze for the final, delectable product.

Hopefully, you can get your hands on some old-fashion, Pa. Dutch fastnachts today. My only regret is that we aren’t all lucky enough to have grandmas who make old-fashioned fastnachts with potatoes and lard.

You can also read more about fastnacht history HERE.

6 comments on “A fastnacht isn’t a fastnacht without potatoes, lard and bossy Pa. Dutch grandmas”