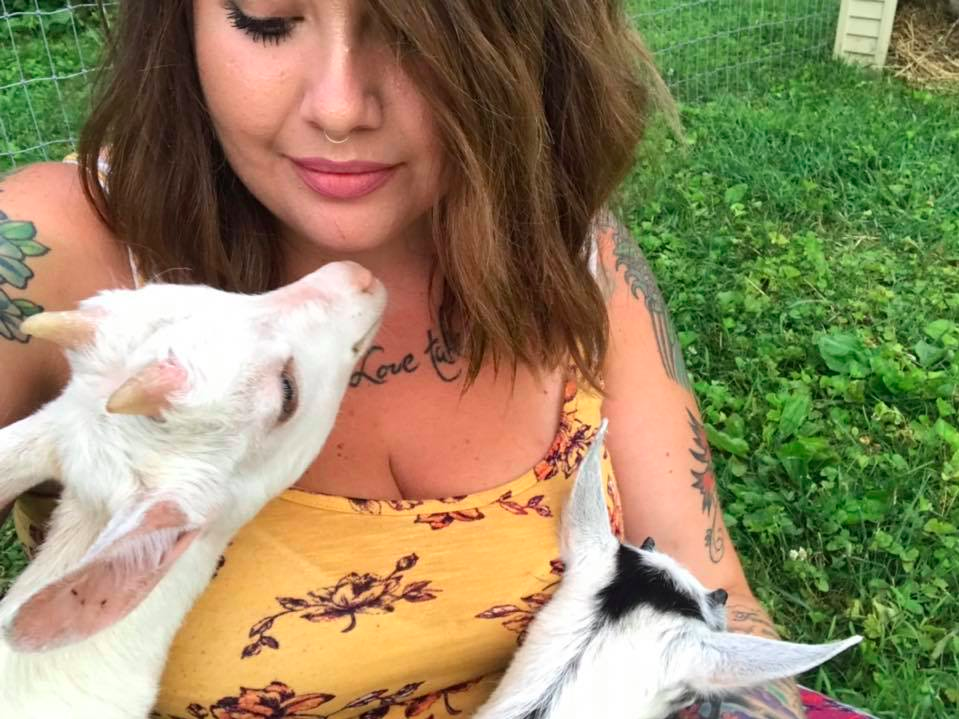 Amanda Clark rescues animals where they live happily ever after in their farm sanctuary. Here with Us Farm Sanctuary Photo.
Posted by Jamie NoerpelJuly 2, 2019July 2, 2019 Wandering in York CountyNo Comments

Farm Sanctuary in York County dismantles fence between us and livestock

Turning off Tunnel Hill Road in Seven Valleys, I progress down a gravel lane. Trees shade the road from both sides, creating a green tunnel with peaks of light reflecting off my black Subaru Impreza.

It’s 12:30 p.m. and I’m meeting Amanda Clark, the co-founder of Here with Us Farm Sanctuary, a nonprofit.

When Amanda and her husband, Steve Clark, drove down this same driveway back in March, she wished to herself, “please be nice, oh please be nice.” It was everything they hoped for and more.

The lane opens up to a beautiful, six-acre farm with an old, white colonial-style house. After I exit my car, I hear chickens talking, a pig oinking, and goats chatting up a storm. People who say country life is quiet don’t know the first thing about a farm.

A farm sanctuary is not an ordinary farm

When I contacted Clark for an interview, she responded with, “We are a farm sanctuary so quite different from a normal farm.”

What makes this farm different? For starters, these animals are off limits, meaning they will live out their long lives in the green pastures with no fear of the slaughter house. The farm is a rescue, not a livestock compound. In fact, the Clarks avoid the animals’ byproducts, called veganism, and feed the eggs back to the chickens.

“Our mission,” their Facebook page says, “is to provide a safe and loving home to farm animals who have been abused and neglected.”

In 2015, the Clarks visited a farm sanctuary in Watkins Glen, New York, solidifying their dreams that they could rescue animals, too. Amanda had been vegetarian for 12 years, but over night, after seeing the cows, her husband became vegan and they set out on their journey to find an affordable farm in York County.

Meet the animals at Here With Us Farm Sanctuary

The Clarks started with just two goats – Patrick and Darby, named after their brother and sister-in-laws’ middle names. Now, they’re up to four cows, one pig, 14 goats, and 18 chickens.

Even though she loves all the animals, cows hold a special place in Amanda’s heart. All four of her cows are males born from dairy cows. (You probably don’t need to be told why males are useless on a dairy farm). So, the couple rescued Chester, Ronnie, Reggie, and Rufus from the chopping block.

“Chester’s family was no longer able to take care of him and the only other place interested in him was a meat farm, so we took him in instead!” Amanda told me.

Monks, for example, negotiated with a farmer to save Rufus, a Jersey cow, asking that the farmer give him to the Clarks to take care of him for the rest of his life. The couple unhesitatingly agreed.

According to John Gibson’s History of York County Pennsylvania, the first cows brought to York were large-sized, long-horns that hooked backward. Gibson called them “brindle color” which resembles a subtle tiger-stripe that’s lined with dark and medium browns. In 1830, short-horns came to York. It wasn’t until the Civil War that Jersey cows, like Rufus, came to York.

James Lemon, author of The Best Poor Man’s Country, believes the average farm in Lancaster and York County raised one to two cows during the late 1700s.

The Clarks may have twice as many cows as Yorkers 250 years ago, but they have only one pig. Even though swine were ubiquitous in York County during the eighteenth century, the Clark’s single pig named Winston takes all their love.

The pot belly pig pressed its slippery snout to my palm and smelled me like a dog. After deciding he liked me, Winston rolled over on his belly so I could scratch the coarse bristles that are his belly hair.

“He must like you!” Amanda said. She was a little surprised since Winston isn’t always the nicest, at least toward men. “He hates men,” she told me. “We think he was abused.”

Living as a pet in the suburbs of Philadelphia, Winston’s previous owner allowed him to hop around on a broken leg that never healed properly. Just like a dog, pigs remember how they were treated. Now, he aggressively chases after her husband. But, that doesn’t affect Steve. He plans to keep showing compassion toward Winston, regardless if Winston loves him back or not.

Most importantly, Amanda believes, is that we show respect for farm animals because they are “just like us – individuals with personalities and feelings.”

Bearing witness to where our meat comes from

Although I sparingly eat meat (to the point that my dad says I’m not a real Tyson), I openly told Amanda about my egg, dairy, and meat-based dinners. However, my husband and I try to ethically source our food which means visiting farmsteads nearby – usually my neighbors – where I can see how the animals are treated.

Vegans can be pushy, I nervously awaited her reply.

Amanda, without judgment, told me any small step we can make to take and eat less from animals means we’re building empathy.

A couple days later, Travis Markel, a sous chef at John Wright Restaurant, told me every person who consumes meat should be required to witness the death of an animal. That way, we realize the plastic-wrapped tenderloin from the supermarket really is the working back muscle that helped a cow walk for 18 months before slaughter.

As a chef at farm-to-table restaurant that prides itself on their from-scratch, locally-sourced food, he’s pleased that locals visit a sustainability-conscious eatery. But, he wishes more people who take the time to participate in the growth, harvesting, and production of their food.

For the Clarks, seeing where their meat comes from fostered a desire to rid their plates of flesh. For others like me and Markel, it means appreciating the animal and making sure it lives as healthy a life as possible before being killed.

What Amanda and others such as Markel want is to dismantle the mirage behind our meat production. Or, at least be around animals to recognize the human-like characteristics in each animal.

Luckily, Here With Us Farm Sanctuary will have an offer a tour of their farm on July 20th at 1 p.m. so you can get to know livestock animals better. It could even motivate you to go vegan! Go to their Facebook page for more information. The tour is free of charge, but your $20 donation helps cover the costs such as hay, straw, grain, shelters, and veterinarian bills.

Once you’ve visited their farm sanctuary and you’re looking to take that step toward a more plant-based diet, York County offers many vegan options. Amanda prefers Nittany Pizza located in the Queensgate Center because of its immense vegan menu.

The Clarks’ life-long obligation to their rescue animals will continue until Amanda’s “too old to move around.” In the meantime, I hope to visit those cute animals again in July for some more snuggles.