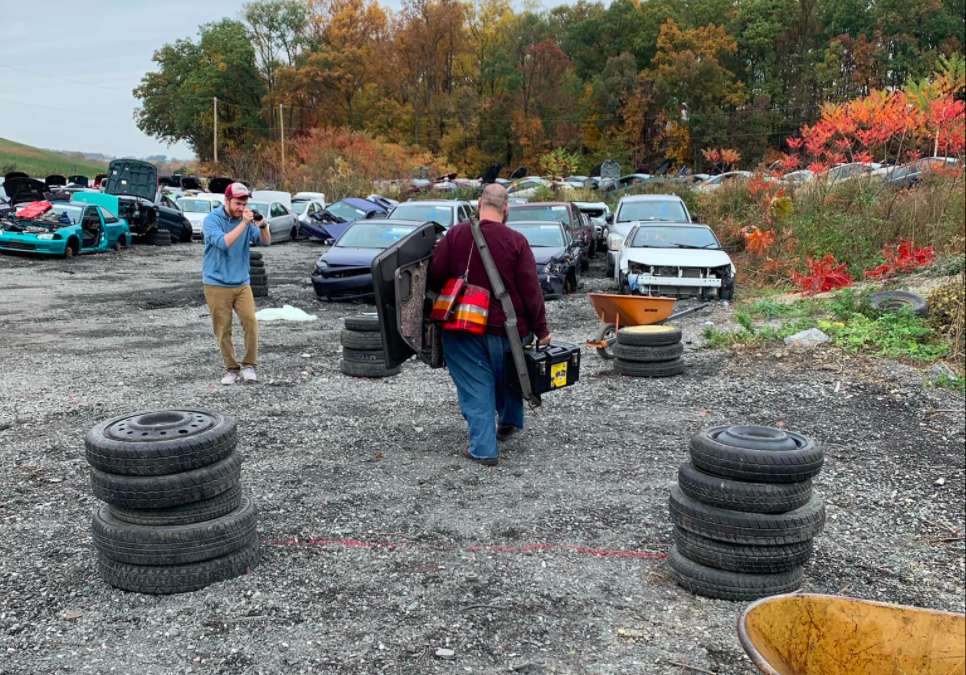 For $50, you can carry as many used car parts as you can just 15 feet this weekend at Eichelberger's U-Pull-It event.
Posted by Jamie KinsleyMay 14, 2021May 19, 2021 Wandering in York County2 Comments

Car enthusiasts had the opportunity to scout between thousands of cars, most of which were manufactured between 1990-2012, to find the parts. Then, for just $50, they carried all the items they can 15 feet.

Americans make over one billion trips in a week (trips are when someone leaves the home for more than ten minutes). However, cars are also expensive. The average price of a new car in 2019 was over $26,000. Used cars , on the other hand, sold for $8,400.

If fixing used cars can save money, imagine the savings when salvaging parts from a junkyard. On average, customers pay 80 percent less for disassembling the parts themselves. At the U-Pull-It event, customers only pay $50 for all they could carry, rather than piece-by-piece.

Door panels, hoods, and truck beds hold extra parts. Darrah appreciates the creativity it takes to not only pull apart a vehicle but to craft a carrying method. He witnessed one man tying car parts to his body with three to four seat belts, “wobbling down the walkway trying not to fall over their hanging parts.”

In addition to serving as operations manager, Darrah is a part owner. His grandfather, Harry Darrah II, owned Darrah’s Automotive-Recycling located at 535 E. Prospect St. in York. After his death, his children took over and continue to operate it.

Conspicuous consumption, a phrase coined by sociologist Thorstein Veblen in 1899, describes the way Americans show off their social class. Some people parade around in expensive clothes and flaunt their large houses. When automobiles grew in popularity in the 1950s, hot rods became the new status symbol. While many Americans still prefer new cars, the U-Pull-It event shows us that we also like to repair our old cars, too.

The Bureau of Transportation Statistics reports that automobiles are on the road for an average of 11.6 years. In 1995, it was 8.4 years. This means we’re maintaining our vehicles longer.

The act of harvesting, spotting value in discarded waste, lives on in the salvage yard. Their consumption, unlike the status hungry elites, could be described better as inconspicuous.

In Junkyard Planet: Travels in the Billion-Dollar Trash Trade, Adam Minter explains the necessity of junkyards.

World War II demanded combat-ready vehicles. This required factories to convert into military facilities, forcing Americans to fix what they would otherwise exchange. However, the post-war boom meant we could again abandon the old and buy new. In 1951 alone, over one half million light trucks and 3.7 million cars were scrapped.

During the 1950s, workers disassembled vehicles by hand, using axes and other tools to save the previous copper, aluminum, wood, and fabric within. Steel mills gladly purchased the steel for America’s growing infrastructure. Mechanization replaced manpower with the invention of the giant shears.

In 2006, Joe Darrah purchased the salvage yard business from Bud Eichelberger, the founder.

Now, father and son work hand-in-hand. At J&K Salvage, Joe uses a shredder to process material for the steel mills. When he needs material, Harry sends his father a couple hundred cars.

Unfortunately in the 1960s, steel mills stopped buying cars from junkyards. Even small bits of copper left in the automobile will weaken steel. With recycling nearly impossible, abandoned cars collected by the millions.

Deserted vehicles erupted into an environmental crisis. Oil leaked from engines. Gas dripped from tanks. And rubber decayed into the soil. We looked for other options. Florida piled cars in the ocean, hoping it would build the reef. Alaska dropped thousands of cars off a cliff.

Yorkers first noticed the accumulation of automobile graveyards in 1932 when The York Dispatch reported that the City of York outlawed them. Hanover Borough passed a similar ordinance the same year.

Abandoned vehicles got so bad in West York, council passed an ordinance in 1950 that made parking them on borough streets a jailable offense. Three years later, automobile graveyards were prohibited in Dover Township, according to The Gazette and Daily. By 1964, Americans junked more than five million cars, reports the American Planning Association.

Eventually, the eyesores got to be too much. Lady Bird Johnson “beautification” project required the concealment of junkyards by building fences. Fences around the eyesores of automobile graveyards became U.S. law in 1968.

The Darrahs use a system so they can shred vehicles for recycling. Darrah explains how it works:

“In about 45 seconds a car would be shredded into hundreds of pieces  eight inches or smaller (that’s the size of the grates 8inch holes). The material then is cooled off on a shaker table then carried by a large conveyor belt to a series of three magnets that separate the ferrous (magnetic metal) from the rest of the material like fluff (plastics, car seats, carpet, ect), copper, aluminum, stainless. The material then is cleaned and picked over so that the steel Mills get a pure ferrous material to be melted down and made into a new product. J&K Salvage is considered a processor because it has the capability of processing mixed materials and coming out with a raw usable product. The rest of the material from the car that’s not magnetic then goes through an eddy current system where the copper wire, stainless, and aluminum is all separated as well. You are then left with a fluff product that is used as cover fill at the landfills.”

As much as many would consider junkyards an eyesore, Eichelberger’s U-Pull-It event uses two of the three Rs: Reuse and Recycle (omitting Reduce because, as I point out, people are still driving). The most recent data says that it cost 61.9 cents per mile to maintain a vehicle. We unthinkingly wear down our vehicle with every trip. Because of this, salvaging used parts is more cost-effective than ever.

I take for granted that my car will work, getting upset when the oil light or low tire pressure comes on. I look forward to watching the men and women scavenge the broken-down vehicles for parts they could breathe new life into. I have a lot of respect for their perseverance and ingenuity.

My York County ancestors: One a powwower, the other a juror in the 1929 Hex Trial