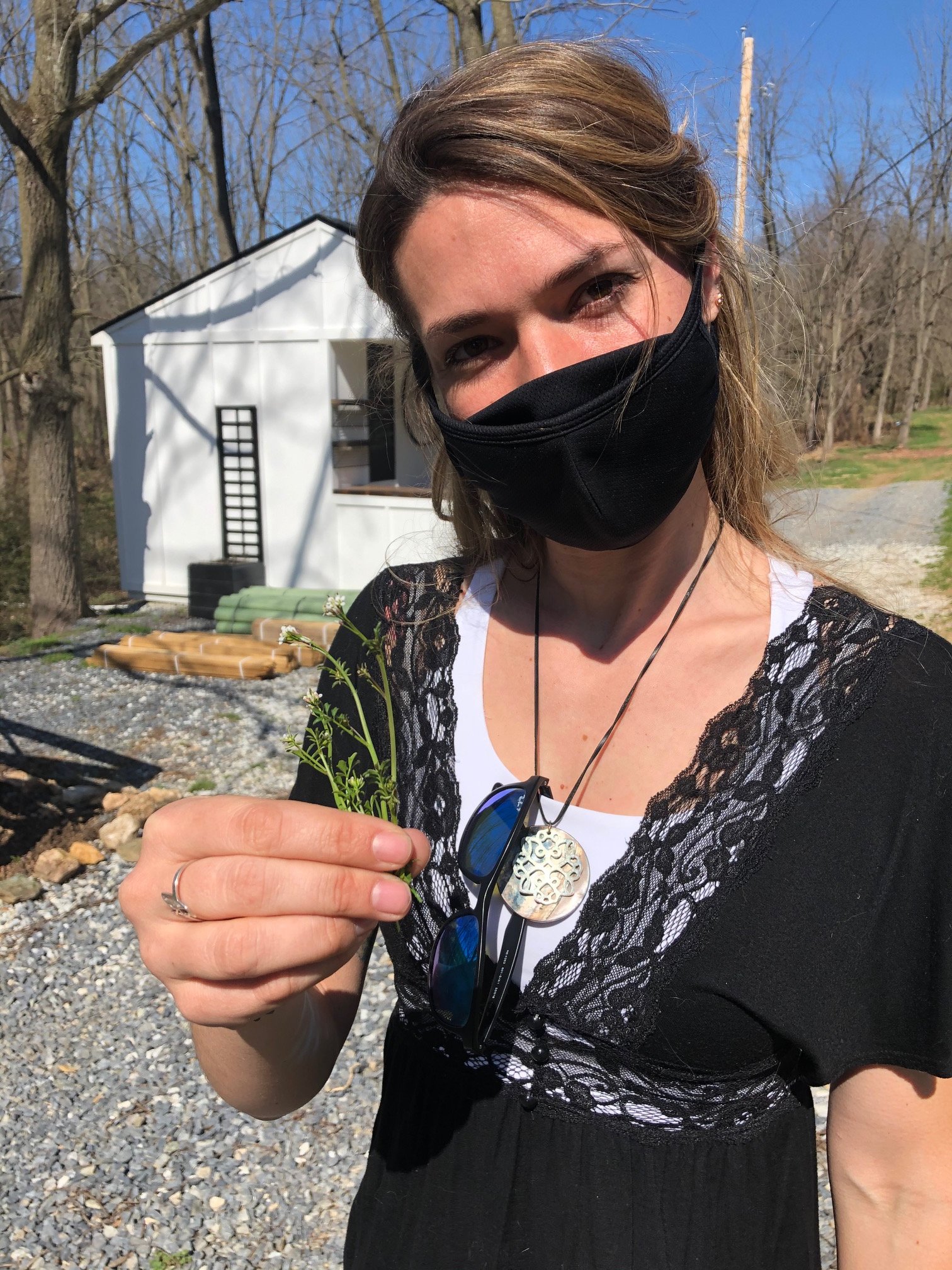 This is Bittercress, and it tastes like broccoli! Davidson recommended that beginner foragers only eat about a fist-full of new food. That's because it might not settle with our digestive system. Jamie Kinsley Photo.
Posted by Jamie NoerpelMarch 30, 2021March 30, 2021 Wandering in York CountyNo Comments

Eating ‘weeds’ on a Spring Grove farm: First-timer’s fun in foraging for food

“Walk slowly, placing one foot after the other,” Elizabeth Davidson cautions. A group of eight walk among the trees, scouting for edible plants. The mid-morning sun warms our backs as we traverse clumps of grass.

Back in September, I wrote an article on foraging for pawpaws. Finding food in the woods inspired me to learn more about nature’s foods.

Forage Culture, a company out of South-Central PA and Maryland, teaches novices and experts what plants and fungi they can and cannot eat. The founder, Elizabeth Davidson, guides us through the “wild food store” at Terra Farms of Spring Grove.

At first, most of the green things growing from the soil look similar. However, after one hour I spot subtle differences. The class helps dispel our “plant blindness,” meaning the inability to see differences in the plants in our own environment.

Now, I see that tiny white flower that resembles a tiny rosette amidst the other plants. It’s called a Bittercress, and it’s from the same family as broccoli. Since we know nothing was sprayed in the area, we try it. It tastes great! All of a sudden, a new culinary world opens up where there used to only be weeds and grass.

Since we are foraging on a private farm, Davidson stresses good etiquette. “Please just don’t ever take stuff without giving back,” she says. She recommends bringing a dish with foraged ingredients or bringing a portion of your harvest back to the owners.

Additionally, the rule of thumb is to only take 20 percent of a certain type of plant. “Do not take everything,” she says. “That’s not nice.” Davidson’s experience as a dance teacher translates well to the outdoor classroom. She explains things in a way that helps us remember and feel comfortable sharing and asking questions.

All this foraging made me curious about our ancestors and why they switched from hunter-gatherers to farmers.

In his book Guns, Germs, and Steel, historian Jared Diamond explains the shift from foraging to agriculture.

The Fertile Crescent located in the Middle East is known as the cradle of civilization. These were the world’s first farmers. For those who settled and planted their food, their sedentary lifestyle meant they could birth as many children as they could feed. Agriculture meant more access to calories. As a result, families grew with the birth of more children.

Nomadic people, on the other hand, had to space their children out. Since they had to carry them, parents waited until their babe could walk — around 4 years old — to birth another. They used lactation as a natural form of birth control in addition to abstinence, infanticide, and abortions.

One benefit to agriculture was the ability to specialize. In a hunter-gatherer society, everyone must find food. However, in societies where farmers grew a surplus to feed others, some people were free to study, learn, and lead. Stored resources also meant full-time soldiers. This specialization allowed some civilizations to expand, therefore develop technology and imperialize others.

One of the drawbacks of these developed civilizations was the stratification of class. Agriculture and the growth of societies cultivated the haves and have-nots along with the crops they grew.

A hunter-gatherer society, on the other hand, operates on a more egalitarian model. They have less things to protect, so they aren’t as focused on weapon development. A farm family with roots deep into the soil needs to be able to defend itself against thieves and attackers.

Today we can find all our food at the grocery store. However, I love knowing that the earth still provides foods palatable for the human diet. Even though I can purchase all my meals, I think it’s fun to forage as a hobby.

Foraging during the Civil War

I began to think about how hungry people on the move ate during other times in American history. “Foraging was of critical importance in many campaigns,” Scott Mingus tells me about Civil War soldiers, “but it usually involved raiding someone’s farm or garden for food.”

Famished soldiers seized opportunities for a bountiful meal. The thought reminds me of movie scenes where people snag steaming pies from kitchen windows, leaving behind a dollar or two. I wonder if the Civil War soldiers paid for any of the food they consumed.

In his book Gettysburg Glimpses, Mingus quoted Thomas Aldrich of Battery A, 1st Rhode Island Artillery. In a place called Woodgrove, he and his comrades found blackberries.

“It was quite a sight to see the line of men, as far as the eye could reach, filling their caps, hats, buckets or anything that was available for that purpose,” Aldrich wrote. The plentiful fruit stained the wheels of the battery as they crushed the berries with their weight.

I wonder if the Civil War soldiers would have eaten chickweed if they knew it was edible. During our forage class, the water-filled chickweed leaves gleam in the sunlight with a brilliant green. We try it. Again, we’re delighted with the fresh new find growing in our backyards. What used to be a weed is now a culinary treasure.

With COVID restrictions waning, taking a foraging class would be a fun way to get the family out in the nice weather. The outdoor classroom at Terra Farms also means you can pick flowers with your family.

When I go foraging, I’ll bring a backpack with supplies. That includes duct tape, ibuprofen, clean gauze, antihistamines, two clean bags (one for roots and the other for leaves) and scissors.

I think the first thing I’ll look for is Garlic Mustard, an invasive species brought from Europe as a food. I’ll boil the leaves while they’re still young. The roots, Davidson taught me, will make a good horseradish substitute.

“The power is knowing the questions,” Davidson says, and the class gave me a foraging foundation.

If you go, you will start looking down when you walk because you will be a forager, too. 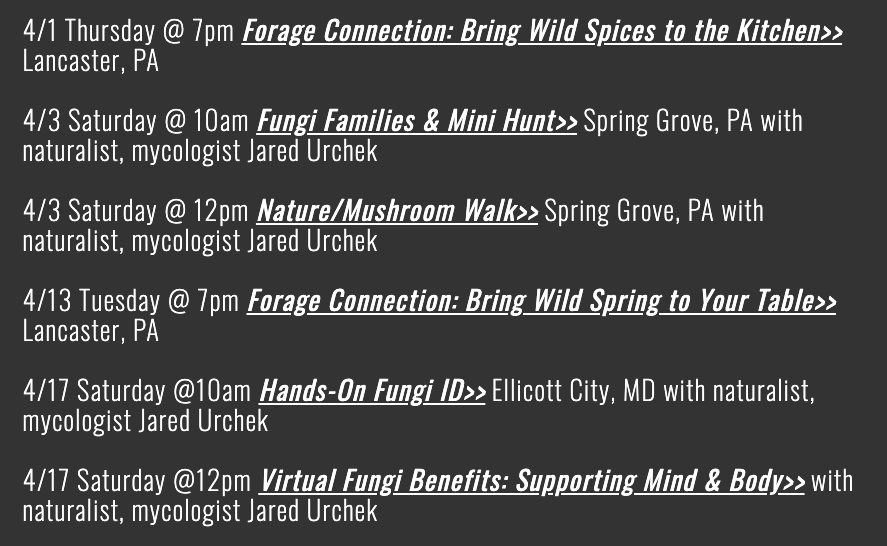