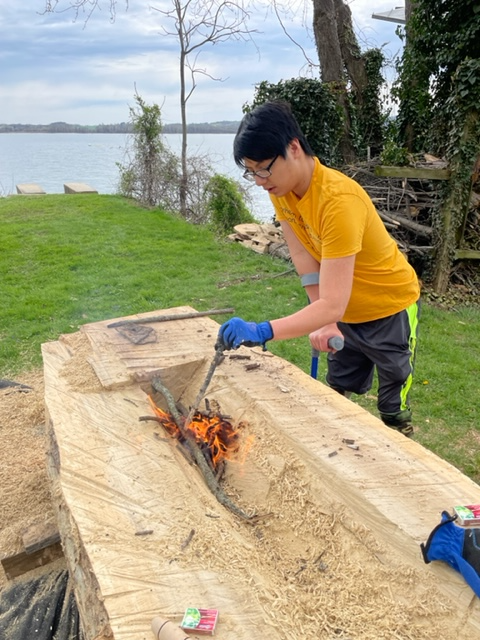 Read Part I of this article: How to make a hand-dug canon, using a Native American blueprint

As the Scouts of America’s highest achievement, earning Eagle Scout isn’t easy. It requires years of work, active attendance and participation, references from community members, merit badges, leadership experience, and a rigorous review process. Put simply, dedication and service is a must.

That’s why only two percent of eligible Scouts have earned their Eagle Scout award since the birth of the program in 1912. Today, there are roughly 2.5 million Eagle Scouts, including famous ones such as Steven Spielberg, Neil Armstrong, and Bill Gates

If I would have joined the Scouts, I would have planted a community garden for my Eagle Scout project. Unfortunately, I never joined. Girls couldn’t be Eagle Scouts until just a few years ago. But, the inaugural class of female Eagle Scouts graduated in 2021 with almost 1,000 names of young women being added to the list – a first in the organization’s history.

Who was the first Eagle Scout in York County?

After Sample graduated from York High School in June that same year, he quickly departed for Pratt Institute in New York to major in chemistry. He found a job as a control chemist for a sugar company at Ensenada, Puerto Rico, frequently radioing his parents, still in York, about his productions and his return home when the sugar season concluded. I found Sample’s 1926 obituary – Unfortunately, he was 25 years old and is buried at Prospect Hill Cemetery.

A century ago, 100 years ago, other scouts from York County met the president of the United States. A 1922 York Daily Record article reported that 144 youths visited Washington, D.C. to offer President Warren G. Harding a special gift – a dozen white roses from the White Rose City.

It wasn’t uncommon for the Boy Scouts to give white roses at appropriate events. A wreath of white roses on the unknown soldier’s grave in Arlington, and another Eagle Scout placed a similar wreath on President Washington’s grave in 1922.

One of the reasons Noah wants to earn his Eagle Scout rank is to prove that kids with physical disabilities, like himself, are just as capable as anyone else. Noah stays positive, finding ways to overcome obstacles. But he hasn’t let barriers limit his life, including carving out his own hand-dug canoe.

During the project, Noah focused on the process, learning as he went. At times, he found himself facing unexpected challenges. “I was surprised by all the wood I had to gather to burn,” he says, “It took a lot of time.” He also unearthed knots while carving the boat which were extremely difficult to remove. “The angle across the grain is difficult [to cut]” he says. So, he found a different way to angle his adz.

In 1927, a 14-year-old from Westminster named Gordon Gilbert Power wanted to be an Eagle Scout. According to The Evening Sun, he fell from a tree a few years prior, permanently disabling his arm. Despite his setback, Power earned his badges in pathfinding, fire fighting, and handicraft. While in his cast, he didn’t waste time earning his art badge.

Power was told that his disability would prevent him from earning the title “Eagle Scout.” Why? Because he couldn’t pass the test that required him to save a drowning person. The scouts tried to offer Power an “achievement badge” – awarded to “proficient but disabled boys.” Power wouldn’t accept the accommodation. “Gordon was determined to be just as high-flying an Eagle as any of his friends,” the article read.

His friend, Tom Miller who was also an Eagle Scout, helped him train for months. Finally, the rescue test came. He jumped overboard, fully clothed, retrieving an underwater 10-pound weight. To demonstrate his knowledge of resuscitation, “he was able to do it only by the skillful use of his knees,” the article reads.

“When it came to breaking the death grip of a drowning person,” the article read, “for the first time it began to look as if Gordon’s handicap might prove a little too great.” Like Noah, Power was determined. “Not even ‘drowning’ persons were willing to have their little fingers in danger of being pulled off by a determined rescuer.”

Both Power and Noah Platts have the grit and ability to pass all the tests, mental and physical, for that Eagle scout rank

I watch as Noah heaves his adz into the tough wood. His tenacity is stronger than any fallen tree. “Would you do it over again?” I ask him. “It was worth it,” he answers. “Checked it off my bucket list.”

Noah will schedule his final review in the upcoming weeks to earn Eagle Scout rank, and he plans to donate it to the Zimmerman Center for interpretive work. I’m predicting this young man will continue to see potential in fallen trees and other obstacles.