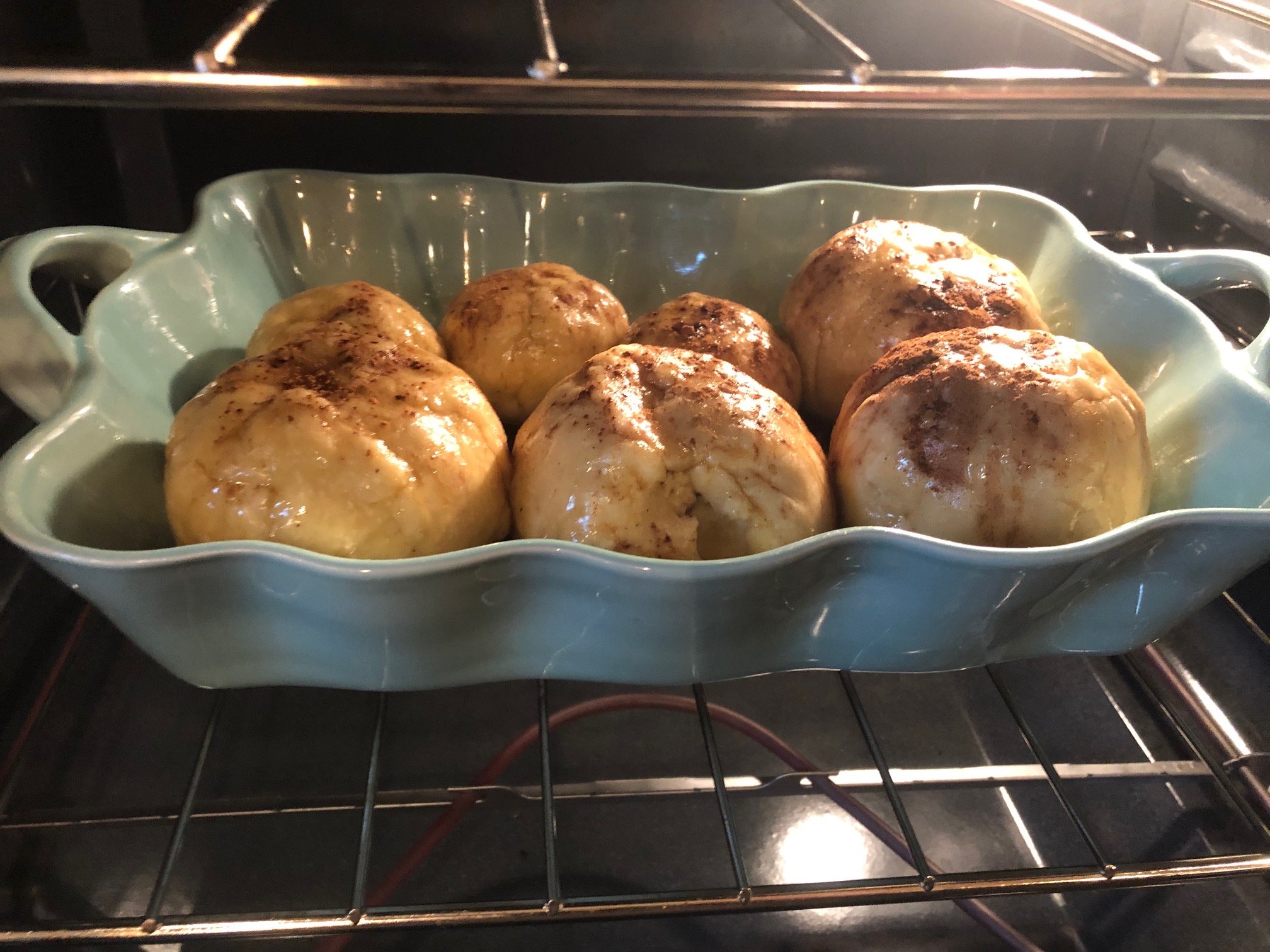 It’s the weekend, and I want to make apple dumplings.

As always, I call my Mama, Wanda Tyson, for baking advice. When I ask her for the recipe, she says dismissively, “Well, there’s nothing to it! You take your apples and your pie dough and you bake it!”

Years ago, Mama sold pies to friends and neighbors, making well over 200 pies around the holidays. She still has the recipe memorized.

“Take four cups of flour, a cup of Crisco, a quarter cup of lard, and two teaspoons of salt.” She tells me to mix the ingredients together and add cold water to get the consistency I’m looking for.

She tells me that the Crisco and lard can be exchanged rather easily.

An 1878 article in The York Dispatch says people with delicate digestions should make the dough out of potatoes. Using one part flour and six parts potatoes “boiled and mashed thoroughly and every lump removed.”

“I use Golden Delicious apples, but you know that,” Mama reminds me. “Just peel your apples and add butter, sugar, and cinnamon.”

Then, she instructs me to create the glaze. “Take sugar, water, and butter and then just heat it up and spread it on top.” As the apples bake, she tells me to brush some of the juice back on the top of the dumpling.

She assumes the knowledge of the measurements have been passed down through the bloodline. It has not, but I hate to let her down by admitting my ignorance. So, I guess I’ll be winging it. One way to learn is by experience, even if that means failing a time or two.

I began to wonder where she got her recipe. She tells me she knew two men from Springvale, near Red Lion, who baked pies long before she started her own business: Calvin Leiphart and Reynold Hall.

When I ask Mama how she knew Reynold, she says “You know how it is in the small towns, everyone knows everyone. I don’t know how I knew him, but I just knew him. I think I met him at a picnic.”

Moments like these remind me why I love York County: Neighbors helping neighbors and my grandmother’s knowledge. She “just knows” people and recipes alike.

The next day, I set out to make my own apple dumplings

Why does my dessert look so dumpy?

Anna Barrows in an 1888 article in Good Housekeeping explains where the term “dumpling” originated. She reports that the lump of dough that encased the apple was “unceremoniously dumped” into a kettle of boiling water, resulting in the “dumpy shape.”

My apple dumplings are also dumpy, but for other reasons.

I follow my Mama’s recipe, mixing the dough and cutting the apples. Everything goes smoothly until it comes time to roll the dough. I recently moved, which resulted in me losing a few items along the way.

After scanning my kitchen drawer for a few minutes, it dawns on me — I don’t have a rolling pin.

My solution? Smash the dough into the countertop with my fingers until it’s flat. It looks like a hot mess, but that shouldn’t affect the taste.

Side note: Thank you to all my friends who illuminated a simpler solution — a wine bottle.

Not everyone likes apple dumplings

Patty Sparkle, an author published in The Phrenological Journal of Science and Health in 1891, despised apple dumplings. When reading her article, I couldn’t help but laugh at how much she contested them. I can only imagine her as a keyboard warrior today, harshly commenting under YouTubers and Bloggers who dare recommend the old-fashioned apple dumpling.

Here’s an excerpt so you can read her hatred for yourself:

“The old-fashioned apple dumpling conceals beneath its harmless looking exterior much of suffering and ill temper that might have been avoided if the said apple dumpling had never been invented. The cunning looking little things are tossed into a pot of boiling water, and allowed to boil and boil until the crust becomes as tough as rubber boots. Of course, after having been subjected to the boiling process for so long time they have very little taste left when brought on the table, but they are eaten for the sake of cream, sugar, and nutmeg or other sauce. Not any for me, I thank you!”

She even compares apple dumplings to the devil: “The people who are made complaining and crabbed by the temptations of these dumplings attribute their cross words and bad temper to the temptations of the Evil One.” A few lines later, she writes “The innocent looking dumpling is crammed full of deception and guile, and rarely ever meets with an accuser these, for his Satanic Majesty is made to bear the blame of all the dumpling’s offenses.”

Finally, she ends with a coup de gras that made me laugh out loud at her writing wit: “And I state it mildly, these abominations of desolation, these culinary Lucifers.”

I don’t know for sure, but I highly doubt Patty Sparkle was from York County. When looking at old newspapers from our area, locals had a much different perspective on the dessert.

“The country that has not yet evolved the apple dumplings is away back,” read another 1903 article in The York Dispatch, “and is without a feature largely contributory to the real enjoyment of life.”

My apple dumplings may have resembled culinary Lucifers when they came out of the oven, but they added to the enjoyment of my life (even if that meant laughing at myself). And yes, I do now own a rolling pin.

Thank you, Mama, for all your baking advice! I doubt my apple dumplings will ever be as beautiful and tasty as yours.