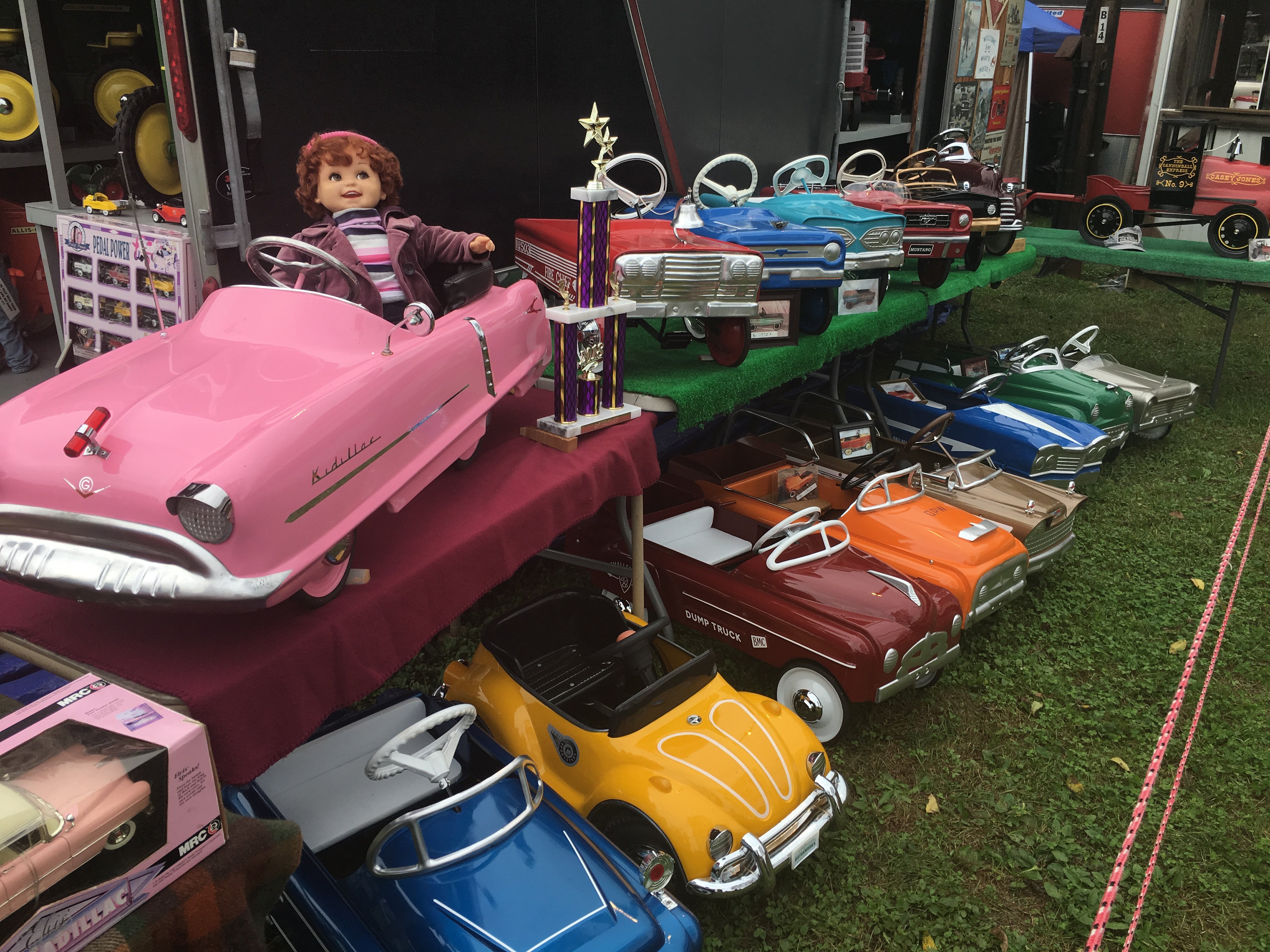 If you grew up in York, you probably remember riding around on a pedal car or tractor as a kid. Even though I grew up in the 1990s world of hot wheels, I still remember flying down grassy knolls of  Yoe, my hometown, with

the pedals of my green metal tractor spinning out of control.

For some, pedal tractors occupy a special place in our childhood nostalgia. In the modern era, we live in a paradox where we idealize the past while longing for novelty.

Today, people form identities around the things we buy, so purchasing and enhancing collectibles stabilizes us in time. Holding things from our childhood gives us a solid, material item to grasp and thereby remember.

For others, these toys are companion objects well into adulthood. Bob Druck is in that group. Bob is from Brogue collects and restores pedal cars and tractors.

More: Flu closed the York Fair a century ago

Bob started collecting pedal cars in 2010. Within the past eight years, he grew his collection to almost 200 pedal vehicles.  He shows them at Fawn Grove Olde Tyme Days, Dover Olde Tyme Days, and Center Hall at Penn’s Cave, among others.

Originally made of cast iron, the pedal cars and tractors assembled after WWII are made of metal or plastic. Bob first sands down the paint, revealing the clean metal underneath. After repairing any broken parts, he adds the final touches of detail to complete his reclaimed art piece. He then expertly paints primer and then the original color, taking care and time to add all the wonderful details to his craft.

According to www.pedalcarplanet.com, the first pedal cars date back to the 1890s, when the first automobiles came to market. Kids would race down the dirt roads like old-fashioned gangs.

During World War II, the demand for metal temporarily ceased the production of pedal cars. And before that, the Great Depression also limited our spending money resulting in small sales.

Throughout the decades, manufacturers modeled their cars after the most fashionable automobiles of the time. For example, the 1965 Mustang looked almost identical to the actual vehicle.

In the 1970s, new safety precautions marked an end of an era. At that point, pedal cars were traded in for the incorporation of plastic. Furthermore, to cut costs the toy manufacturers simplified the design, ditching the aesthetic of adult automobiles. Because of the switch, many argue pedal cars started their transition from toys to collectibles, switching their function from a toy to an artifact of our past.

Today, however, pedal tractors go for a few hundred dollars. On its website, Pedal Tractors offers a limited edition pink pedal tractor for a whopping $389.95. In fact, experts claim an original Model T Ford pedal car from 1922 would be worth $2,800 in today’s money.

For transparency, Bob Druck is my step-grandfather, so I’ve had “insider access” to his practices and skills. For a long time, he and my grandmother – Wanda Tyson but to me is Mama – went without the internet in their retirement home.

It wasn’t until Bob and my Mama wanted to research pedal cars before they purchased their first computer. In addition to looking up the price and looks of the pedal vehicles, they also researched the value of my Mama’s infamous salt-and-pepper collection. Owning hundreds of iconic shakers such as Mr. Peanut, Mama’s salt-and-pepper shakers will be designated to her five grandchildren in her will so they will get their favorite pieces of the collection.

Once they could freely surf the web, Bob and Mama looked up the original pedal cars’ appearance. Now, he could order the decal stickers, wheels, horns, and other accessories that adorn the toy vehicles.

This weekend, he shows his collection of pedal tractors at the Steam-O-Rama in Windsor. Held from October 4th through the 7th, this year’s Steam-O-Rama marks the 61st annual event. The event goes until 9 p.m. today and runs from 9:30 a.m. to 4 p.m. on Sunday. Admission is $5. More details: Steam-O-Rama.

For Druck and others who collect their childhood toys, they reject the throwaway world of consumerism. Rather than simply dispose of our forgotten favorites, their craftsmanship revives the shine of their prime.

“The satisfaction of turning something rusty into something nice,” Mama told me over the phone, “is the reason why we show. We show them because people enjoy seeing the pictures of the originals and what they look like when we’re done and people seem to really appreciate what he puts into it. We get a lot of compliments. A lot of the comments we get is ‘we used to have one of those when I was little.’ People thank us for bringing them and showing them. It’s all a part of our personal satisfaction.”

Likewise, my grandparents are building a community in Windsor, Pennsylvania.

Bob and his son, Troy, crack corn with their machines for people at the event. The corn comes from a neighboring farmer who gifts Bob three bags for free.

Richard Billings, also known as Peewee, works as a mechanic. He uses his skills to help others at the Steam-O-Rama.

If someone’s tractor won’t work, Peewee is there to help them get it running.”It all comes natural to me,” says Peewee. “I rip a machine apart and put it back together again. Watch it run!”

No money ever passes hands. It’s a favor economy where people help each other. It’s never “what do I owe ya?” says Mama. They just help one another for the sake of helping.

In addition to sharing their hobby with others, Bob and Mama won a trophy from Dover’s 2018 Olde Tyme Days for “Best overall display.”

But for Mama and Bob, its more than just a hobby.

They want to preserve our heritage. Mama frequently tells us at Sunday dinners that the world changes too fast. With the pace we’re moving, items such as pedal vehicles will be forgotten.

When people like my grandparents and others at Steam-O-Rama take time to maintain artifacts of history, they guarantee its legacy lives on for future generations.

To experience nostalgia is to experience something that evokes sights sounds, smells, tastes, and feelings of something in our memory. Time and space are so elusive, we are in a constant state of mobility; this constant change generates a longing for the past.

Bob and Mama bring the past forward when showing and sharing their vintage pedal toy cars and tractors of our yesteryears.