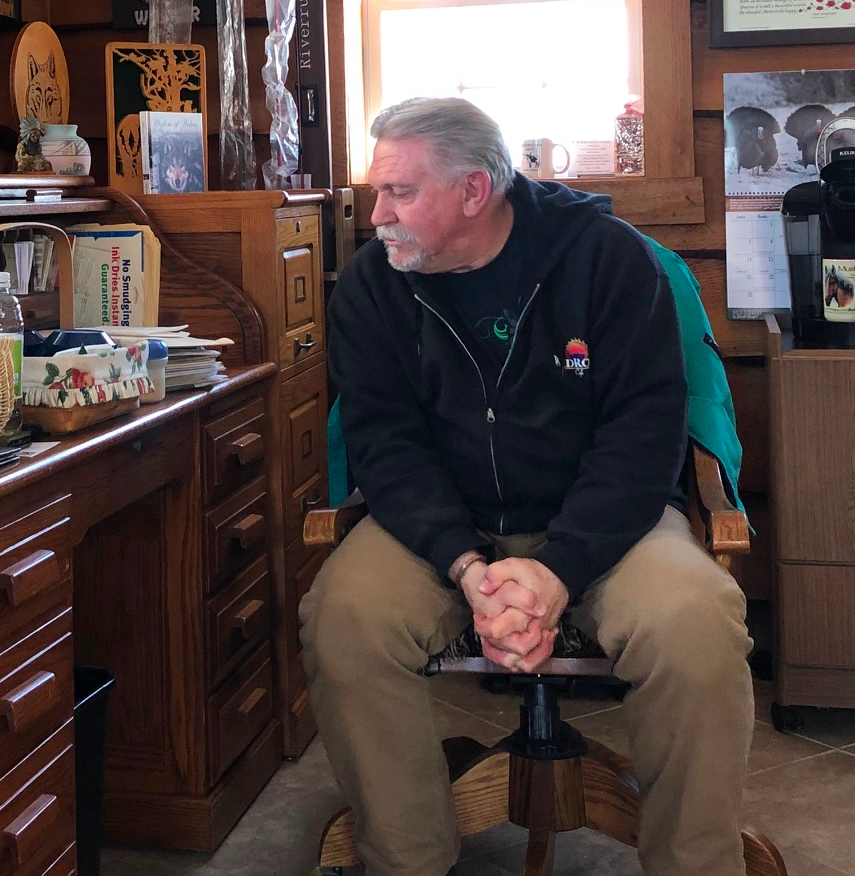 For people like Dean Smith, looking out the window at his preserved farm gives him hope. The land was broken, but he and his wife, Vicki, restored it so nature flourishes alongside them. Jamie Kinsley Photo.
Posted by Jamie NoerpelMarch 16, 2021March 16, 2021 Wandering in York County1 Comment

Therapy in Nature: This Dover couple turns to land preservation to heal

I walk into Dean Smith’s office, doubling as his man cave getaway. There, we chatted about his life with the Spotify station “Celtic Woman” playing in the background. All around us I saw artifacts from his past, all linked to a specific memory.

Pelts remind him of when he raised foxes. In the 1970s and 1980s, they were worth $250, but today they are $10-$15 due to market saturation, according to Trapping Today. Behind Dean hang ten ribbons. He and a stallion named Fire Branded HJ, Fire for short, earned them about 15 years ago during a competition. It was Fire’s first and only show, and he had just been “broken,” or trained to be ridden, right before the show.

I ask Dean about a book on his shelf called The Legend of York International, and he tells me a deeper part to his story.

Smith suffers from Post-Traumatic Stress Disorder. On Feb. 2, 1998, he survived the explosion at York International. Remembering the exact minute, Smith described the devastating effects the incident had on his mental health. His friend died that night, and it’s haunted him ever since.

“[We] couldn’t even see to get out of the building,” Dean says.  He crawled on the floor, looking for his toolbox so he could retrieve his flashlight. Eventually, he found his way outside. Out of the confusion came more confusion, as Dean and his coworkers lost account of each other’s’ whereabouts. Some re-entereded the danger, looking for people who were hurt among the sparks of electricity, smoke, and chemical fumes. “Hollywood couldn’t have built a better scene,” Dean says.

Dean believes that luck is tipped out of his favor. Earlier in life, he suffered football, motorcycle, and horse accidents that injured his back and his head. He explains that if there was a billion-dollar lottery ticket for sale on a Saturday at 7 o’clock, the person in front of him would win, or the person behind him would win, but he will never be the big winner.

To deal with his painful history of trauma, Dean turned to the soil. In 2002, Dean and his wife, Vicki, purchased 95 acres in Dover Township. One could say that the farm is his therapy. Over the past two decades, they’ve worked to increase the biodiversity by creating a riparian buffer – a place where a vegetation grows along a stream that increases the wildlife habitat for native plants, birds, insects, and animals. This past year, they preserved all 95 acres with the Farm and Natural Lands Trust of York County.

Dean and Vicki work hard to cultivate a healthy environment. They enjoy watching wildlife flourish all around their property. Considering their trauma, the land is their place to heal.

Read more about the Smith’s land preservation on a website that Jim McClure and I curate called Witnessing York.

Jamie Kinsley is a board member for the Farm and Natural Land Trust of York County. Parts of this article are featured in its 2021 newsletter.

1 comment on “Therapy in Nature: This Dover couple turns to land preservation to heal”