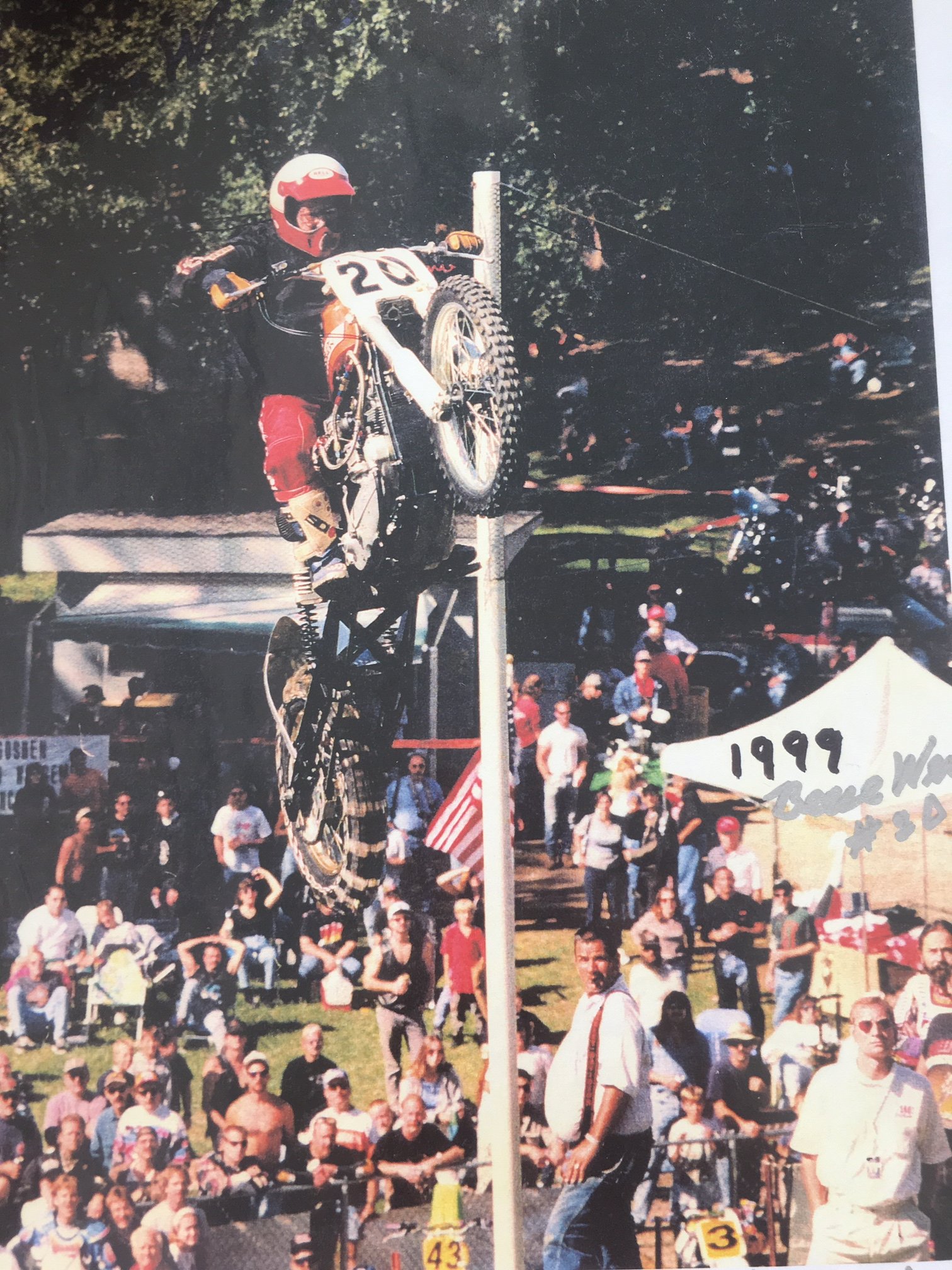 Beese Wendt soaring through the air in front of a crowd just twenty years ago when he was 62 years old. Beese Wendt photo.
Posted by Jamie NoerpelJuly 13, 2019July 13, 2019 History and Current Events, Wandering in York County1 Comment

Looking up at the steep, dirt incline of the Jefferson Hillclimb of the White Rose Motorcycle Club, Cory Stickler feels the rush.

Getting ready for the climb takes weeks of motorcycle building, hours of practicing, and washing the dirt off his body as much as his bike more than he can count. On the day of the event, Strickler walks his vehicle along the bottom of the 300 foot hill. 3,000 onlookers watch, waiting to see if he can climb to the top.

With his five years of experience, this down-to-earth country boy from Delta races with the best of the best riders. But, each run jeopardizes the safety of his limbs and his $25,000 bike.

The first time he climbed a hill, Strickler’s nerves almost got the best of him. Now after scores of climbs, his nerves still are on edge. As he twists the throttle, positioning his body forward in preparation for the 47 degree angle, his stomach lurched causing him to almost purge his lunch.

It’s not too often I get to interview a hillclimber, so I asked why he loves hillclimbing.

“The drama,” he responded.

The game of chance, squeezing on the handlebars so tight his knuckles go white, brings him back every year plus an additional seven races of the national hillclimb circuit.

The dance of man and his machine with the geography of York county’s rocks and soil challenges him. With no guarantee that he’ll make it, Strickler’s heart beats adrenaline soaked blood through his veins while sweat soaks down the back of his mullet. (Yes, you read that correctly. Strickler has a mini-mullet because “why not,” he told me.)

At the time of our interview, I stood by our camping chairs, notepad in hand, as we watched a competitor in his 1000 class beat his time by 0.4 seconds.

He said a few choice words under his breathe while his face revealed disappointment. “I wanted to win,” he said as his eyes squinted in the sunlight.

Logan Sepado had beat him. But, within a few minutes he recovered and again joked around. Anyone could tell he was bummed, but he kept his soul-patched chin high and continued to answer my annoying questions.

It’s the roar of a Sunday crowd

It’s the white in his knuckles

The gold in the buckle

He’ll win the next go ’round ending.

The point is to go up as fast as you can. “I race my time,” Strickler told me, “not the other guy.”

However, at age 35 Strickler’s feeling the cautiousness that creeps up with middle-age. In a few years, he’s thinking of “retiring” to a safer style of riding – drag racing.

Beese Wendt would chuckle at that Strickler’s young age since he raced until he was in his sixties.

Malcolm Truman Wendt, better known as Beese, climbed Jefferson’s hill until he was 63 years old. Born in 1936, Beese earned his nickname (or as he calls it, his “title”) because he won the “B” Class so frequently. Others say it was from his love of his BSA motorcycle.

Around the White Rose Motorcycle Club, Beese attained local legend status. He’s won more than 50 professional hillclimb races and 7 national awards – 4 in the U.S. and 3 in Canada. In 1965 and 1966, he earned the national championship for “B” class and in 1969 won the Class A national championship.

Now 82 years old, Beese’s finally got his face on the poster and the club’s t-shirt. “It only took me 60 years,” Beese told me while holding a cold Miller Lite in his hand. Without saying a word, another member cracked the beer opened and handed it to him – then I knew he was the king.

“It’s hard to not keep coming back,” he said.

He helped build the hill, so he takes care of it. Like most things in life, we feel a sense of pride and ownership that comes along with hard work.

It’s a strange paradigm – to conquer a hill on two wheels only to have to add dirt, rake out the ruts, and maintain the access road so large machinery can reach the summit. But, like many who scramble to the top, a love-hate bond links the motorcyclist with the ground.

The hill – one of the steepest in America – runs short and fast. With two steps, it looms against the southern York County skyline.

Waiting to be overpowered? Laughing at the ant-like men at the bottom? Who knows? But, since 1952 the hill beckons riders to attempt the ascent, earning the title “King of the Hill” for those who make it. 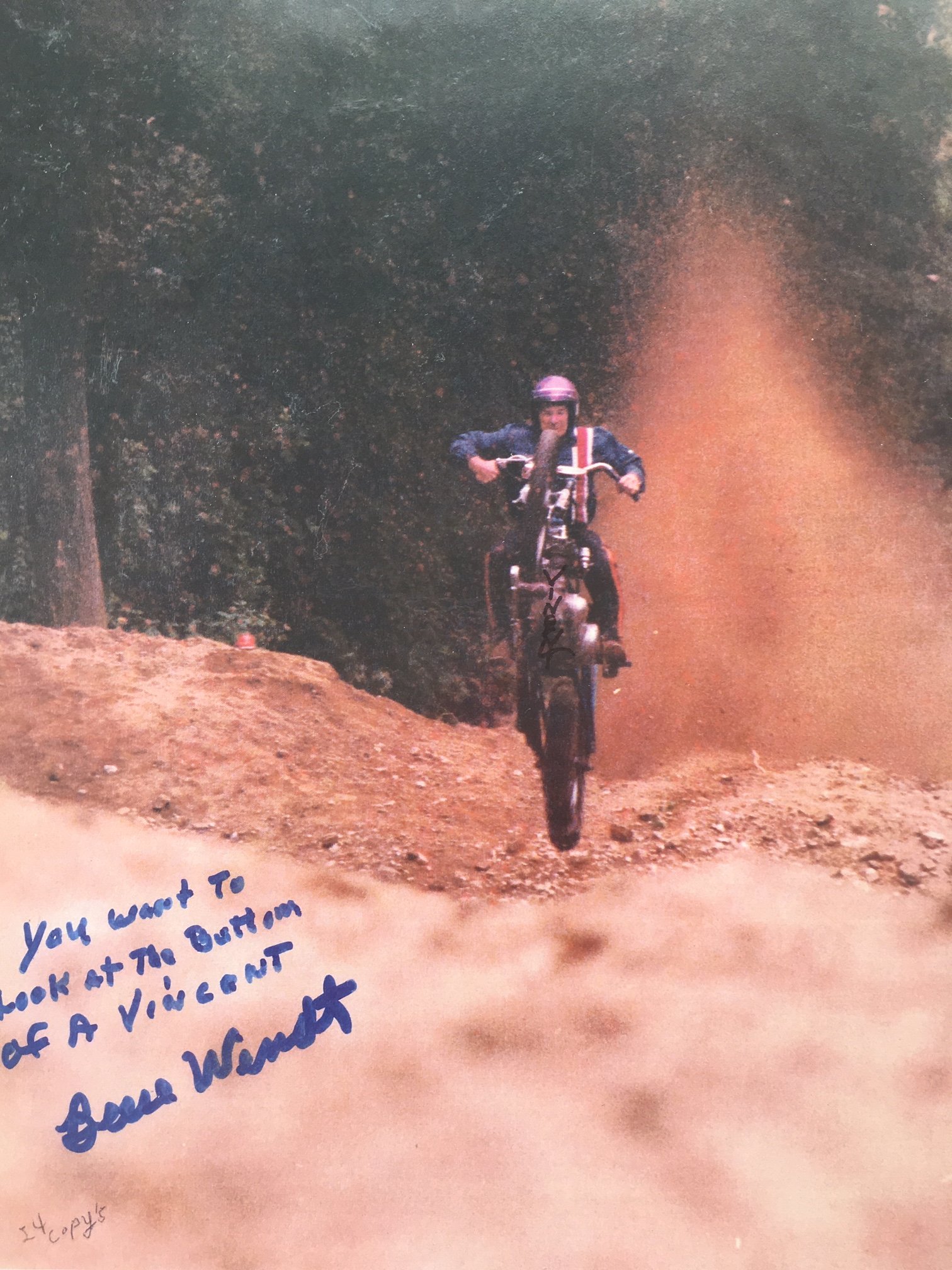 Beese learned from the older guys – Tom Paradise, Herb Reiber, and Howard Mitzel. But now it’s men like Beese, now the older guy himself, that help riders like Stickler.

Strickler echoed Beese’s advice. They both found friends who traveled with and supported one another through hillclimbing.

As Beese demonstrated, it’s never too late to try the sport. I asked Stricker what he would say to someone looking to start riding, “Do it,” he said, “you only live once.”

You can see Strickler ride and Beese watching on Sept. 21 at the next Jefferson hillclimb

Check back in September when I write about the history of the White Rose Motorcycle Club.