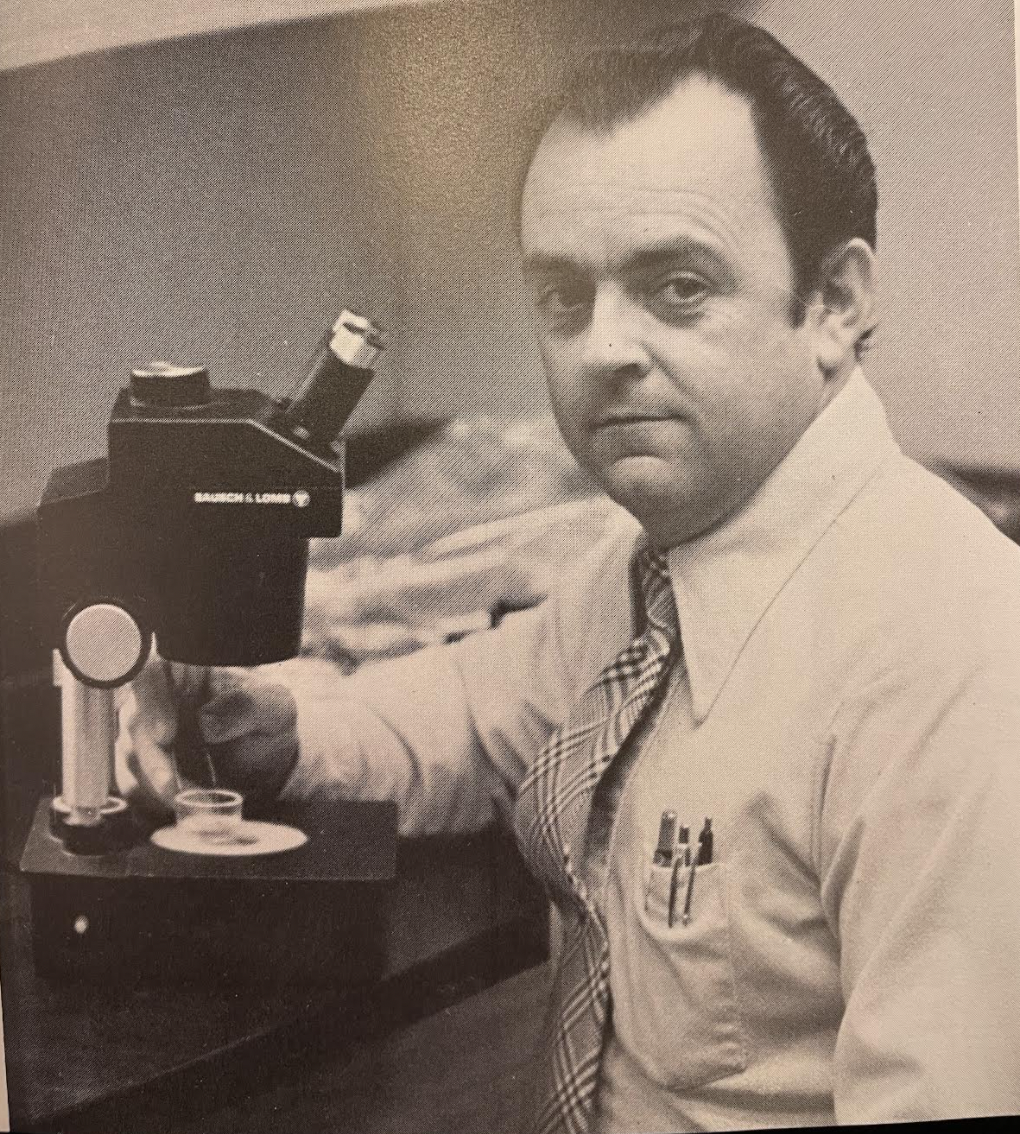 As a child growing up in Yoe, I spent many summer days in the creek that ran behind my yard. We’d build dams, catch minnows, and run for our moms’ aloe when stinging nettles brushed against our bare legs.

However, my fun ended abruptly when my best friend told me she wasn’t playing in Mill Creek anymore.

“There’s poop in there,” she said.

Over five years of playing, I never saw or smelled any poop. But her mom told her. Her mom! Moms know everything, so it must be true. At 10 years old, parents hold the ultimate authority.

In the moment, multiple perspectives and contradictory evidence can muddy our interpretation (Ever since the COVID outbreak, we can all relate to the difficulty of deciding which source we can trust, and which ones we can’t).

Wise or unwise, I decided to ignore the poop claims and played in the creek anyway. I’d take my chances — the crawdads were waiting.

At the time, I had no idea that my 1990s sport-fishing was preceded 20 years earlier by a respected professor. His name was Dr. Robert Denoncourt, and he would become my step-grandfather.

His pioneering work would give deep insight about the health of the Codorus as a fishery and wildlife habitat.

‘No fish could live in Codorus Creek’

After earning his doctorate in zoology (Ichthyology) from Cornell University, he began teaching biology at York College (1969). Denoncourt’s fish expertise launched him into action rather quickly when someone claimed “no fish could live in Codorus Creek.”

Out of all the water in York County, one-third of it drains through Codorus Creek, directly impacting 60% of the population at the time Denoncourt commenced his stream work. In addition to people and their homes, 22 out of 40 industrial pollution sources discharged directly into the creek.

Furthermore, Codorus Creek’s ill-smelling and filthy infamy, earning it the nickname “Inky Stinky,” dates back at least to the 1920s when reports of sewage and industrial waste blackened the water.  Some say pollution goes as far back as 1816 when York Water formed, offering clean water.

However, conditions improved in 1967 with pressure on the state to clean up the waterways. We have a high school student Christopher Wickstom along with the Izaak Walton League to thank for their 13,000-signature petition sent to Governor Raymond. Ultimately, the state legislature voted to have the Codorus cleaned up.

After three years of stream rehab, could fish finally survive in the Codorus? Denoncourt wanted to find out.

His research started small. Denoncourt would divide his college students into three teams: fish, insect, and chemical. The fish team dragged the water with a giant net, collecting fish to examine and classify. The insect team scoured the creek banks, lifting up rocks to do the same with insects and macro invertebrates. The chemical team tested temperatures, nitrates, and oxygen. Their presence or absence would indicate the creek’s health.

The York Dispatch reported in 1970 that Denoncourt cataloged 24 species of fish and 21 species of invertebrates at four locations from the mill dam in Spring Grove to Beaver Street. They believed the abundance of fish and diversity could make York County a warm water sport fishery. The water wasn’t perfect, but oxygen and acidity levels meant fish could survive.

This groundbreaking research is believed to be the “first published record of a biological study in Codorus Creek,” according to The York Dispatch article. This initial study, now 50 years ago, has provided researchers with a baseline, thanks to Denoncourt and his team.

The next year, however, Denoncourt came under attack when he claimed that the Codorus Creek was coming back to life. Assertions of “A local miracle,” by the York Daily Record (1971) caught the attention of the Environmental Protection Agency.

The EPA’s suspicion led to a surveillance and analysis report. The Codorus, the EPA wrote, was still “chemically and bacteriologically polluted.” In fact, the section of creek below the Glatfelter Paper Co. in Spring Grove was “close to biological death,” a representative said at a speaking event at York College.

Denoncourt sat in the audience, listening to the EPA’s conclusion. He didn’t like what he heard. “He’s wrong,” Denoncourt said. “What we’ve found (in the Codorus) doesn’t indicate a ‘healthy creek,’ but there are considerable fish and insect life there.” The EPA agent countered that more than 100 municipalities and companies dump their waste and raw sewage directly in the Codorus, including Yoe’s Mill Creek — the one I played in.

Denoncourt’s son, Butch Denoncourt who taught science at Dover High School for 18 years, remembers receiving several telephone death threats from “publicly spirited citizens.” One even accused Denoncourt of releasing fish into the creek so he could catch them for his study.

No one would have blamed Denoncourt for shrinking from the public spotlight, but he didn’t — he actually stepped up his game.

For the next four years Denoncourt and his team analyzed distribution and abundance of macro-invertebrates (crayfish, snails, mayflies, dragonflies, beetles, etc) and fish along 15 different locations in York County. He remained open to the findings, whether that proved him right or wrong.

Here is what they found:

Right up stream from York City, the team discovered foliage and underwater plants that indicated a healthy system. However, by the time the survey team reached Spring Grove, only seven fish were found (compared to 1,545 specimens found in an upstream borough creek).

“The West and Main Branches of Codorus Creek on the whole are moderately polluted,” Denoncourt told a York Daily Record report in 1975. “Undoubtedly industrial and domestic wastes from the municipalities contribute to the decreased dissolved oxygen.”

That means pollution was happening, and it was happening here in York County. You can read the full report HERE.

In the beginning, Denoncourt set out to see if “no fish could live in Codorus Creek.” His fish collection proved this wrong. However, his statements appeared misleading, making it seem that Codorus was healthier than it was.

A federal investigation and public pressure prompted him to revisit the creek again, resulting in a more holistic and comprehensive view. The EPA’s reports could have discredited Denoncourt, but he seized the opportunity to gather more information instead of allowing his ego to get in the way.

Actually, he worked alongside governmental agencies to expand water knowledge. In 1972 he, along with two state representatives from the Environmental Resource Department, spoke at a Sierra Club seminar where he described how to monitor the quality of streams. He served on the taskforce to develop Nixon Park in 1974. And in 1979, he was chosen as the Who’s who in Education in the first international edition.

Most importantly, his research called attention to how York Countians were damaging our environment, impacting our regulation of water quality and paving the way for the immense beautification initiative to clean up Codorus Creek taking place in 2021.

In 2016, my mom, Anastasia, married another one of Denoncourt’s sons who is also named Robert. In November 2021, Denoncourt passed away at 89 years old. During his short time as my step-grandpa, he didn’t share much about his impact on York County’s waterways including the controversy. But he did share his love of the outdoors and fishing with his students and family.

He kept a file with dozens of letters from students. Inside one, the student signed his name “Smartassius Labassistius.” Clearly, Denoncourt’s sense of humor transferred to his students.

“I thought you might enjoy this article,” another reads,” since you are actually responsible for it. Attached to the letter is a newspaper article about Denoncourt’s former student turned science teacher.

I found a poem he wrote in 2002 called “The ‘Inbetween’ Wishing World.” In it he references his children and grandchildren writing, “What do they remember… what do they think of me? There was, there is, I feel it. — Love. We may be worlds apart, but we are still together.”

Special thanks to Karen Rice-Young at the York College library and archives for helping me locate many of the sources used in this article.