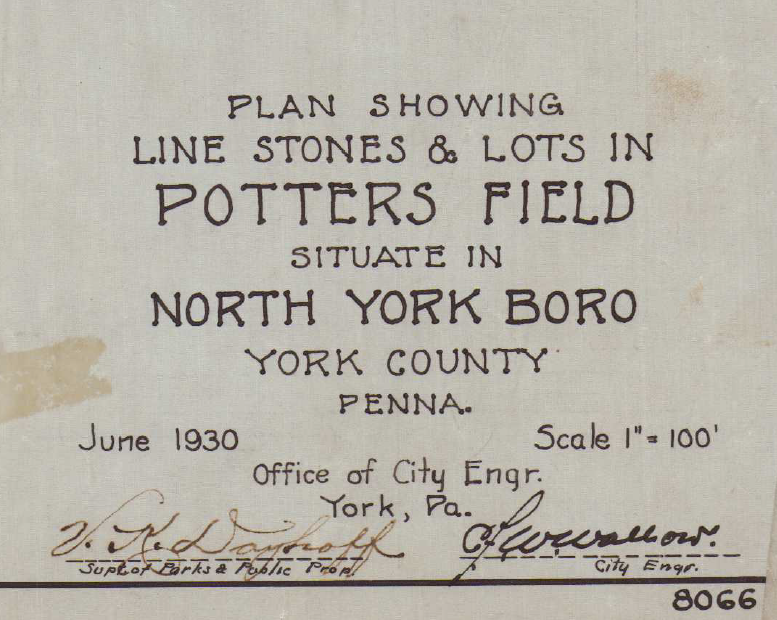 This is one of very few documents that identify who is interred in the City Cemetery.
Posted by Jamie NoerpelFebruary 2, 2021June 29, 2022 Wandering in York County1 Comment

Jamie and the Friends of York City Cemetery are raising funds to install a permanent memorial. You can contribute by visiting Preservation PA’s donation page.

I like to watch how people treat “the help.” It’s a way to glimpse inside the person’s character.

I come from a working class background. My mother, for example, cleans houses for a living. As a single mom without the ability to pay for childcare, she often brought me to work.

She’d give me five dollars to whip the baseboards during the commercials that ran between Rugrats — a special occasion since we largely relied on my family recording shows on a VHS for our VCR (As I re-read this, I’m realizing how old this makes me sound!).

Some of my mom’s clients welcomed me with warmth, granting me access to their cookie jar or outdoor trampoline. However, there were others who clearly thought of us as “the help.” They made me feel less than them by not allowing me to play or avoiding eye contact when they talked to us.

Thankfully, these people were out numbered. Most of my mom’s clients were extremely generous, thinking of us around the holidays and asking about school.

How we treat people we deem lesser reflects who we are — this goes for the living, and departed.

Walking through Prospect Hill Cemetery, I notice the elaborate headstones. Beautiful iconography adorns countless monuments to people who made a difference. Survived by their loved ones, their legacies stand strong in the granite and limestone thanks to the caretakers of the cemetery and the financial investment of their families. Their final resting place boldly symbolizes their permanency in this world, even when their lives ended.

While passing through one afternoon, I noticed a vacant lot adjacent to the cemetery. I’m not a sentry, but I never see kids playing there nor people walking their dog.

I wondered why, until I read Jim McClure’s article called “York’s Potter’s Field exhumations center of early dispute about disease.”

What happens to a deceased person’s body when the coroner cannot identify it? The remains go to the City Cemetery, also known as potter’s field, along with those who cannot afford to purchase a burial plot.

For decades, the city used a plot of land near Penn Park, placing the dead in bare wooden caskets to be interred alongside the nameless others without markers.

To make room for a new York High in 1897, the city exhumed over 600 bodies, moving them to their current resting place along Schley Alley and W. 7th Ave. in North York.

If Prospect Hill certifies memory, an honorable tribute is lost in the potter’s field. The headstones can signal the individuals’ worth both in respect from their family and in financial value.

The burial plots can express the survivors’ affection for their loved ones. The potter’s field, in contrast, has exhibited perceived earthly failures through social anonymity.

The term “potter” comes from the Bible, Matthew 27:3-8. Judas Iscariot wants to repent for betraying Jesus. He offers back 30 pieces of silver. The priests refuse – the silver is blood money in their eyes. Instead, the silver is used to purchase land to bury the poor. That land happened to be where the local potters excavated clay – hence, potter’s field.

A person can be oppressed if their identity ranks socially lower than others. Andrew J. Nelson writes more about this in “Finding Those Once Lost: The Analysis of the Potter’s Field at Woodland Cemetery, London, ON.” In this case, class inequalities shaped their experiences as much in death as in life. Marginalized groups such as these felt social death long before their physical death.

Tina Charles, a volunteer for the Friends of Lebanon Cemetery, gave me some insight into the intersection of race and class. Before Lebanon, some Blacks were buried in potter’s field. She said a depression opened up last year in the City Cemetery because they didn’t use vaults back then, causing the untreated wood to decompose along with the body.

What can we do?

Ami Miller, executive assistant for Prospect Hill Cemetery, believes a proper plaque would be one way to redeem our past neglect.

Michael Shanabrook, a city planning engineer from 1977 to 2002, showed me a map that identifies those buried after the 1897 move. During the 1897 transition, 600+ people were moved to the area labeled “Double row of graves” to the left of the map below. With the additional graves added after 1897, the City Cemetery is up to around 780 unmarked graves. Shanabrook believes the last unidentified person was buried there in 2004.

While we don’t know exactly how many people are buried in the City Cemetery, there are ways to detect unmarked graves through geophysical detection methods.

All of this cost money, and I am not suggesting we allocate public  funds toward this project. Rather, I want to bring attention to the issue to inspire someone to get the ball rolling toward better remembering our struggling ancestors.

According to the National Funeral Directors Association, the 2019 national median cost of a funeral with viewing and burial was $7,640. Let’s come up with a plan so people who can’t afford a burial can still be remembered.

Today, many bodies still go unclaimed. After 10 days, the coroner’s office cremates the body. In 2020, York County had 50 unclaimed bodies that families were unwilling to pay for their funeral. Due to genetic testing and dental records, very few bodies remain unknown. Pam Gay, York County coroner, told me it’s been a number of years since someone has been unidentified. 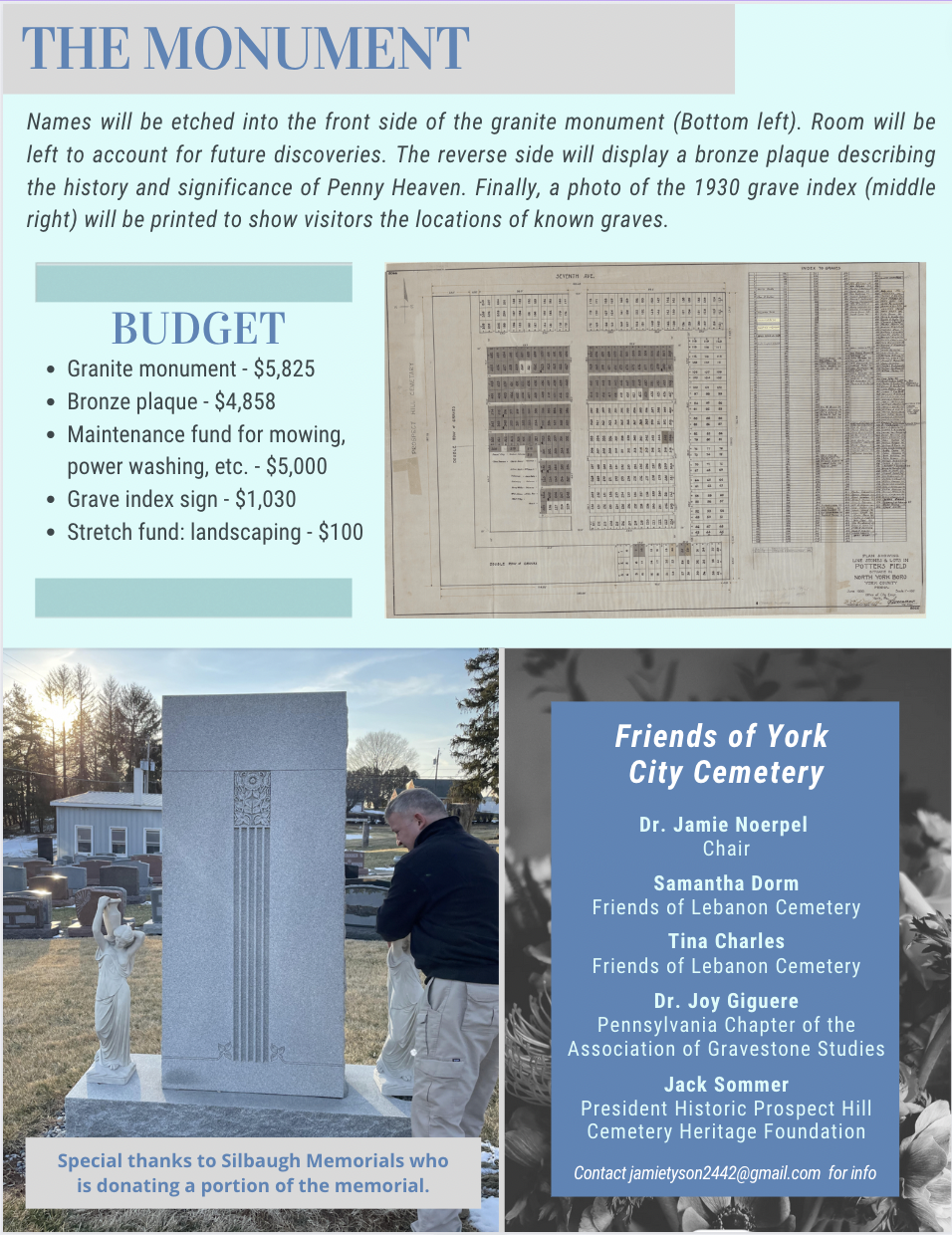 Earning second honorable mention in an 1895 poetry contest, Robert A. Landis wrote a poem called “Potter’s Field” which was featured in The Gazette. In it, he empathized with those banished to the forgotten plots:

Far from the merry city
Where men buy seldom roam,
There lies a cheerless, dreary place,
The stranger’s graveyard home.

Far from the merry city
Where men buy seldom roam,
There lies a cheerless, dreary place,
The stranger’s graveyard home.

Shunned by the happy people,
By hedges half concealed;
Is bare of trees and ornaments,
The quiet Potter’s Field.

No need is here of splendor gay,
As poor as was their life,
May be their last and lonesome hoe;
End of a weary strife,

You see no marble columns here
Proclaiming rank or fame,
The rough and weather-beaten boards
May scarcely show a name.

No tender flowers bud and bloom
And spread their fragrance round;
The outcast stranger covers but
A cheerless, barren mound.

Some were, that never knew a soul,
That joy and comfort gave,
And lie in dreary Potter’s Field,
Forgotten in their grave.

But some, may be, had loving friends
And scorned a helping hand,
Some mournful hearts may  year for them
Yet somewhere in the land.

A vision sad and full of woe
Rests in deep memory,
That once upon a Potter’s Field
I saw a mother weep.

Full many may yet proudly walk
The smoothed path of life,
That will yet crushed by grief and pain
In Potter’s Field arrive.

And time and earth, impartial both,
Same power do they wield
In richly ornamented tomb,
As in the Potter’s Field.

Rest peaceful in your lowly grave,
You strangers, poor and lone,
You’ll find more merry and more joy
Before the highest throne.

Although your lot was hard on earth,
And weary was your strife,
You may not find a Potter’s Field
In that eternal life.