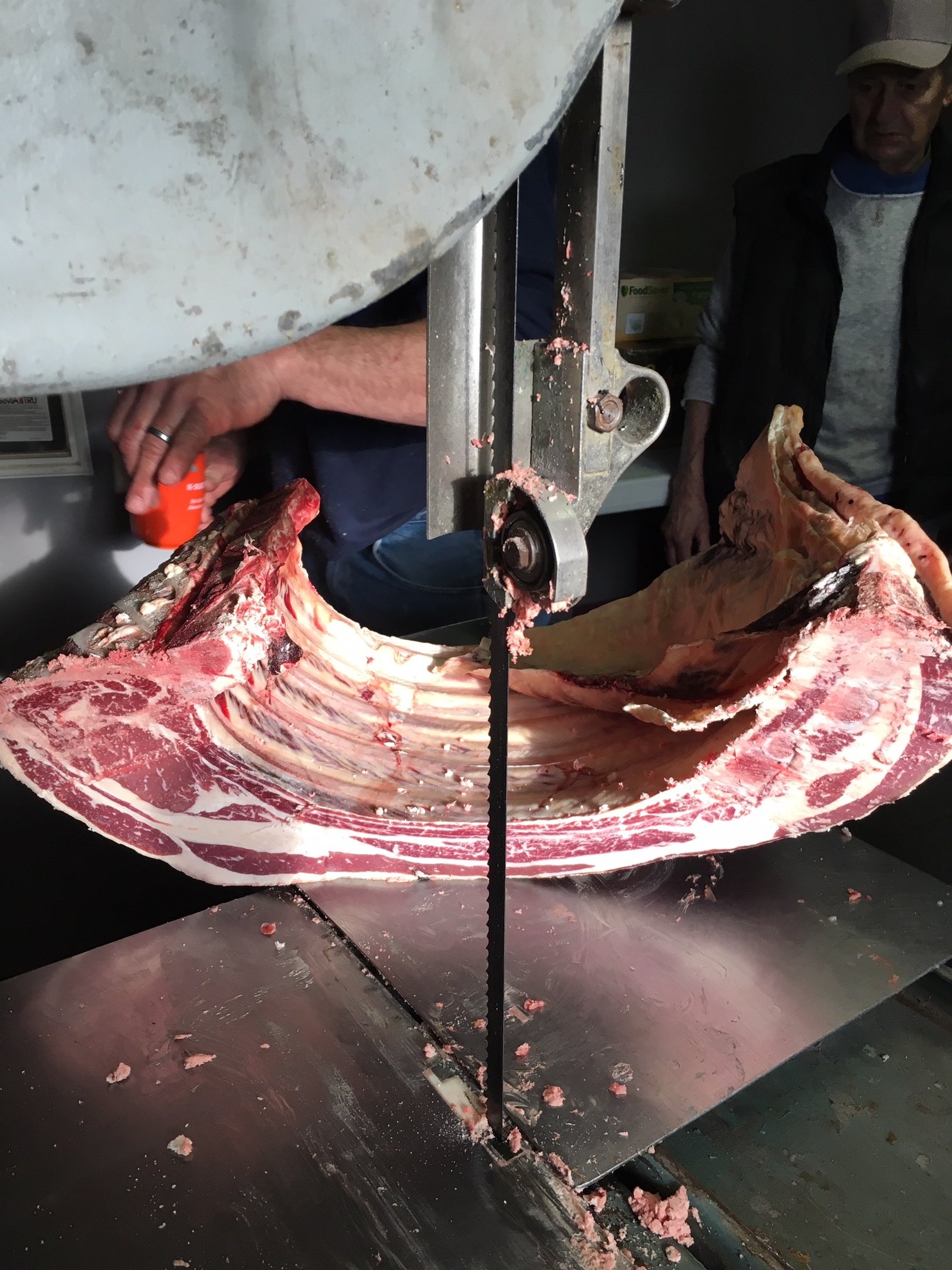 Ever heard the phrase, “Want to see how the sausage is made?” Usually people are referencing a scene that may gross the viewer out. However, this article will literally show you sausage being made.

York County’s long history of growing our own food

One hundred years ago, Yorkers raised their own food. They marched outside in the dead of winter to clean out the hog houses, de-freeze the chicken water, and add more straw to the animals’ bedding.

Once the harvest season came in the fall, our grandparents and great-grandparents dug up their potatoes from the earth, canned the green beans, and preserved those delicious strawberries into strawberry jam.

Sometimes, farming and homesteading could be challenging, especially when it came to taking the lives of the animals they raised all year long. But if they wanted to consume meat, they had to kill the very livestock they protected and raised.

Today, most Yorkers visit Giant or, if they are conscious of geographical-sourcing, the local butcher. Wrapped in clear, clean packing are the white chicken breasts or the ground hamburger. We absentmindedly pick up the meat without thinking where it came from.

This summer, I’m going to start my dissertation on homesteading in York County. The main reason why I’m interested in people in my community who grow, preserve, and eat their own food is because I do it myself. I have five chickens for eggs, cultivate a modest vegetable and herb garden, and butcher a cow and pig each year.

The cow comes from a local farmer, Ray Manifold from Stewartstown. On about 15 acres of land, he raises about 25 steers to be sold to families in the region. For 18 to 19 months, after the calves are born from heffers impregnated on his own farm, the cows spend 18 hours in-doors relying on corn, barley, and hay grown right on the farm. The remaining six hours of the day they graze and drink the water from a fresh running stream.

After the animals reach about 1,200 pounds, they are sent to a local slaughter and butcher shop – Godfrey Brothers in Loganville. Godfrey kills the animals, skins them, and slices the carcass in half. An inspector from the USDA comes on the day of slaughter, only Tuesdays, to approve the carcass safe for human consumption.

For the Tyson family, my father’s side, this process occurs in January or February each year. My dad, Dale Tyson, and/or brother and his wife, Alan and Ciera Tyson, pick up the beef up from the butcher shop. Once it arrives at my dad’s house in Red Lion, the family begins preparing the meat. The next weekend, they pick the pig up from Godfrey’s as well.

First, my dad and brother remove the beef from the truck. Next, we use a Biro saw, number 33 which is a medium size saw, to cut the half into small parts to make the carcass more manageable.

While my step-mother cooks us breakfast, second breakfast, and lunch, the rest of the family start hacking away at the steer.

We take one of the front quarters of the steer and cut out the prime rib, or the rib steaks section, starting with the five ribs off the end. Then, we cut the top of the front quarter off which is the chuck.  We cut out the roasts followed by the lower section of the arm, or the brisket. Sometimes, we use that section to make our own corn beef.

Whenever we get to a piece of flesh that wouldn’t taste so good, whether it’s too gristly or too fatty, we throw it into a tub for burger.

Once we cut out all the steaks and roasts, we grind the burger. The pieces are pushed through a trough located near the top of the grinder. The a spinning wheel pushes the pieces through sharp metal holes about the size of a nickel in diameter. My father warns me each year, “Your fingers can fit in one of those holes so watch it.”

We’ve been lucky, but what we’re butchering is a carcass that’s similar to the human body. One wrong slip and the saw blade could sever a finger.

This step in the process only cuts the burger hunks half way. We change the metal piece to holes that are much smaller, only about the size of a pencil eraser cap, to get the consistency we want.

Finally, we package the meat. Burger goes in freezer-safe plastic bags while the steaks and roasts go into plastic bags that we use a vacuum sealer to remove all the air.

Why continue the tradition?

Dad learned how to butcher beef from Ken Shaw, also a distant relative. Shaw operated a home butcher shop located near The Fiddler’s Association in Felton. To butcher a pig, my father learned from his father, Rodney Tyson, and Rodney learned from his dad, Pious Tyson. In fact, the Tysons owned a butcher shop right across from the mill on Main Street in Felton from 1950 to 1974. This type of generational education is common in York.

Pious, my great-grandfather, learned how to butcher pigs from the Smiths, a butcher shop in Red Lion during the 1920s and 1930s.

In all reality, butchering your own steer and pig costs a lot of time and money.

There is no differentiation in price between the steaks, which turn out to be pretty cheap, and the burger, relatively expensive.

When I asked my step-mom, Jo Anne Tyson, why she spends two whole weekends a year butchering, she said, “We know where that meat came from, we know where it’s been, and we always have a freezer full. We can have steak, or roast, and don’t need to go to the store with a list.”

My parents enjoy knowing there is a freezer full of meat waiting in the basement.

For my dad, he continues to butcher so he can have ownership in the dissection process. He enjoys having particular cuts of meat cut in a particular way. He says, “We don’t really save much money but we know where that piece of meat came from. We don’t have to worry if this a good cut of meat, is it questionable, or if it hit the floor.”

However, we do have disadvantages to butchering. For example, we have to ration out cuts of meat. It’s pretty easy to pull the filet mignon from the freezer first leaving the chuck roasts for later dinners. We also have to eat the whole cow, including the lesser-quality cuts of meat, that most people skip over when picking up steaks from the grocery store. So, we have to get creative when cooking.

Here are some of my family’s PA Dutch dishes we’ve passed down over the generations.

For me, I enjoy butchering for many reasons. Echoing my step-mom and dad, I like to know where the meat came from and that it was raised humanely.

But more importantly, I enjoy spending time with my family doing something Yorkers have been doing for generations – taking care of ourselves and connecting with the animals and earth that sustains us. And of course, learning how to do things others are too grossed out to do, like making sausage.