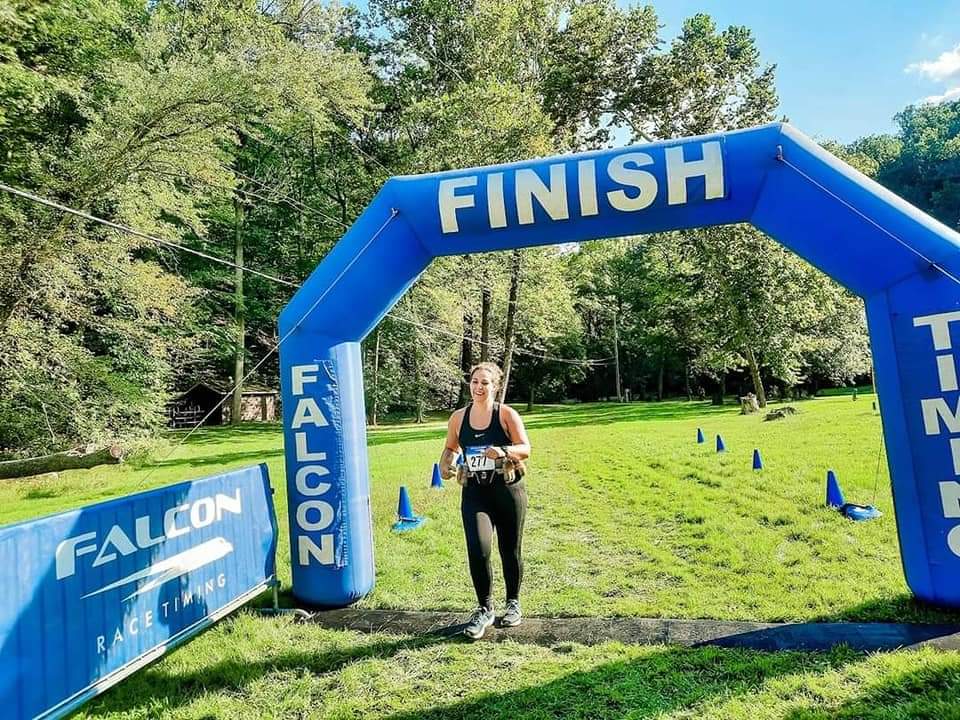 The Keystone Trails Association recently hosted its 25k and 50k Trail Challenge. Runners and hikers lined up to race the gorgeous trails along the Susquehanna River (Lancaster side). My Hometown History partner and friend, Dominish Miller, competed in the challenge in 2018, 2019, and 2021. I wanted to learn more about the event, so I dove into the natural history of  the racing route. Here are some interesting stories I uncovered.

Participants have been preparing for this race for months. Their filled water containers and fresh muscles launch them down the trail at their Susquehannock State Park starting point. The organic tunnel of rhododendrons brush their arms with morning dew as racers pass each other. Little do they know, rhododendrons contain high levels of toxins, including the nectar in the flower that attract honeybees.

If a beekeeper allows her hive to collect this poisonous nectar, the bees will create a bitter tasting and reddish color “mad honey.” Despite its beauty, grayanotoxin, a neurotoxin found in rhododendrons, will make you light-headed, sick and even hallucinate. The Greeks perceived the flower as beautiful yet dangerous, symbolizing the hidden perils of this beautiful flower native to Pennsylvania. Thankfully for the runners, they’re buzzing right past these gorgeous blooms to hit the next leg of their journey.

“During the 2021 race,” Domi tells me, “I was stung by two different swarms of bees (the first was early in the race, about 5 miles in and the second was about 3 miles from the finish).” In addition to an EpiPen if you’re allergic to bees, Domi recommends bringing along a first aid kit as well. “I came across more than one runner that had fallen and been bleeding,” she says.

Maneuvering over tree roots and rocks requires that racers to look down. A misplaced step would take even the strongest ankles out of commission. However, when they look up, they see wild groves of pawpaws.

Like rhododendrons, pawpaws are local to our area. But, they won’t cause you to hallucinate. They’re green, oblong fruit pods with black spots to indicate their ripeness, usually around the end of September. They grow on trees about six to ten feet off the ground, and the taste of this fruit is somewhere between a mango and a banana. It’s the only fruit in existence with all the essential amino acids.

What makes the KTA Trail Challenge unique is that runners pass fruits not available for sale at local groceries (unless you attended festivals like the Horn Farms annual pawpaw festival). Plucking wild fruit from nature is much more gratifying than purchasing it from a store. You get to connect with something ancient – primal almost. However, foraging is prohibited in our county parks, but pawpaws growing in our state parks are fair game, according to PA State Forest Rules and Regulations.

Thomas Jefferson, who cultivated trees in Monticello, enjoyed pawpaws. Explorers Lewis and Clark depended on them for their survival for three days while surveying America. It’s even believed that chilled pawpaws were George Washington’s favorite dessert. Despite these tasty treats calling their names, the runners have to push by if they want to complete their arduous task. Domi and I talk about pawpaws more in Episode 4 of Season 2 in our Hometown History YouTube series.

A lake on a river?

Runners continue their race north. Along their route, they gaze out at our glorious Susquehanna River. But if they look closely, they’ll see a lake on our river. How is this possible?

Construction on Holtwood Dam began in 1905, the second of four hydroelectric dams below Harrisburg. At the time, its solid-concrete, 55-feet-high walls made it the third longest dam in the world. Unfortunately, a financial crisis in 1907 delayed construction until opening in 1910. The dam got its name from Canadians Herbert Holt and Edgar Wood, two executives of the Pennsylvania Water & Power Co., who helped finance the project. This dam impounds water, collecting the eight-mile long Lake Aldred, located on the river.

As much as we appreciate the electricity from the dam, the rising water tables covered up extremely valuable artifacts now lost to the water’s currents.

Secrets of the Susquehanna River

Long before European settlers fanned out across our region, the Algonquian Indians etched rock carvings called petroglyphs into the rocks of the Susquehanna River – about 1,000 years ago. You’d think that 1,000 rock carvings at 10 different locations would mean racers could easily spot them. However, that’s not the case. Many were removed for preservation in the 1930s or were covered by soil and water from the dam.

Yet, if you know where to look, you can spot carved snakes, animal tracks, and even a thunderbird. Unlike the other 40 Native American petroglyph sites across the commonwealth, these designs are abstract and have even been called “prehistoric graffiti.” The time and care needed to engrave such elaborate designs means they carried strong messages.

Some believe the petroglyphs designated hunting grounds, others assert they document accounts of their people. Six out of seven snake symbols point to the sunset or sunrise during solstices and equinoxes, indicating astronomical significance. However, the most probable theory asserts that the petroglyphs were boundary markers.

The racers are nearing the end of their journey. They’re tired, but can almost sense the finish line as they near Wind Cave. This system of subterranean passages and crawl spaces gets its name from the constant flow of air rushing in and out. Even on the hottest summer days or cool winter months, a steady flow of cool current air escapes the two entrances, 75 feet apart. Changes in pressure and temperature forces the wind in and out, giving it the feeling of a “breathing” cavern.

By this time, the racers are all breathing hard as they glide past this unusual geological feature.

Unlike other caves that were carved out of limestone from gushing water, this cavern is from faulting and slipping of rock masses along rectangular jointing planes formed from shifts in the insoluble rock. If you visit, beware. Many have gotten lost inside its dark passageways, including four kids in 1960 who were trapped for 21 hours.

They did it. Runners and hikers have reached the end of their trek. By this time, the dew from the rhododendrons dried hours ago, replaced by sweat from hills and valleys of this strenuous race.

They run across the finish line in Pequea Township, named from a Native American word meaning “straight arrow.” The Native Americans are no longer here, save a few who work very hard to maintain their traditions. All that’s left are these names and the petroglyph carvings – tiny peeks into their incredibly important lives.

The participants in the Keystone Trail Challenge ran alongside this ancient history. By doing so, they are keepers of time, of the environment, of history.

“I really enjoy trail runs in general and I’ve found the fellow runners of the KTA to be the nicest people I’ve competed against,” Domi says. “Everyone is always excited to be there and willing to lend a helping hand.” Since its inaugural meeting in 1956, the Keystone Trail Association has been hosting events like this. Events with meaning, community, nature, and culture. I couldn’t make the race this year, but you bet I’ll running alongside Domi next year!

A version of this article was also published in the fall 2022 KTA newsletter.