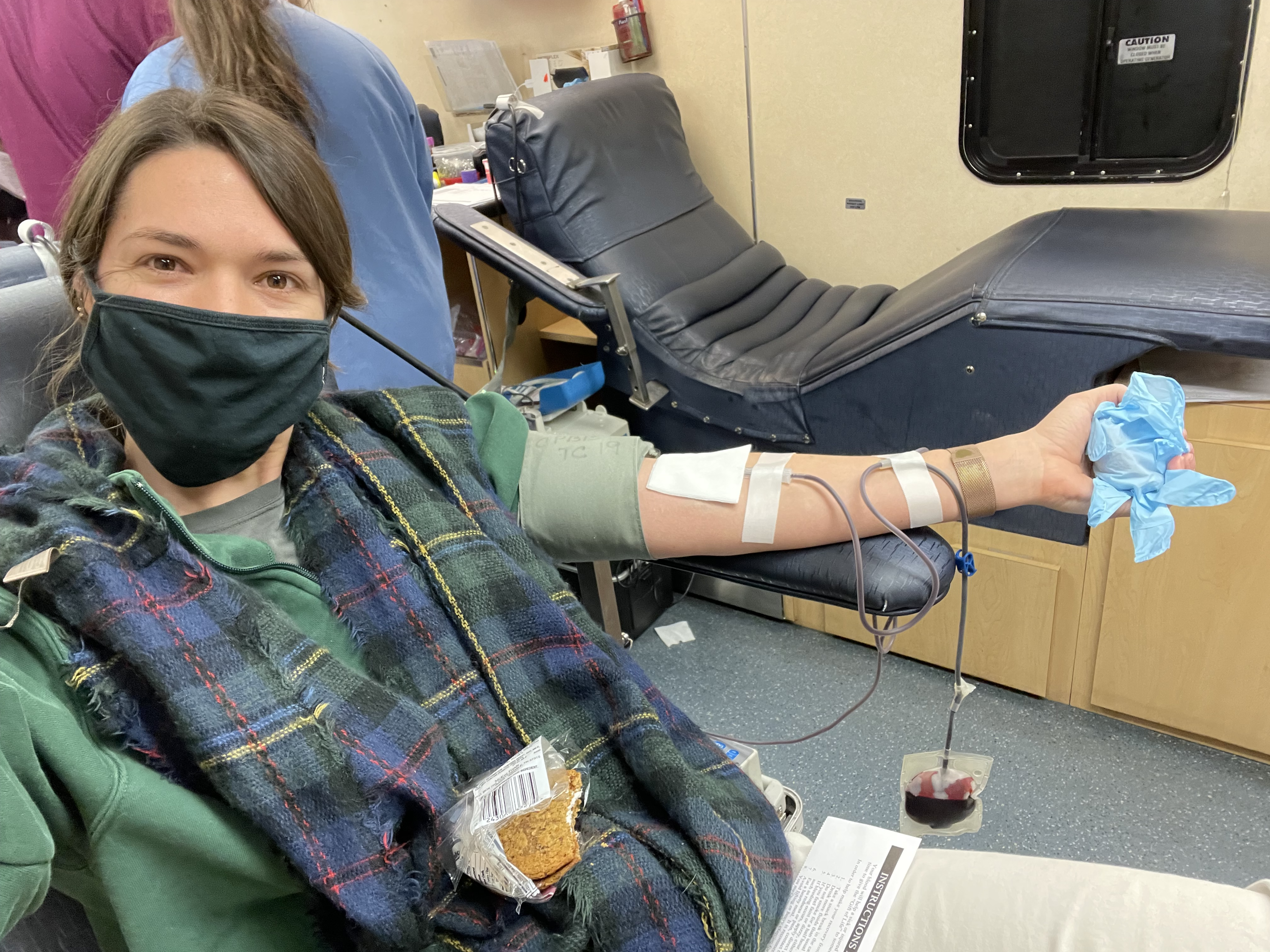 Pennsylvania only has 24 hours worth of blood supply. This need inspired my friends and me to donate for the first time in years. Now, it will be an excuse for a regular outing with my friends! Jamie Kinsley Photo.
Posted by Jamie NoerpelMarch 4, 2022March 21, 2022 Wandering in York CountyNo Comments

My hearing goes first. It sounds like I’m in a conch shell with echoes of my voice amplified in my ears. Then the peripheral vision begins to darken. The nurse tells me to lay back down on the cot as she places an icepack on my chest and orange juice in my hand.

I’ve just given blood, and I mistakenly think that quickly standing is a good idea. One pint of my A+ blood sloshes back and forth in the mixing machine at my feet. Thankfully, my friends wait patiently as I recover in the mobile bus outside the Planet Fitness in Newberry Township.

Blood banks across the country are challenged with low supplies in the winter months as well as the summer, when people go on vacation. However, Pennsylvania has only 1-2 days of supply on hand.

Victoria Connor, former director of communications and philanthropy of the York-Adams Chapter of the American Red Cross (now named the ARC of the Central Pennsylvania Chapter), believes the pandemic has had a long, negative impact. “The need for blood doesn’t take a snow day,” she tells me. “In fact, someone is counting on you right now.”

This depleted blood supply prompted me to organize a friend-outing. We met at the donation site, then went out to eat for some much-needed camaraderie in the last few weeks of winter.

Lack of blood supply shocks people into giving during WWII

Similar support systems occurred during World War II when donors signed their names to the bag labels, The Gazette and Daily reported in 1944. This humanized the donor, reminding the recipients that the red blood bag came from donors back home who wanted to see them survive.

Within 24 hours of the Pearl Harbor attack, American casualties used 750 pints of blood. Seems low doesn’t it? Unfortunately, only 750 pints were available for the 960 casualties. This realization shocked Americans into giving blood.

“Since then,” the article reads, “thousands of wounded soldiers and sailors have been given a new lease on life because someone back home took time out to donate a pint of blood.”

This included York Countians. In fact, Dr. Claud North Chrisman reported in the Evening Sun in July 1943 that two people suffered from anemia due to over donating.

Blood transfusions are now standard practice, but in the 1920s this concept scared American surgeons. It wasn’t until 1923 that a medical doctor in York County attempted it for the first time.

“Dr. Ellis successfully administered the first auto-blood transfusion in York in 1923,” a 1951 Gazette and Daily article reported, repeating it 25 times before he ended his pathology tenure at York Hospital in 1925.

Mary Lohss Burk survived childbirth at 28 years old, thanks to Ellis, and continued living for an additional 46 years.

While Burk lived out her life, Ellis continued to explore the boundaries of medicine.

After the first blood transfusion in York, he performed the first whole blood vein-to-vein transfusion in southern Pennsylvania, followed by “the first spinal anesthesia in York for major pelvic and abdominal operations.”

When a spinal meningitis outbreak hit York, 80% of its victims died. However, after Ellis administered both intravenous and intraspinal injections, the death rate dropped to 50%.

Because these concepts were so new, the same Gazette and Daily article reported that the Institute for Research and Biography of New York City called Ellis a “Pioneer in intravenous and intraspinal diagnosis and therapy.”

One of Ellis’ most interesting procedures included auto-blood transfusions. He would siphon blood left in a patient’s abdomen from internal hemorrhage, injecting the blood into the patient’s veins, after it had been filtered and mixed with an anticoagulant. While many American doctors scrutinized this strategy, Ellis’ bold actions saved the patient’s life until a blood donor could be located.

Ellis died at 78 years old in York Hospital, where he pioneered transfusion procedures. He is buried in Yoe Union Cemetery, a mere mile from where I grew up. My friends and I would walk past that cemetery on our way to the Dollar General for candy, not knowing that a medical pioneer rested there.

Today, I’m with my friends, chewing on an oatmeal pie to boost my sugar levels after giving blood. I had almost passed out, but in eight weeks I’ll be back to give more.

Bobby Kopp, a nurse and a friend, tells me that giving blood is a regulated procedure, “as giving the wrong blood is deadly,” he says. Every pint of blood is screened for pathogens such as HIV or hepatitis. Then it’s processed and refrigerated before going into someone else’s veins.

Visit The Central Pennsylvania Blood Bank or The Red Cross.

Read more on the history of blood transfusions HERE.