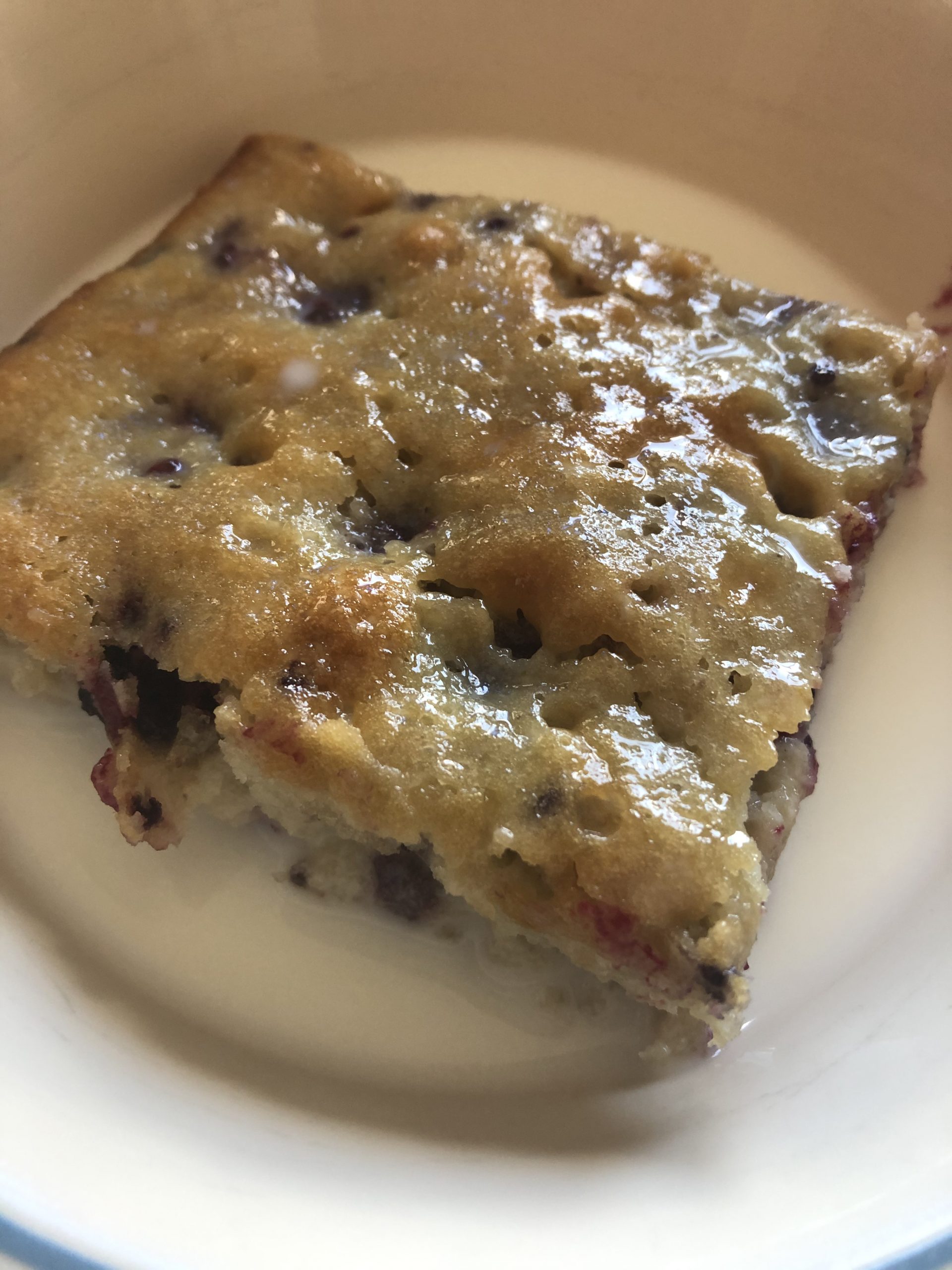 Raspberry Puddin: How a Pennsylvanian Dutch grandmother says “I love you”

While camping with my dad’s parents as a child, I would complain of boredom. Mama, grandmother Wanda Tyson, would respond lovingly, “That’s not my problem.” She’d say, “Find something to do. Better yet, sit there and be content.”

I would normally listen, finding a book or gazing at the mesmerizing flames of our campfire. For about five minutes, that is. Then I would find a rock to throw or bird to chase.

In addition to her sage advice about finding inner peace, Mama also prepares the quintessential York County food treasures: hog maw, whoopie pies, and pork and sauerkraut. Since it’s July, she’s been baking one of my all-time favorites: Raspberry Puddin! But really, who am I kidding? All of her food is my favorite.

Puddin’ is a fruit-filled cake-like meal. (Others call it “pudding,” but my family drops the “g.” No one knows why.) Mama likes sour cherries in hers, but I prefer black raspberries. I usually collect the berries from the side of a trail. There’s something special about foraging and turning my prize into a delicious meal. If I’m feeling lazy, I’ll sneak into my mom’s backyard and harvest some of hers.

When Mama was 18 years old, she left home and married my late grandfather, Rodney Tyson. We all called him Papa (pronounced paw-paw). Unlike Papa’s mother (Stella Tyson), who raised 11 children through the Great Depression, Mama’s mother (Virginia Eisenhower) chose not to spend her time in the kitchen. “She wasn’t a good cook,” Mama tells me. Mama learned most of her cooking secrets from her mother-in-law as well as Papa’s sisters.

Even so, this fruit puddin recipe was one she made sure to copy into her own handwritten recipe book. Since Grandma Eisenhower was born around the turn of the century, that means our family has been making the same dish for more than 100 years. Don’t worry, I asked permission to share her recipe. Unlike others who keep their recipes secret, we want to share ours so others can enjoy in the delight, too.

Even though a century has passed, I follow the recipe just like my great-grandmother did, starting with simple ingredients and a bowl. I cream together sugar and butter, followed by beating in two eggs (preferably from my chickens). In a separate bowl, I mix together flour, salt, and baking powder. I add about a third of the flour mixture in at one time, alternating with the milk until it’s all infused. Finally, I add the berries that are in season. With the oven warmed to 375 degrees, I bake the pudding for about 40 minutes until golden brown.

My watering mouth means I can usually hold off for about ten minutes before I’m slicing into it.

What makes this recipe so great? It doesn’t crumble when you slide your spoon into the milk-soaked sponge. Others are more biscuit-based, disintegrating into a mush in your bowl.

I’ve read of other York Countians who sprinkle sugar on top of their puddin, but the Tyson family opts out. That’s because our raspberry puddin is more of a meal. “We don’t think of it as a dessert,” Mama says. It’s a dinner meal that fills you up.

Jane Lehman, the owner of Raab Fruit Farms for example, makes her own from-scratch cherry pudding, and her recipe is nearly identical. Others have called the meal a “clafoutis,” stemming from France recipes.

On summer evenings when the family visits, we talk about current events, history, or our adventures. Like many others, food brings us together. Eating home-cooked, from-scratch raspberry puddin symbolizes my grandmother’s love. She prepares these meals for us as a way to say, “I care about you.”

We all show love in different ways.

For example, I bluntly tell people how I feel by saying, “I LOVE YOU!” But others, like my stoic father, Dale Tyson, will scratch my shoulder, silently letting me know he’s looking out for me. My other grandma, Lorann Jacobs, will give me gifts (usually jewelry she purchases from her fellow artists at art shows). Again, the words might not be there, but the action is her way of conveying her feelings for me.

Even though Mama Tyson doesn’t say it with her words, sinking my spoon into her delicious raspberry pudding is her way of expressing her love. We can feel her affection for us with every bite.

3 comments on “Raspberry Puddin: How a Pennsylvanian Dutch grandmother says “I love you””